The Taj Mahal, an ivory-white mausoleum built of marble and on the southern bank of the Yamuna River is located in the city of Agra in India. The name ‘Taj Mahal’ in Arabic means ‘Position of the Crown’ and in Hindi means ‘Crown of the Palaces’. It was built in the year 1632 by the Mughal Emperor named Shah Jahan who reigned from the year 1628 to 1658.

The intention behind building the Taj Mahal was to house the tomb of his beloved wife, Mumtaz Mahal. After the death was Shah Jahan, the Taj Mahal also houses his tomb. The complex where it is built is a 42 acre complex and it includes a guest house and a mosque. The building is bounded by gardens on the three sides and also a crenelated wall. 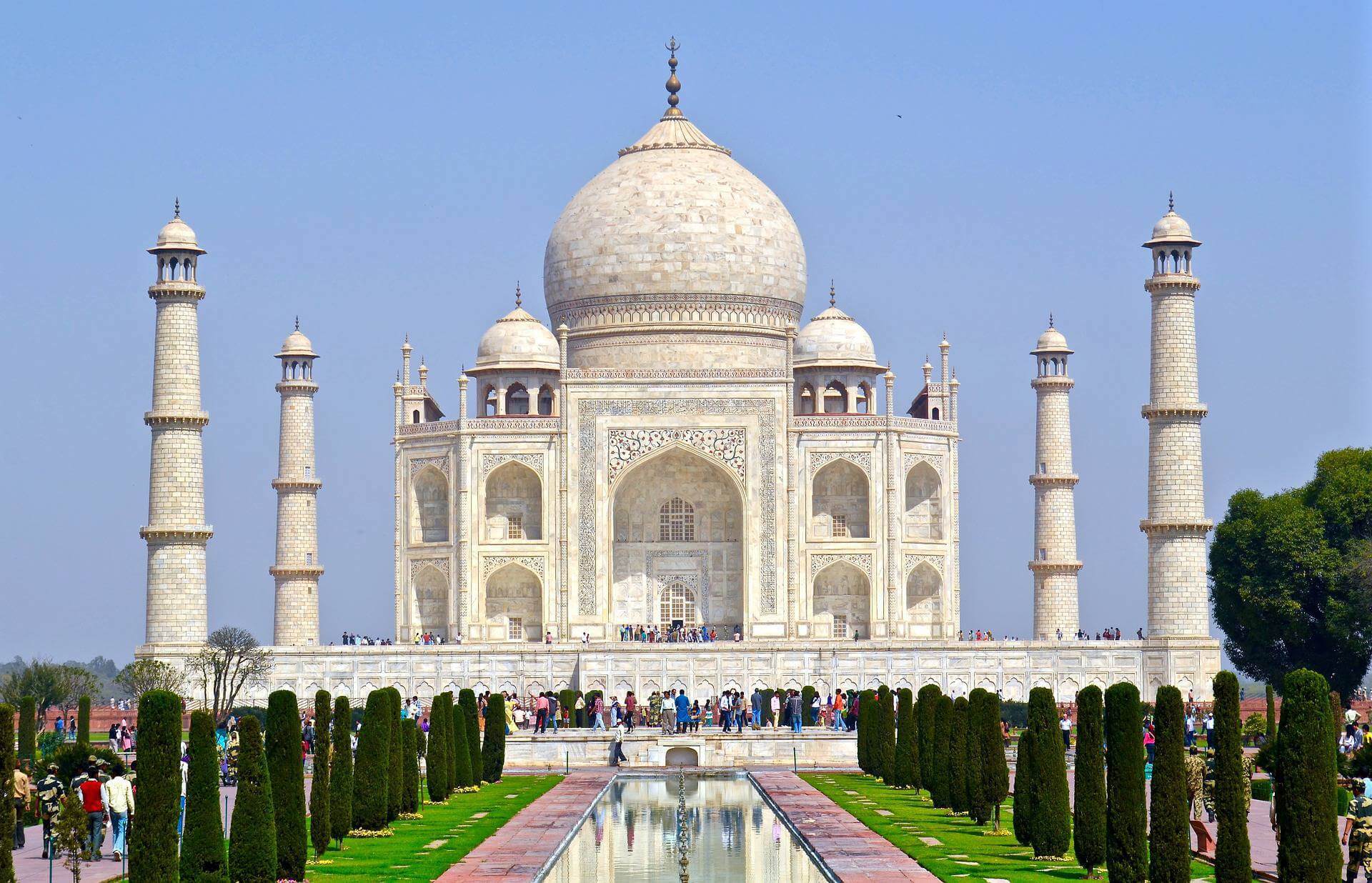 The construction of the Taj Mahal was ordered by the Mughal Emperor Shah Jahan in the year 1631. He wanted it built as a tribute to his late and most favourite, wife, Mumtaz Mahal who died while giving birth to their fourteenth child named Gauhara Begum. She was a Persian princess before marrying Shah Jahan.

The construction started in the year 1632 and the first part of the whole setting, the mausoleum, was finished in the year 1643. The garden and the surrounding buildings were finished after another five years. The imperial court which documented Shah Jahan’s grief after the death of Mumtaz Mahal illustrates that the love story of the Mughal Emperor and the Person princess was the inspiration behind the construction one of the most visited historic monuments in India.

The beauty of the Taj Mahal is magnified by the beautiful and traditional features of the Mughal and Persian architecture. 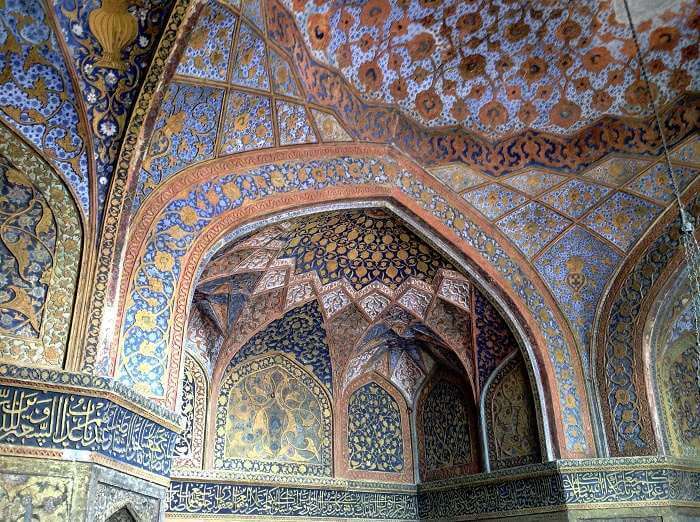 The outward decorations of the Taj Mahal can be described as one of the finest examples of the Mughal architecture. Along with the change in the surface area, the construction is also is also refined equivalently. Paint, stone inlays, carvings and stucco were used to create the decorative elements. There was an Islamic prohibition against the use of the anthropomorphic forms, thus the ornamental elements can be gathered into inscriptions, intellectual forms or vegetative motifs. Throughout the compound are passageways from the Quran that include some of the ornamental elements.

The inscription on the Great Gate recites "O Soul, thou art at rest. Return to the Lord at peace with Him, and He at peace with you. The script was produced in the year 1609 by a calligrapher named Abdul Haq. Shah Jahan deliberated the designation of "Amanat Khan" upon him as a payment for his stunning technique.Much of the lettering is composed of ornate thuluth script completed of jasper or black marbledecorated in white marble panels. Higher panels are transcribed in somewhat larger script to decrease the skewing result when watched from below. The calligraphy created on the marble memorials in the catacomb is predominantly meticulous and subtle.

Intellectual procedures are used throughout, particularly in the plinth, gateway, turrets, jawab, mosque, and, to a lesser degree, on the exteriors of the grave. The domes and arches of the sandstone constructions are functioned with decoration of chiselled painting to make intricate geometric forms. Her ringbone tiles describe the space concerning many of the contiguous elements. White tiles are used in sandstone structures, and dark or black pieces on the white marbles. Mortared parts of the marble buildings have been discoloured or tinted in a conflicting colour which makes a complex display of geometric forms. Floors and paths use complementary tiles or blocks in tessellation decorations. 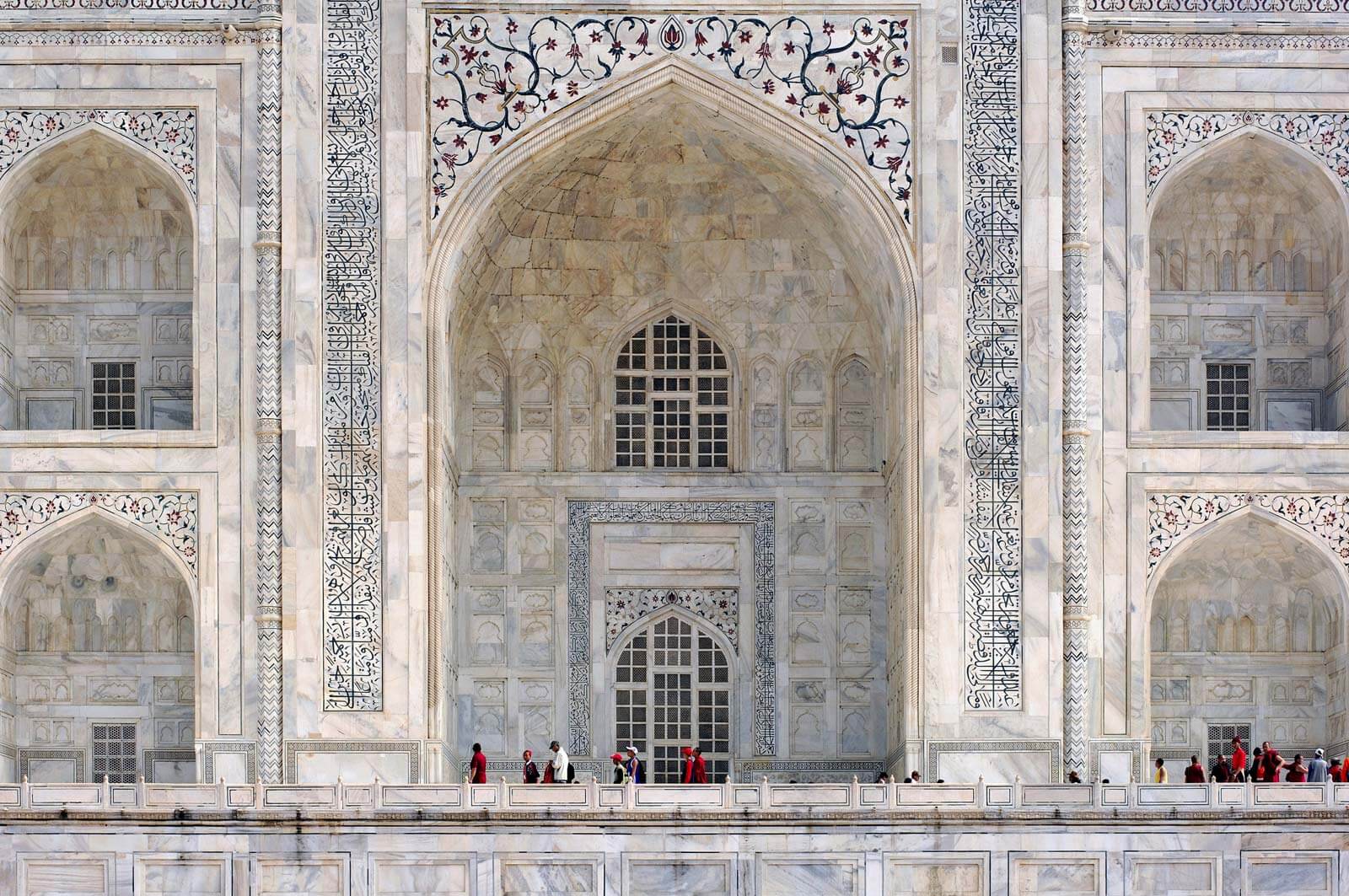 There are white marble dados carved with accurate bas relief portrayals of flowers and vines on the lower level walls of the tomb. The marble has been refined to highlight the attractive specifying of the artefacts. The dado structures and arch spandrels have been ornamented with pietra dura tiles of extremely schematized, nearly geometric vines, flowers and fruits. The inlay stones are of jasper and jade, yellow marble, refined and flattened to the surface of the walls.

The interior compartment of the Taj Mahal spreads far beyond traditional enhancing basics. The inner hall is an octagon with the scheme permitting for entrance from every face, though only the entrance fronting the garden to the south is in use. The inner walls are around 25 metres (82ft) tall and are surpassed by a "false" inner dome ornamented with a sun theme. Eight pishtaq curves describe the area at ground level as it does with the external; each inferior pishtaq is capped by an additional pishtaq about middle up the wall.

The four dominant higher arches form galleries or viewing areas, and each gallery' sexternal window has acomplicated screen. Furthermore to the light from the balcony, light comes in through roof overturesenclosed by chattris at the corners. The jali bordering the cenotaphs or the octagonal marble screen is made out of eight marble boards carved finished with sophisticated pierce work.

The residual surfaces are decorated in subtle detail with semi-precious stones creating twining vines, flowers and fruits. Each compartment wall is extremely ornamented with complicated lapidary stone and sophisticated calligraphy panels dado bas-relief, which reflect, the intention rudiments seen through the peripheral of the complex. 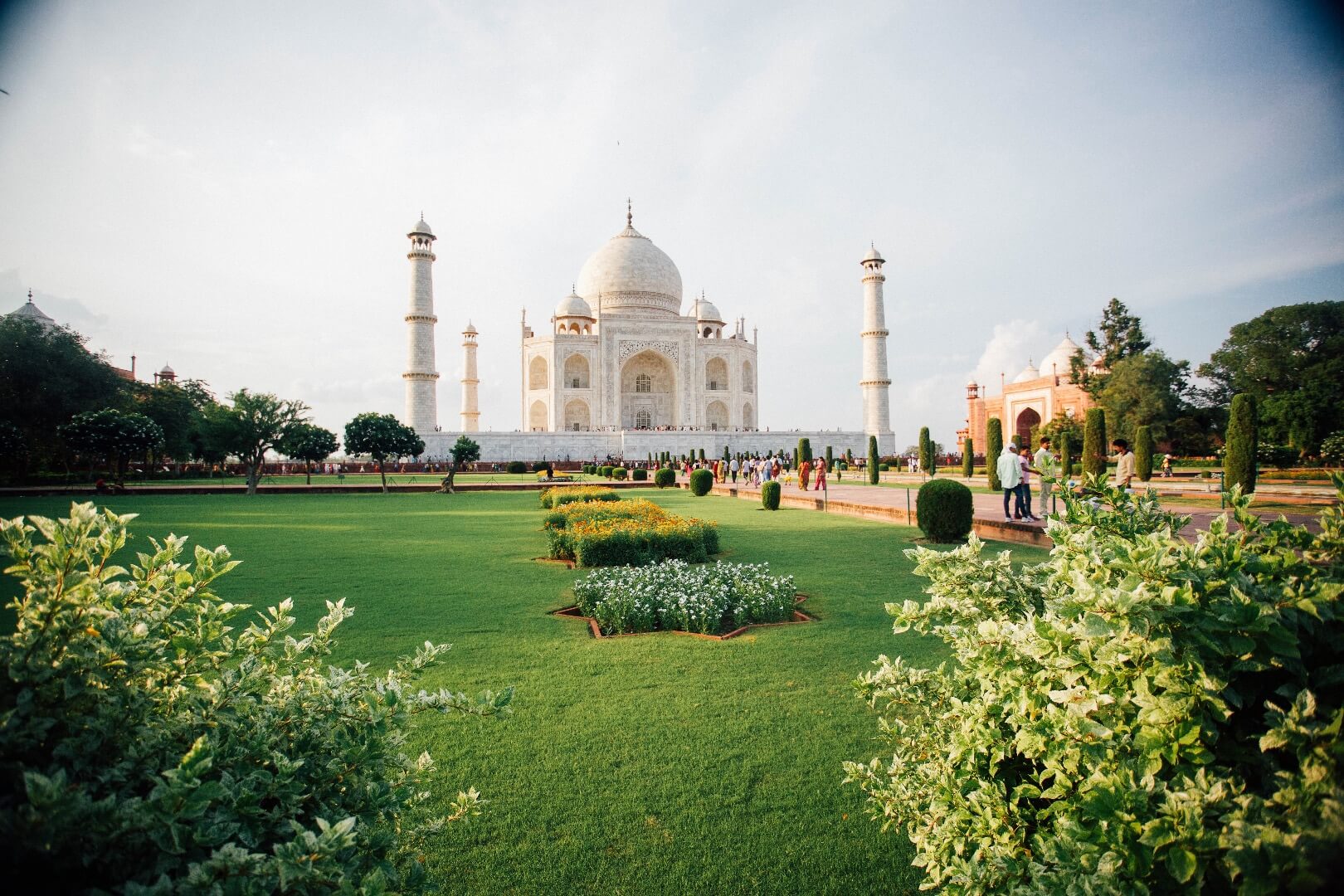 The complex of the Taj Mahal is set about a large 300-metre (980 ft) four-sided charbagh or Mughal Garden. The garden uses elevated trails that distribute each of the four-quarters of the lawn into 16 sunken parterres or plots. There is a raised marble water tank with a sparkly pool located on a north-south axis to replicate the appearance of the tomb midway between the tomb and entry in the middle of the garden.

The garden is placed out with streets of plants labelled conferring to communal and scientific designations and fountains. The charbagh garden, a schemeenthused by Persian gardens, was presented to India by Babur, the very first Mughal emperor. It represents the four graceful rivers of Jannah (Paradise) and reproduces the Heaven garden resulting from the Persian paridaeza, signifying 'walled garden'.

In mystical Islamic manuscripts of the Mughal era, Paradise is labelled as aperfect garden of profusion with four rivers graceful flow out from a dominant spring or mountain, unravelling the garden into north, west, south and east. 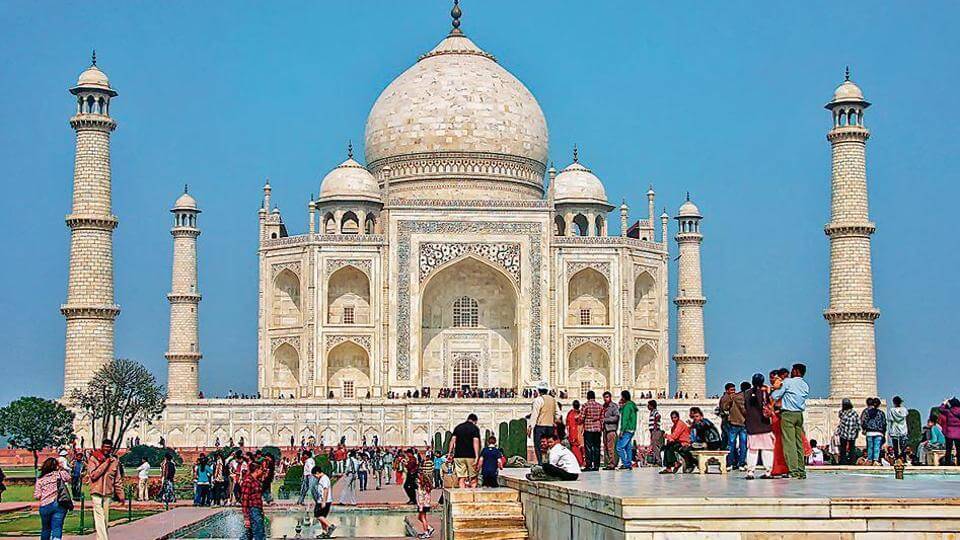 It was in the year 1983 that the Taj Mahal in India was designated as a UNESCO World Heritage Site. It was marked so because of it admittedly being one of the globally admired masterwork of the world’s heritage. It is the jewel of the Muslim art in India. Many scholar, historians and architects regard the Taj Mahal as the best example of the rich history of India and also as the best example of the Mughal architecture in the country. The monument attracts on an average 7 to 8 million people throughout the single year. The Taj Mahal was declared as a winner of the New Seven Wonders of the World, the 2000-2007 initiative.

Note:- Additional INR 200 is charged to see the main mausoleum

The compound is opened for a time period of thirteen hours, from 6:00 in the morning till 7:00 in the evening in the weekdays except for the Fridays. On the Fridays, the complex is opened only for 2 hours, from 12 PM to 2 PM in the afternoons for prayers at the mosque. The compound is also opened for night viewing during the full moon, on that day and two days before and after. This program excludes the month of Ramadan and the Fridays.

Most of the tourists prefer to visit the TajMahal during the months of October, November and February; since during this time, the temperature is cooler and comfortable for a day out in the compound. A polluting traffic is prohibited closer to the complex and the tourists either need to walk from the parking areas or catch an electric bus.

The preferred tourists season is during October, November and February because of the comfortable weather of this period. The summers can be very hot as Agra lies in the plains and has quite a high temperature; the heat brings warm to the marbles which increases the beauty. During the winters, the warm sunrays over you and the cold marbles make a contrast that makes the place more enjoyable and there is nothing more beautiful than watching the ‘icon of love’ under the rain adding to the feeling of romance. The marbled mausoleum from the Mughal era is a visual beauty especially during the sunrise, sunset, and under the light of the full moon.

How to Reach Taj Mahal

The city of Agra, where the Taj Mahal is located, is very well connected to every major Indian city. The Airport in Agra is military base that also works as a public airport. There are flights connecting Agra to Delhi, it is recommended to book the tickets a few weeks prior to get good price rates. The popular airlines flying this route are SpiceJet, IndiGo and Air India. It takes the planes about three hours to travel from Agra to Delhi and this was without stopping anywhere else. From the Agra Airport, the Taj Mahal is at an approximate distance of 13 kilometres and it takes a mere 40 minutes drive to reach the magnificent monument.

The Agra Metro is still under construction and is scheduled to be finished by the year 2020. After the metro is finished, the Taj Mahal will easily be connected with all the other tourist attractions in Agra.

The Idgah bus stop is the biggest and most prominent bus terminal in the city. It is also very close to the Idgah Railway Station and Cantt that is the main railway station in Agra. The Taj Mahal is at a distance of approximately 6 kilometres from the Idgah bus stop.

Agra Cantt is the most important railway station in Agra. It is very well well-connected by taxis and other resident modes of transportation like state buses. To get to Agra Cantt from India’s capital, you have to take the Gatimaan Express, the country’s fastest train, departing from Hazrat Nizamuddin station at 08:10 AM and arriving into Agra Cantt within 100 minutes by doing an average speed of 112 km/hr.

Read more information about How to Reach Taj Mahal