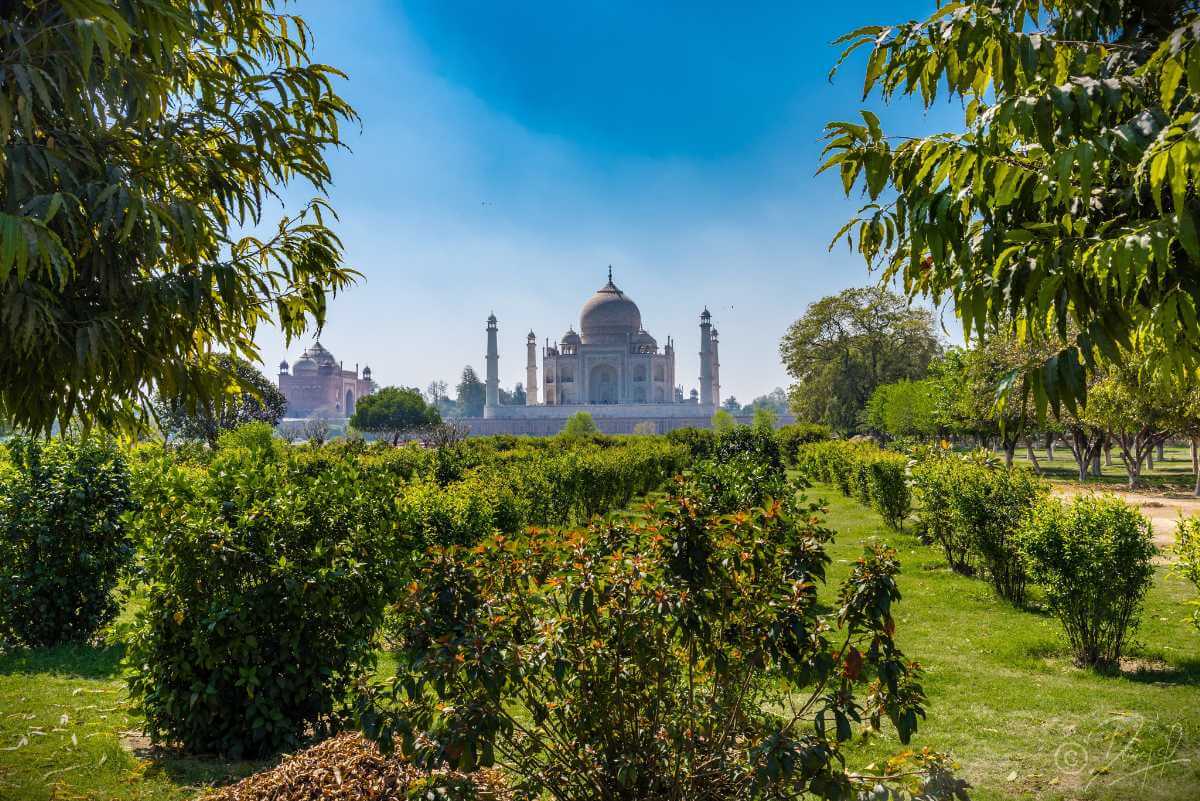 Mehtab Bagh is a small garden, which lies close to Taj Mahal. This garden is very famous for spotting Taj Mahal from a distance. The garden is square shaped and perfectly aligned with the wonder, which is found on the other side of the river.

The worst time to visit the park is rainy season. The place will be flooded during heavy rains. The best time to visit is winter and early summer. During peak summer, the temperature will be high that can dehydrate you. The winter starts by October and ends by February.

The park is open from 10 in the morning to 5 in the evening.

Where is Mehtab Bagh is located ?

Why Mehtab Bagh is so famous ?

A compound wall measuring 289m in height surrounds the entire park. You can find towers with domes made of sandstones in each corner. A large pathway made of brick runs through the park. Near the entrance, you can find a small shrine. A large pond inside the park reflects the image of Taj Mahal. You can find the foundation of the Black Taj Mahal near the pond.

On the northern side of the pond, you can find a step fountain now not in use. It is assumed that the fountain would have been used to feed the pond with water. Top plants to spot inside the park are Neem, Citrus fruits, Hibiscus, Jamun, Ashoka, Guava and others. You can find a lot of bright colored flower in the park.

One can bring eatables inside the park and enjoy a picnic.

History about the Mehtab Bagh

This is the last garden that was built by Mughals. The site was picked by Shah Jahan for viewing Taj Mahal and created a moon shaped garden filled with pools and fountains. Later, the garden was designed in square. Shah Jahan had a plan to build a black Taj Mahal which will look similar to Taj Mahal but in black color as his resting place. As he was captured by his son and prisoned in Agra Fort, the twin Taj Mahal was not built. You can find the foundation of the black Taj Mahal, which now is found as a pond. There are theories that the foundation is just a part of the garden structure and Black Taj is just a myth.

After the Mughal reign, Kings of Amber owned the place along with Taj Mahal. They never gave importance to the spot and the place was at ruins and forgotten. In early 1990s, the park, which was degraded with sand, alluvial silt, wild vegetation and waste, was cleared and made as a tourist spot.

Right outside the gate, you can find many shops selling Taj Mahal miniature structures, bangles and other souvenir items. You can find camel ride providers who will take you on a camel ride up and down the road for a fee. The fee changes from season to season and from one service provider to another.