The Tomb of the mighty Mughal Emperor Akbar is situated in the outskirts of Agra. The emperor got his tomb monument constructed while he was alive as his final resting place. His son Jehangir finished the complete construction which is totally done with sandstone and white marble. The monument that is found in Sikandra within the suburbs of Agra is built over a region of 119 acres surrounded by lovely gardens designed by the Emperor Akbar. Overseeing the tomb of himself while living is part of the Tartary tradition which Akbar followed for his own tomb. The tomb is toward the rising sun and roughly a kilometer close to his wife’s tomb also in Sikandra. 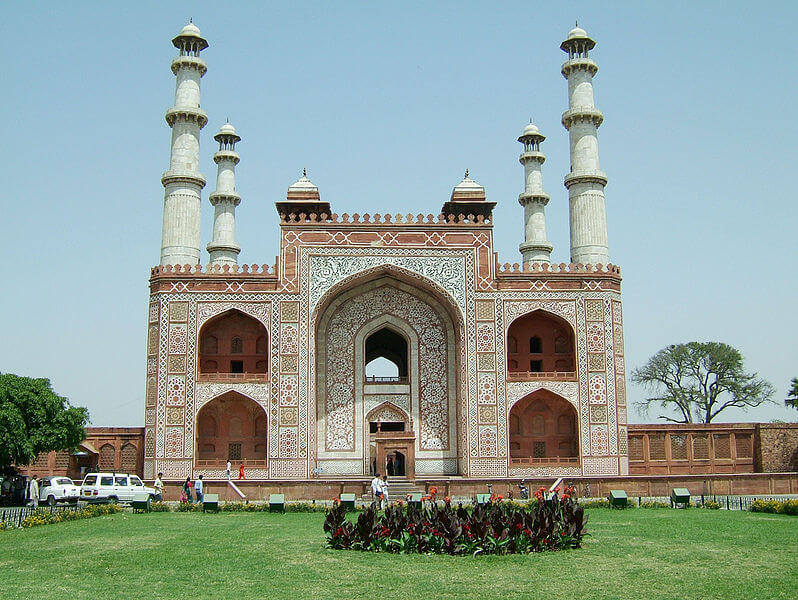 Emperor Akbar while he was alive selected the place for his final resting place, the design of the gardens around the tomb and took care of the construction of his own tomb. While the entire tomb was constructed and Akbar lived through it, his son, Emperor Jehangir famously known as Prince Salim constructed a floor of marble stone over the structure. Thus, he completed the structure of his Emperor father’s tomb.

Aurangazeb was known as a tough and strict or ruthless leader who offended the feelings of many Hindus. Many temples were destroyed during his reign and this led to a massive revolt by the Jats. To take revenge for the death of his father, the Raja Ram Jat ordered the revolt and attacks against this king. So, they attacked the massive Agra Fort and took away huge amounts of ornaments, jewelery, precious stones and precious metals, diamonds, carpets, etc. They also burnt and even cremated the bones of Emperor Akbar that was totally unacceptable.

The tomb of Akbar is done in typical style and symmetry of various monuments during the Mughal era. This monument is the perfect symbol of Mughal architecture. However, there are also features of Rajputana and Gothic style of architecture. It has four minarets similar to the Taj Mahal’s minarets, at the largest gate. The southern gate is the largest of the four gates of this tomb and is the general gate for entry. There are total of four storeys and it is enclosed within a large wall around the tomb. 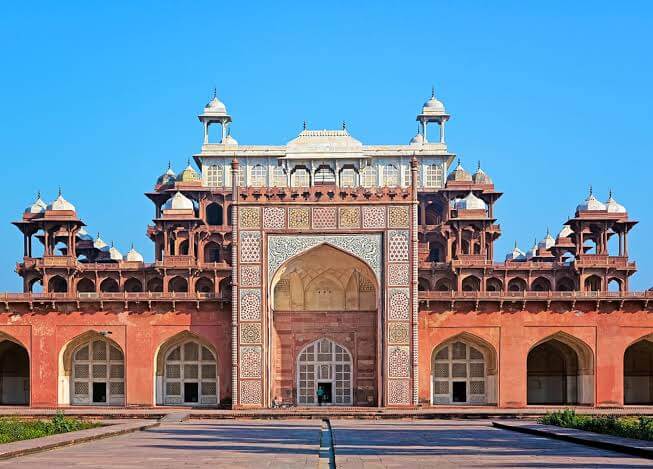 The marble pavilion hosts the fake tomb and the real tomb is situated inside the basement of the monument. It is surrounded by walkways on all sides but there is no walkway on the center of southern gate main entrance. There are arcades and arches along side the walkways that make them into bays. The following three storeys are square in shape with kiosks on their side. The second storey has marble roof and gets into the shape of a pyramid. The final top part are Chhatri – shaped crown cupolas.

The main construction material used for the building structure is deep red sandstone mixed with marble. The inlay panels are done with black slate at the main gatehouse and across the monument. There are designs, calligraphy, floral patterns, and geometrical designs found on the panel inlays. The top most floor is a pavilion made completely from white marble stone and is like a square court. The central courtyard is covered by lovely arches. The central courtyard is a square platform in marble where the false tomb with floral designs carvings.

It has the Charbagh system of garden with water canal dividing it by four sections. The tomb of Akbar monument also has the remains of his daughters laid here.

1. Foreign tourists with Agra development authority toll ticket of INR 500 for Taj Mahal do not require to purchase other toll ticket while visiting the tomb of Akbar if it is on the same day.

2. This place is on the outskirts of Agra called Sikandra and there are so many monkeys. Visitors must take care of their personal belongings.

3. Watch out for various species such as Deer, Antelope, rarely peacocks, and several birds here.

4. The tomb of Akbar is en-route Fatehpuri Sikri which is one of the top tourist destinations around Agra. So you can also plan to visit agra same day trip.

5. The tomb of Emperor Akbar is open for visitors from sunrise to sunset and is closed on all Fridays.

The tomb is open from 6 in the morning to 6:30 in the evening. The monument is at its prime beauty throughout the year. However, people choose winter, as it will be pleasing with mild climate. If you are visiting during rainy season, you will not be able to spot any animals inside the complex.

Where Akbar's Tomb is located ?

Why Akbar's Tomb is so famous ?

Once you enter into the gateway, you will find Mughal styled gardens. In the garden, you can find antelope and monkeys. You can rarely spot peacocks here. There is a water canal on both the sides of the garden. It is rare to find water in the canal, these days. The tomb has four gates and the south gate is the largest one with minarets on top like the ones in Taj Mahal. A wall covers the tomb. The building is a four-leveled pyramid with marble pavilion. The false tomb is found in the ground floor while the real tomb is located in the basement. The basement is not open for tourists. It is said to contain precious and expensive jewels, weapons and other before the attack of Jats.

The tomb also has the remains of two of Akbar’s daughters. Unlike any other Mughal tombs, the tomb is faced towards the east rather than towards Mecca.