Agra is a beautiful city that takes you back to before the 15th century AD. The historical monuments made from precious material like marble and red sandstone and artificial lakes gives you a memory that lasts a lifetime. There is a mini city inside enormous gates filled with a glass palace, glazed tiled monument, and so on. This well connected city gets several tourists from all over the world every year. You can visit during anytime of the year if you do not have climate concerns. However, there are colorful fairs & festivals celebrated in full gusto. Make sure to visit in time to participate in these major festivals of Agra. 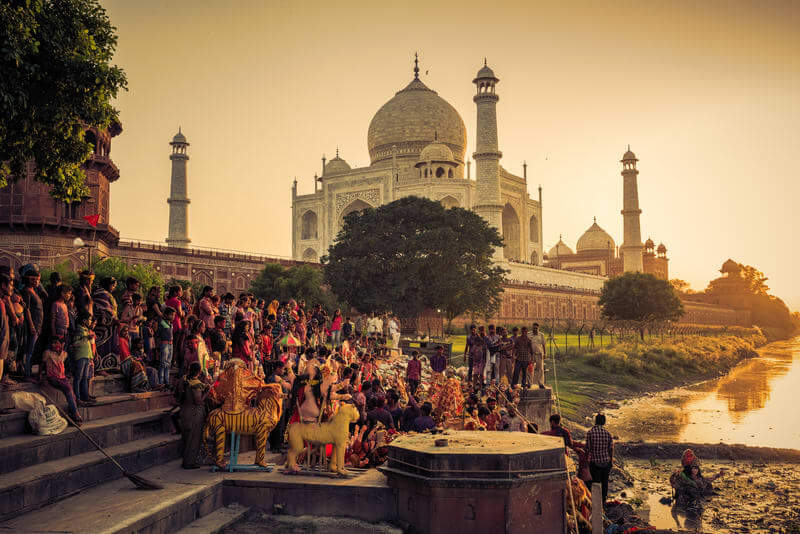 The festivals of India are known for the different customs, festivities, and types of celebrations. Due to the number of festivals, there are also so many national holidays that many working people enjoy. India is known as a land of different cultures. So ti is not a new thing that a person who belongs to one region does not know about the customs, regional festivals, significance, and the way the same festival is celebrated in another region. Tourists will know more about the various festivals of India.

Literally meaning ‘Great Celebration of Taj’ this is one of the first festivals in the year. It is celebrated each year with various activities for people of all ages to enjoy. For example kids can enjoy elephant & camel rides while elderly can listen to Ghazals. Adults can enjoy poetry recitations called ‘Mushairas’. Colorful folk artistes perform Nautanki, Sapera, and Lavani with drums & traditional music. Make sure to shop for blue pottery, food, arts & craft during the 10 days long festival. The UP Tourism organizes the fair at Shilpgram, a crafts village close to Taj in February.

Shortly before Dusshera there is a fancy marriage procession that marks the end of Ravana. A major fair is held every year and stages the life of Ram in Ram - Lila. The procession of the dressed up deities wedding is visited by thousands. It covers all major lanes of various towns to reach Janakpuri from Lala Channomalji Ki Baradari. Teenage boys play the role of the female deities. A silver chariot carrying Rama with his brothers on either side starts at Raja Janak, a royal palace. The bejeweled crowns, decorated silver chariot and fancy costumes make the fair more colorful and interesting.

This festival is held during the monsoon season during months of August or September. This is an annual festival that repeats every year. People celebrate the festival to remember Shiva who appeared in the form of a stone called lingam. Devotees and worshippers of Shiva are called Shivites or Lingites. By visiting from nearby towns and surrounding areas to commemorate the festival. The world famous Kailash Fair is held 12 kilometers away from the city of Agra at a venue called Kailash Temple.

This is month long festival held each year during October and / or November to commemorate Lord Shiva. The fair takes the name of the presiding deity called Bateshwar Mahadeo. Hence Bateshwar Fair is held in a town situated 70 kilometers from Agra with 108 Hindu temples of various gods and goddesses. This is a world famous spiritual festival where massive numbers of devotees take a holy dip in the sacred River Yamuna waters. There is also a Cattle fair and live stock fair while the festivities are also witnessed throughout city of Agra.

Do you wish to take part in lifestyle adventure tourism extravagance. This is your chance to get a bird’s eye view of the magnificent marble wonder of love – the Taj Mahal. Decorated hot air balloons coming from various parts of the world take part to provide an amazing ride through the breeze over Taj Mahal. It helps to differentiate the New Agra from Old City of Agra and also see other historical monuments of Agra like Agra Fort, River Yamuna etc.

See the reflection of the Taj Mahal in the waters. There is also the Night Glow concert apart from the Sky View balloon rides. With music, lights and colors in the sky it definitely grabs the attention of spectators, audiences and participants. The Taj Balloon Fest is celebrated for 5 days in the month of November. There are 2-day packages starting November 13, 2019 – November 17, 2019. Tickets are limited as the hot air balloons are numbered.

This literary festival honors the power of written word, forms of art, literary bigwigs, and legends such as Soordas, Ghalib, Tansen, etc. The festival is held at a scenic location set against the backdrop of the Taj Mahal. It pays tribute humanity that lived on for centuries through various forms of art and literature. This includes literary art, performing art, plastic art and dynamic too.

This is a great way for tourists from around the world to catch up with their literary heroes. This festival is more than a fiesta of ancient author's works, musical compositions, stage drama performances but also is a platform for bringing new and fresh aspirants into the literary world. There isn't a better place to hold this than the marble wonder – Taj Mahal. Be there to celebrate literary works from famous bibliophiles and authors from around the world.

People around India and even many tourists around the world are familiar with the festival of colors – Holi. However, this festival of colors and beatings is around 4 – 5 days earlier to other major Hindu festivals. Mathura is a place in Uttar Pradesh, a state of northern India which is better known as ‘the land of young Lord Krishna’. People wait for this time of the year to celebrate this festival especially in the towns of Barsana town and Nandagaon town of Madhura district.

This festival is where the gents sing songs to women and try to annoy them. The women in turn chase them away from the town Barsana with ‘sticks’ called lathis. This is as the mythological legend of Krishna and Radha and the Gopis. Krishna from Nandagaon went to smear color in enthusiasm on Radha’s face which angered the people around and the women there. So, they use the lathis to drive him from the town of Barsana. Men and women of these towns re-play this tale and this festival involves loud songs, bright colors, and strong lathis.

The festival of Lights – Diwali is one of the most awaited festivals for Hindus all over the world. People from all religions participate in the celebrations of visiting families who celebrate Diwali, exchanging sweets or burning fireworks. Each state has various customs and there are different Diwali Celebrations in India. The main significance for Diwali is the victory of Good over evil. This festival lasts for 5 days.

This is the festival that precedes the main festival of Diwali. It signifies that Lord Rama defeat over Ravana. People hold big community celebrations, plays, and shows. There are cut outs of Ravana who is then burnt down. Close to Agra, in Kullu, Himachal Pradesh, there is a massive festival that lasts nearly a week with crowds, chariots, songs and plays from the story. Then a part of wooden log is burned and thrown in River Beas after which the huge celebration is ended.

This festival means ‘breaking of the fast with festivities’ is celebrated with exuberance by Muslims all over the world. In India, there is so much preparation and celebration for this festival. It is called Eid popularly, or in short and people buy new clothes for family, visit mosque, and greet each other with love and gifts. At home, people prepare elaborate delicacies to eat. It is a big celebration where they break the fast with celebrations after a month’s time of fasting. Huge congregations gather at prominent Masjid in various cities and states of India.

Eid celebrations in India are one of the biggest festivals for the Muslims all over the country. There is also a lot of charity work people who are observing the Holy month of Raman do. They help to fulfill the desires of others, reduce the financial burden of the poorer families, exchange gifts or clothes, etc.