Agra is a famous tourist spot and is the home of one of 7 wonders of the World, Taj Mahal. Tourists from all over the world will frequently visit this place. Being located in the bank of Yamuna River, Agra is a part of Golden triangle along with Jaipur and Delhi. Almost millions of travellers visit this beautiful city. Agra is the only city after Delhi which had more than 10 five-star hotels. Yamuna river in Agra is to be considered as Blue River. It is the best city which offers great food and shopping experience. 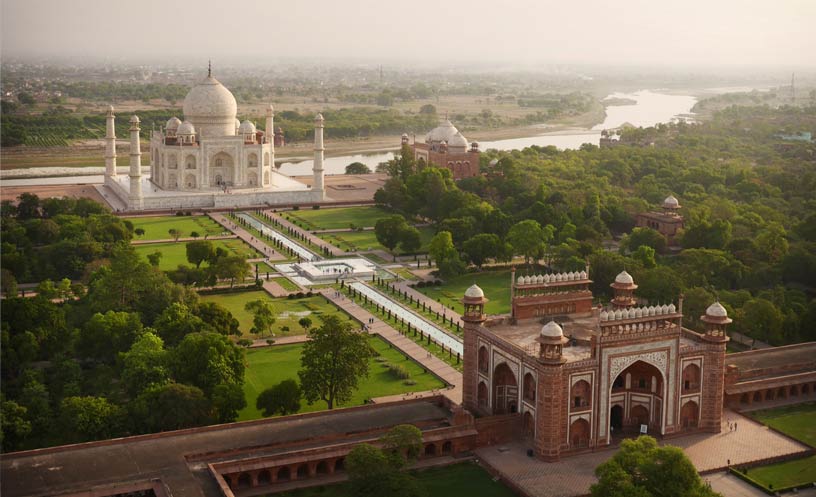 Taj Mahal, one of the 7 wonders of the world is located in Agra. Agra city is full of sweet and priceless architectural and historical monuments of the Mughal dignity array'. In the kingdom of Akbar, Agra city achieved its glory and prestige. This city is famous for many historical monuments like Fatehpur Sikri, Red Fort, Mughal Gardens, Buland Darwaza, Taj Mahal and many more. This city was founded in 1504. People all over the world are attracted because it is a Symbol of Love.

It was believed that it is formally founded by Mughal Emperor. There was a lot of stories in Mahabharata. The history of Agra is known to be dated back as 1000 BC. Specific dates of Agra origin is not mentioned in this epic.

Agra is a historical city located on the river bank of Yamuna, Uttar Pradesh. It was founded by Sikandar Lodhi. It had over a population of 1.7 million. This is the popular tourist destination in India which attracts tourists from all over the world. It had semi-arid climate and follows different seasons like autumn, monsoon, summer and winter. This place was well-known for the Mughal era. Agra is the well known glorious city from the time of Mahabharata. Most of the Mughal generations maintained Agra as their capital. Agra achieved glory and prestige during the rule of Emperor Akbar. Agra city is full of lovely and priceless architectural and historical monuments all dignity Mughal. Agra is famous for its markets and candy for "Petha".

How Agra Become an Incredible city?

King of Delhi sultanate, Sultan Sikander Lodhi built Agra in 1504. It is famous all over the world due to its Mughal era. In 1526 during the ‘The first battle of Panipat’, Babur defeated Sikander Lodhi. After Babur, his grandson Akbar ruled Agra and his region is called as a golden age because he built numerous monuments that depict the Mughal Architecture. The first garden named ‘Aram Bagh’ was built on the river Yamuna by Babur. The first stone for Red Fort was laid by Akbar. During the time of Akbar, Agra is called as ‘Akbarabad’.

In the outskirts of Agra, a new city named Fatehpur Sikri was developed by Akbar. It is a palate of Mughal monuments. The most adorable Mughal monument, Taj Mahal was built by Shah Jahan and is one of the seven wonders of the world. The capital of Mughals was later shifted to Delhi by Shah Jahan. The son of Shah Jahan, Aurangzeb again shifted the capital to Akbarabad. With the defeat of Mughals by Marathas, declination of Mughal dynasty started. The UNESCO World Heritage Sites Agra Fort, Taj Mahal and Fatehpur Sikri is located in Agra. Agra is now developed as a centre for industries and due to the air pollution and chemicals, Taj Mahal had started to deprive its beauty.

Most Popular Places in Agra

There are many popular historical and incredible monuments which are famous among tourists in Agra.

Jama Masjid is the holy mosque built by Shah Jahan and is famous all over the world. It was built for the daughter of Shah Jahan, Jahannara. It is designed beautifully with white marble, red sandstone and 3 large domes. This will face the red fort. It nearly took 6 years and almost 5000 workers to complete this construction.

Akbar’s tomb was built in 1600 by Akbar and covers a total area of 120 acres. It is situated near to Mariam-uj-jamani tomb who is the wife of Akbar. The tomb is beautifully designed with white marbles and red sandstones. Many tourists will be attracted due to their loyalty.

Fatehpur Sikri was built by Akbar in 1569. It is located in the outskirts of Agra and is a masterpiece of precious stone works and jewels. Akbar took a keen interest in the establishment of this city. The capital from Agra was shifted to Fatehpur Sikri by Akbar from 1571 to 1585. This city had many mosque, gardens, harems, courts and private quarters. "Fateh" means "Victory" through his navaratnas and courtiers.

In 1565, Akbar built the great Mughal architecture Agra Fort. It is believed that is even built about 1000 years ago and under the Akbar region, it was renovated. This fort contains Sheesh Mahal, Khas Mahal, Diwan-i-Aam, Diwan-i-Khas and Pearl Mosque. Agra Fort is one of the UNESCO World Heritage Sites. This fort is well known for its red sandstone architecture and had a total perimeter of 2.5 km. The son of Akbar, Jahangir converted this fort into the palace.

Your tour will not be completed without visiting Taj Mahal. It is the most beautiful monument and is considered as the world’s wonder. It is a symbol of love and many tourists are attracted by this world’s heritage site. Almost 20000 jewellers along with workers build this for 22 years. Taj Mahal is designed with the architectural styles of Indian, Turkish, Islamic and Persia. In the central base of the dome, there coffins Mumtaz Mahal and Shah Jahan. This is a masterpiece that is admired around the world.

Moti Masjid was built by Shah Jahan and is called pearl white for its glory and dignity. This was built for the worship of courtiers. Moti Masjid beauty is because of the well-decorated prayer chamber with luxury white marbles and jewels.

Where to Stay in Agra?

Agra is the place well known for many motels and hotels to stay in. With the help of websites, you can easily book the hotels, motels and inns. You can book 5-star deluxe hotels at a reasonable price. Tourists are welcomed into the hotels with great music shows, dance. Depending on the themes dinners will be arranged, to represent the tradition of India mock marriages will be held, camel rides and fireworks will be organised by the hotels.

Where to Eat in Agra?

Various restaurants and hotels are available in Agra which offers a wide variety of cuisines and speciality of different places. Hotels organize themed dinners for tourists serving over centuries and loved by generations so far. Agra is famous in India for its sweet dish 'Petha'.

Places of Shopping in Agra

Agra is well known for handicrafts and architecture. It is well known for the marble work with sandstone and crafts. Different types of carpets, brassware and leatherwear will be available here. It is also famous for embroidery cloth wors and precious jewels. Tourists are most attracted by the zari sarees of Agra.

Festivals and Fairs in Agra

How to Reach Agra

Agra can be easily accessible by the airport, Agra Airport is located at a distance of 8 km from the centre of the city. Many major cities like Jaipur, Gujarat, Kanpur, Delhi, Chennai, Mumbai are well connected with Agra. Many trains such as Taj Express, Rajdhani Express, Shatabdi express are comfortable to reach Agra. It can be accessed easily by road. A trip to Agra makes you feel proud of the tradition and culture of India. It makes you the superb necessitate Indian heritage who is the delegation for us to our historians. It is a sign of prestige and royalty.

Read more inforamtion about How to Reach Agra