Land of Varanasi is famous for its long list of festivals. Many pilgrims visit the place to enjoy various festivals of the land. 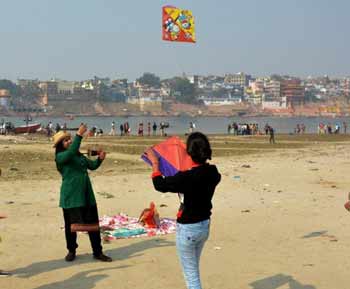 This festival is celebrated throughout the country with different names as Pongal, Lohri and others. This is a festival of kites. People fly kites and the sky will be filled with colorful flying paper. This is the best time for photography here. Top delicacies to enjoy during this festival are badampatti, tilkut, dahichuda, khichadi and others.

This is an important festival for those who worship Lord Shiva. According to mythology, Lord Shiva drank the most deadly poison to save the world. There are many other stories for the origin of this festival. People fast and stay awake throughout the night. Many rituals and delicacies are famous during this festival. According to literature, this festival has been a part of Hindu religion even before 5 AD.

Saavan or Sravana is a Hindu month that starts in the middle of July and end by middle of August. This is called as Avani in Tamil. This festival is linked with welcoming rainfall. People fast on every Monday / Tuesday and worship Lord Parvati (Tuesday) or Lord Shiva (Monday). People offer milk to Lord Shiva, wear rudraksha, chant and fast during this festival.
Activities : rituals, bathing in the river and fair

On the 15th day after Diwali, people celebrate this festival by lighting hundreds of small earthen oil lamps around their house. The Ghats in the river will be decorated with the lamps and people float the lamps on the river. A good festival for photography. Firecrackers are burnt throughout the night, procession of deities from numerous temples can be seen on the road and many other activities are common during this festival.
Activities : Rangoli decorations, oil lamp lighting, firecrackers, rituals and processions

This is an important festival in Kashi Vishwanath Temple. This marks the beginning of Holi celebration in India. Rangbhari or Amalakii is the child of Lord Brahma who can wash all the sins. Lord Ram worshiped Amalakii to wash off his sins after the epic war.
Activities : rituals

Diwali marks Lord Ram’s win over Ravan. People celebrate this festival with fireworks. It would be heavenly to watch the sky at night. Many rituals can be seen in the temple and near the ghats. The houses will be lit with oil lamps.
Activities : rituals and bursting crackers

Ram Leela marks the battle between Ram and Ravan that took place for ten days. On the tenth day, it is celebrated as Dusshera. For the ten days, many carnivals, shows, stage performance, puppet shows and other attractions will take place. Special rituals will be conducted in the temples.
Activities – fair, carnivals, shows, dance performances and others. 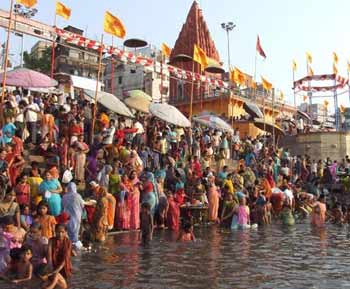