India is a mystical land. It has a lot of places to explore and it can be called as a traveller’s delight. One of the amazing part about this country is that you can travel from one town to another and find people with different cultural beliefs. There are various rituals in India and one of the strong and intense rituals is that of the Ganga Aarti.

Every evening Ganga Aarti is carried out in three holy cities of India. They are Haridwar, Rishikesh and Varanasi. All three of them have different vibes and energies. It is said that you should be a part of all the three aartis once in a lifetime.

Overview of the Ganga Aarti 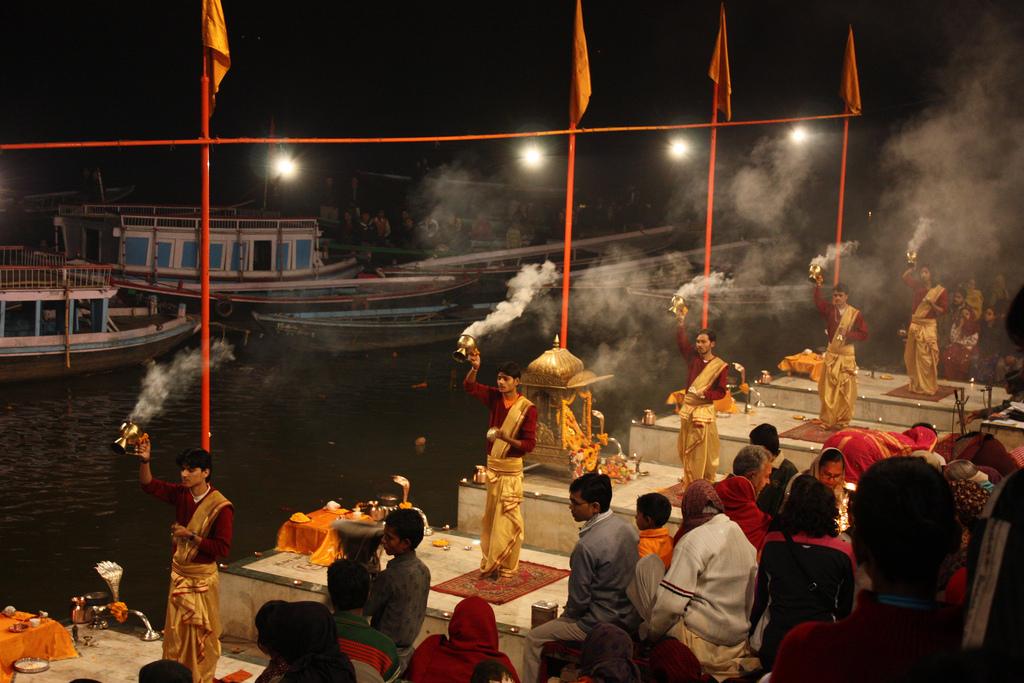 The aarti is always carried out facing the River Ganga. A lot of lamps are lit during the aarti. They are usually circled out by priests. It is always done clockwise. The aarti is always accompanied by different songs sung while praising the Ganga. It is believed that the lamps acquire the power of the deity.

After the aarti, devotees are supposed to cup their hands on the lamps over the flames and touch their foreheads. This is done in order to receive gratification and purification from the Goddess Ganga.

A group of young saints dressed up with silky saffron and white robes conduct this ceremony. Each pandit or saint takes up a specific spot in the Ghat and start the ritual by offering flowers to the river. The ritual includes many oil lamps like snake hood lamp which are waved in a synced motion.

"Thousands of devotees gather to watch this Aarti and by the end of the Ganga aarti ceremony, you can find thousands of small oil lamps floating on the river that would look like numerous stars on the water".

How to Attend the Varanasi Ganga Aarti? 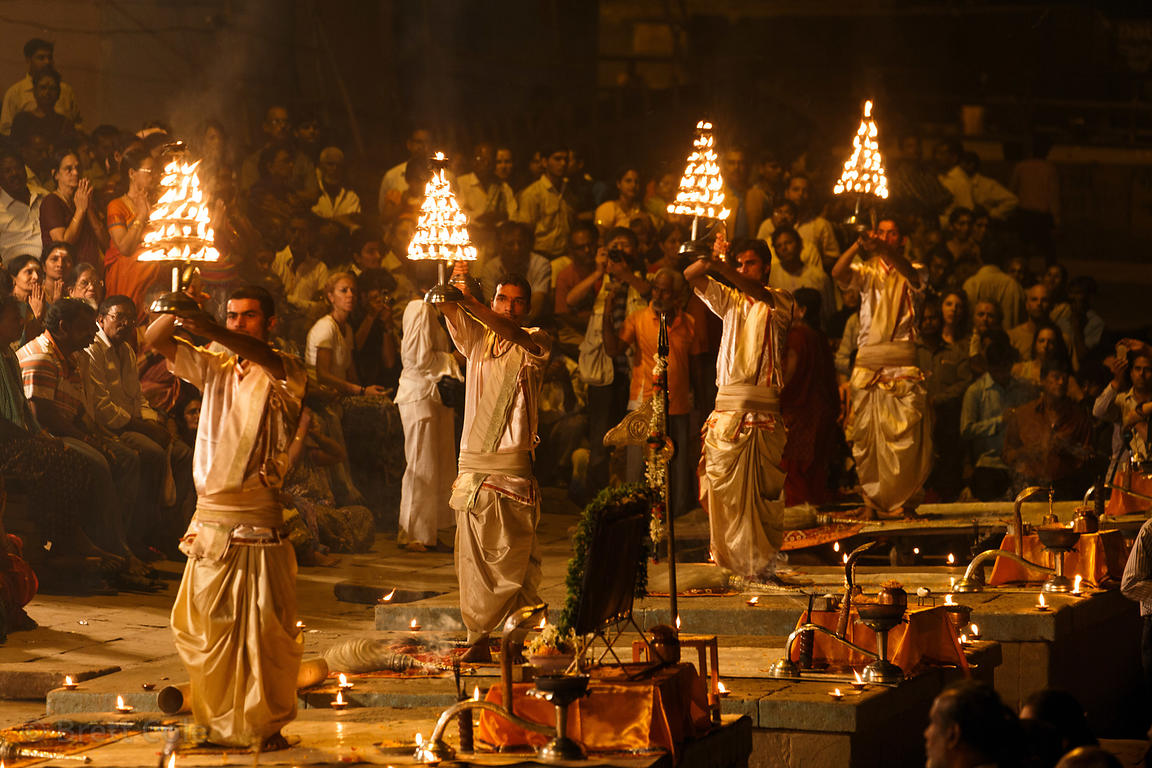 You obviously need to be in Varanasi for starters. However, people arrive really early so that they get a good place to witness the aarti. Every day thousands of tourists visit the place. Even locals attend the aarti regularly.

Hence, it is a good idea to reach the ghats by 5 pm. You can secure a spot in the front. Since there is a lot of crowd, you might not be able to see things from the back.

A good way of witnessing the whole ritual is by being in a boat. However, you need to book a boat ride in advance. Apart from that, a lot of shops and house owner rent their balconies to tourists for viewing the aarti. You can ask the locals for that as well. In that way, you can peacefully see the whole aarti.

Also, there will be lesser crowd in the balconies as compared to the ghats. You will get a taste of the local culture while interacting with the locals. If you want to see a Maha Aarti, then you will have to visit Varanasi at the end of each year near Kartik Purnima.

An early morning sunrise aarti also takes place in Varanasi. Even that is beautiful. It is organised by Subah-e-Banaras. You can visit that one as well, if you are a morning person.

How Ganga Aarti is performed in Varanasi? 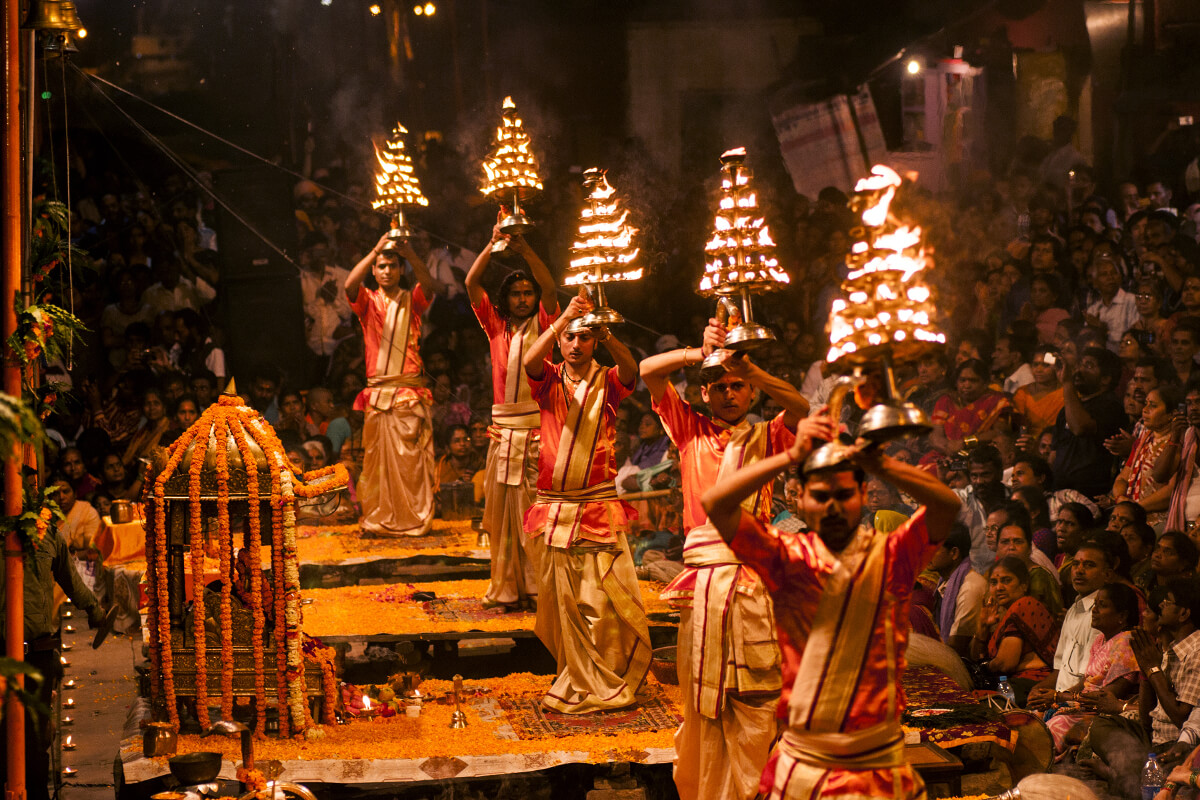 A lot of preparations have to be done before starting for the Ganga Aarti. The priests who are performing the aarti are supposed to wear a dhoti and kurta. The kurta should have a gamcha as well. Gamcha is more like a towel.

They gather five elevated planks with a layered brass lamp. There is also an idol of Ganga devi with incense sticks, flowers and conch shell. There are other pooja items as well.

Only learned Pandits can perform the aarti. They should have knowledge of the holy Hindu books like Upanishads and Vedas. The teams of priests is headed by the main priest who is the leader of Gangotri Seva Samiti.

The Aarti is a tray with lamps lit with an oil and small burning flame. The Ganga Aarti has exceptionally large lamps held and performed by the Hindu priests called pundits.

They encircle ritual place in clockwise way facing the River Ganga and offer the devotional thanks in that way. They are dressed in special attire like silks, exquisite materials, etc., and chant slogas or sing bhajans in the background. This is done as an offering of thanks to Maa Ganga.

It is believed by doing this they will also get the divine power of the water of Ganga. Then, the devotees take the smoke from the burning lamps and take it near their head as a mark of respect and to get blessed and purified by the Goddess

The aarti is a complete organised activity. It starts by lightning up the multi-tiered brass lamps.

Also, a well synchronised chanting of mantras begin when the lighting starts. Some of the priests also blow the conch shells. It is an indication that the aarti is about to begin. Also, the shells are known to sanctify the atmosphere. The other remaining priests light the incense sticks and offer it to the goddess in a clockwise circle.

The aarti has some preliminary mantras. Once they are recited, camphor is added to the brass lamps. Then, they perform the aarti with that. This aarti will surely give you goose bumps. You will feel the energy floating around you. You will be bestowed with peace and tranquillity. It is surely a very spiritual feeling. The mantras do have certain vibrations and you will be able to feel all of them.

After the camphor aarti is done, you will feel purity in the air as well. It is a different experience and it cannot be written or described. It can only be felt at the Varanasi Ganga Aarti.

What to see during Ganga Aarti Ceremony in Varanasi? 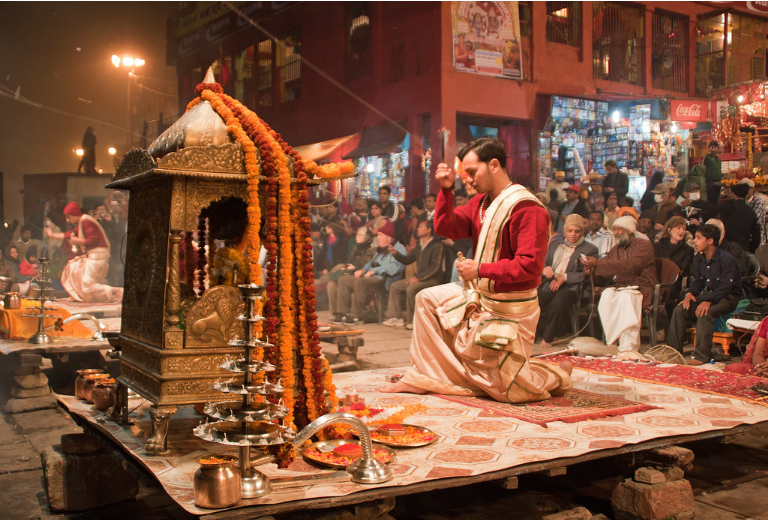 The Ganga Aarti Ceremony held every evening at the Dasashwamedh Ghat at Varanasi is one of the most spectacular religious or devotional rituals carried out in the world. It takes place in a choreographed way as priests stand clockwise in front of the River Ganges to offer the Aarti. The religious ceremony is held close to one of the most famous temples for pilgrims in India, Kashi Vishwanath Temple.

The whole aarti is a visual treat. Seeing a group of pandits in saffron robes in beautiful. The colours in a frame are worth a watch. There is the water, the deity, the saffron robes, golden brass lamps and people. A lot of incense sticks are lit and the canvas of the evening surely seems brighter.

Watch the synchronised action of the oil lamps. It has a huge fire and those lamps are really heavy. Although, the pandits are trained to hold them. The uniformity of the movement will surely leave you baffled and speechless at the same time.

Peacock feathers and yak tail fans are also waved in a synchronised manner during the aarti. After the ceremony ends, people lit small lamps and leave it in the river with flowers as offerings to Ganga. You might want to stay till the end and experience that as well. The river looks beautiful with lamps lit up.

It is a grand extravaganza as pundits of all age groups draped in silk type material robes in saffron and other shades offer an Aarti with huge golden looking brass lamps to Maa Ganga. It is said that these lamps are also around 2 kilograms. They are lit with small fires and they hold it in front of the river.

The other rituals include the ‘blow of the conch shell’ that loads your senses and the aroma from the smoke of burning incense sticks. They are also laid and waved in big patterns followed by the circular movements of the large burning lamps.

It is also done in a rhythmic manner as the chantings happen and bells sound in the background. It is one of the best visual treats with display of total devotion to Maa Ganga in grandiose.

When Ganga aarti is performed in Varanasi?

The Ganga aarti happens throughout the year every day. However, if you want to witness the grand celebrations, then you must visit during the Kartik Purnima. It starts from October and ends in November. It takes place at sunset every day.

Where Ganga aarti does takes place in Varanasi?

The aarti is carried out at the holy Dasaswamedhghat. It is near the famous Kashivishwanath temple in Varanasi. You will be able to find the way to the ghat easily as all the locals know the location of the aarti.

What is the Ganga Aarti Timing in Varanasi ?

Rain or shine, the ceremony is conducted on every evening during sunset :


The Ganga Aarti starts exactly at the sunset time. The starting time of the ceremony changes with sunset time. If you want to enjoy the ceremony from a good spot, you ought to reach the ghats by 5 in the evening.

What is the Cost / Entry Fee for Ganga Aarti in Varanasi

No entrance fee for watching the ceremony. People are welcomed to give any donation if desired. If you are planning to watch the ceremony from the river, you need to hire a boat. Boat Ride will be costly during this ceremony.

The Varanasi Ganga aarti is beautiful. It is different from the one carried out in Haridwar and Rishikesh. The aarti is highly choreographed in Varanasi and is carried out with much pomp and show. You must visit the aarti, if in Varanasi.