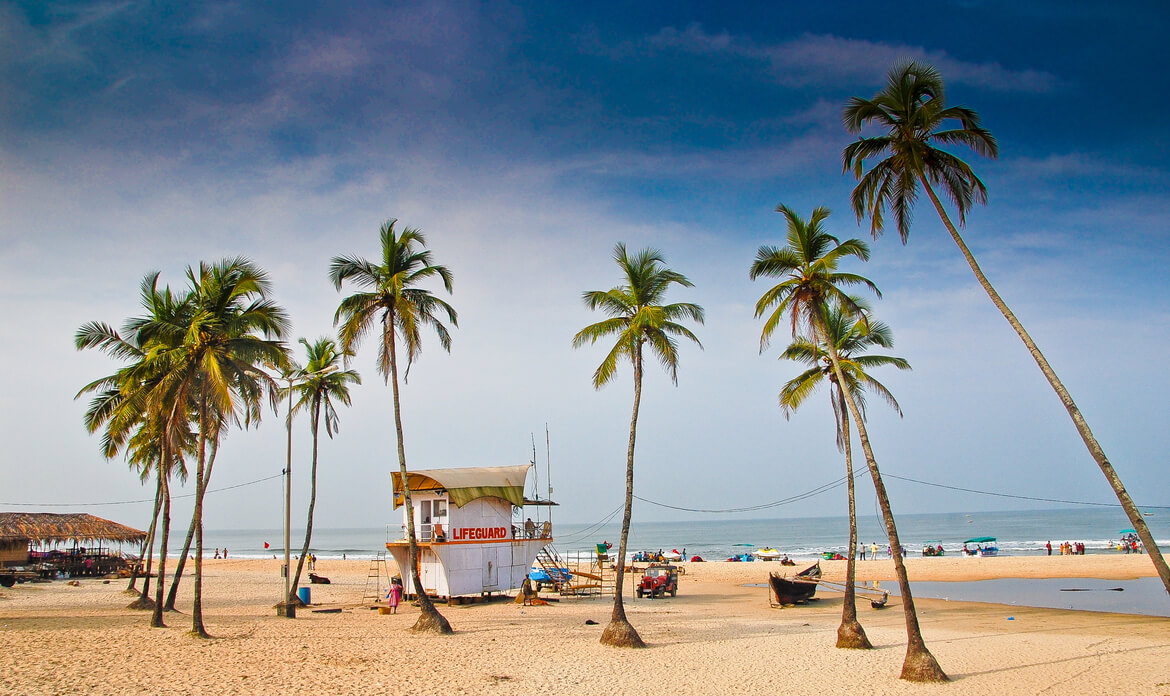 Colva Beach is the first major beach that lies to the south of the Vasco da Gama railway station. It is popular mostly within the Indians. Even though foreigners visit Goa a lot, for some reason, they relax in the further northern or further southern beaches. It is one of the oldest beaches in Goa.

3. Colva beach is quieter and calmer than the beaches in North Goa. Since Colva lies in the centre, it is easy to go to both North Goa and South Goa from this place.

5. Margao, the closest city to Colva has a lot of things to see. It is the cultural and commercial capital of Goa. Places of interest in this city are the Holy Spirit Church, Pandavas Cave, Rachol Seminary, Sri Chnadranath Museum, Grace Church et cetera. The Goa Chitra Museum is also here. It has been described as one of the most Charming attractions of Goa.

Colva beach can get uncomfortably hot during the months of summer. The temperature during the day may rise as high as 36 degree Celsius. The evenings, however, are comfortable, thanks to the cold winds blowing towards the beach. Colva beach can be visited throughout the year. However, most tourists prefer to visit the beach during the time of winter, i.e. between November to February.

How to Reach Colva Beach

You can travel to the Colva beach by all three means of transport. If you are going by air, the Dabolim International Airport is only 20.5. kilometres away from Colva. All kinds of airlines operate flights here like Indigo, Air India, Qatar Airways, Jet Airways, Air Asia, et cetera. If you are travelling by railway, the Margao Railway Station is only 9.1 kilometres away from Colva Beach. Finally, if you're travelling by road, the Margao city centre is only 8.9 kilometres from the beach.

Colva is not as expanded as Candolim or Baga beach. It doesn’t have many huge shopping malls or superstores here, but still, there are many stores selling all kinds of stuff. Most of one’s daily requirements are available here. The closest supermarket is in the city of Margao.

Although Tattoo parlours, massage parlours or even books stores are present here. Some of the souvenir shops at Colva are

This is a charity shop that sells second-hand books and souvenirs. The money they earn is donated towards the welfare of the four-legged creatures of Goa.

It is a jewellery store.

Colva is not a popular party location like that of Baga. It doesn’t hold big festivals or events. Most of the parties here are private and held in the nightclubs. The nightclubs here are

This was the first public nightclub to open in south Goa.It is located in the Colva Beach Resort. There is hip-hop, R&B, and retro music here and theEuropean and Goa DJs play here. Parties are usually held here on Fridays and Saturdays.

You can find sports, cocktail, and music bar in this lounge.

This is located at the far north of the Colva beach. There is live music, DJ and it allows the people to dance on the beach under the sky.

This bar provides the people with international food, live music, karaoke, and DJ.