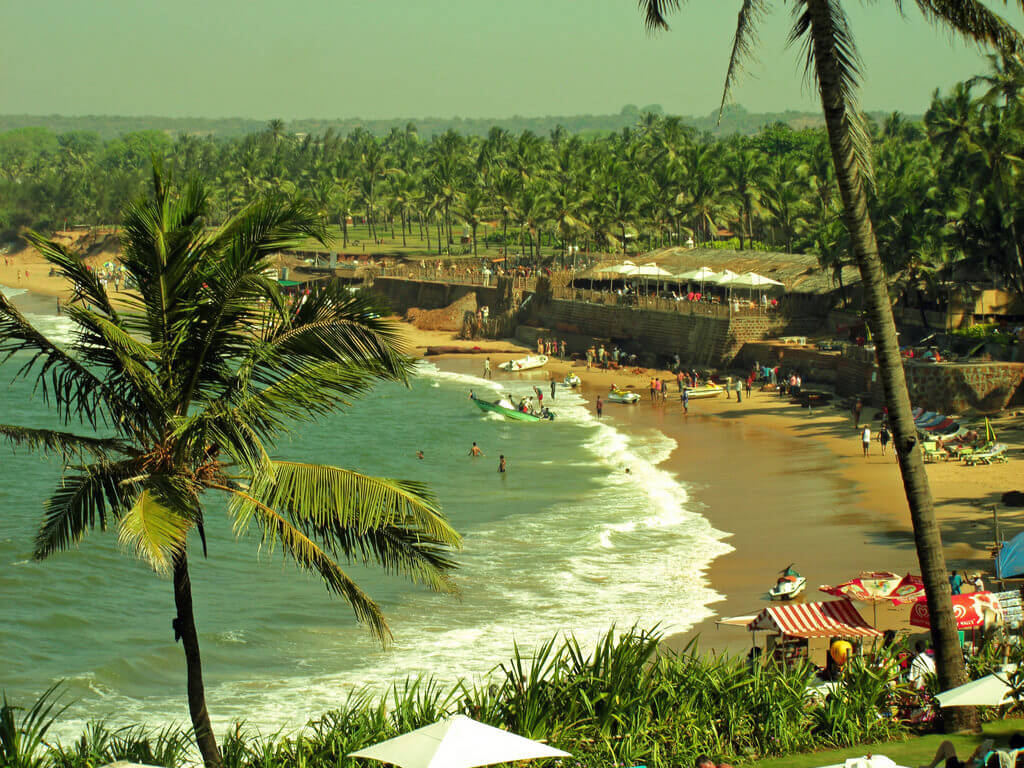 This small state situated on the south western coastline of the Arabian Sea has everything from breathtaking landscape views to ancient Churches that mark the starting times of Christianity in India.

It is famous for the bustling beaches and striking nightlife and the old monuments and temples across. It is one of the most popular and crowded tourist destinations in India with many people from around the world who also settle down here after visiting this place.

The Konkan region as it is popularity called as it is situated in between here, there are equatorial forests that measure around nearly 500 sq. miles that contributes to the rich bio-diversity in this smallest state in India with more than 250 birds species, nearly 50 types of animals and 60 different reptile species.

The capital of Goa is Panjim or Panaji in English, and the biggest city in the state of Goa is Vasco da Gama named after its discoverer.

This world renowned monument that showcases the history of Christianity in India is an architectural marvel built in Baroque architecture completed in 1605. The UNESCO World Heritage Site is over 400 years old and houses the mausoleum of St. Francis Xavier.

People come from around the world to see the mortal remains when it is out for public view once a decade. It is a great sight as it is adorned with ornamental architectural style with precious stones inside and the floor laid with marble.

2. Asia’s Only Naval Aviation Museum is at Goa

There is the only Naval Aviation Museum in Asia that is situated in Goa. The military museum that is situated in Bogmalo has thirteen decommissioned aircrafts. It was initiated way back on October 12th, 1998 and showcases the development over the decades of the Naval Air Arm.

When the museum was first unveiled there were only six and now there are thirteen aircraft. It comprises of two parts which includes a double stored indoor gallery and and outdoor exhibit. It was situated at six kilometers from Vasco.

The Big Daddy Casino spreads across 72 meters in length and 24 meters in width with three decks over the Panamanian vessel that is run by Golden Globe Hotels Pvt. Ltd. You have to approach the unique floating casino on River Mandovi by a ferry ride from Panjim port.

It boasts of over 100 tables spread over 50,000 sq. ft. over the three decks and a specific area dedicated for private gambling including booking availability for private suite booking. It promises blend of gaming and casino with stakes getting higher as you go upper. You can also play against other gamers.

4. The traditional Seafood Cuisine in Goa

These days the people of Goa are taking modern cooking tastes technologies and methods. But, in most households in Goa they go for traditional cuisine and cooking in a clay pot over a wooden fire.

5. Richest Indian State for per capita

Geographical area is smaller in size than most big states in India. However, the crowd puller of tourists and visitors from around the world still is one of the top richest states in the country. So, it has a very high per capita but is comparably lesser than Maharashtra due to the larger population, area, and size.

However, it still is one of the most popular tourist destinations in India and a lot of revenue comes from it in addition to several various types of industry in the state.

6. Home to Largest Church in Asia

The Se Cathedral situated in Old Goa was finally completed in 1619 on the remains of earlier structure over several decades constructed mainly with Portuguese – Manueline architectural style. It was originally built as a victory when the Portuguese took over Goa in fifteenth century.

On the day, it was the feast of St. Catherine, hence cathedral was given her name and the main alter is dedicated to Catherine of Alexandria with ancient pictures on both sides.

The Church also has Golden Bell famed for its rich tone and is said to be the largest in Goa. It also has six panels with carvings of scenes of St. Catherine’s life.

Goa is popular among foreign tourists and visitors from around the country as one of the top places in the country for night life and liquor. There are several country made international products available here and some are purely country made liquor. Many of them are closed down while some are open. There are many popular bars in Goa and also the less famous shops but there are over a 1000 of them.

The Portuguese ruled in the region for over 400 years. The Government of Portuguese India signed an official document to surrender the rule on December 19th, 1961. The people of Goa celebrate this day to commemorate the Indian armed forces freeing the state from the Portugal rule. So, this is observed by them as the Goa Liberation Day every year.

Also known as the Sahyadri Hills the picturesque hilly crest runs across the western coast of many states of India from Maharashtra / Gujarat to Kerala / Tamil Nadu. Among these there are many spots that are chosen for the UNESCO World Heritage accredition.

The Western Ghats of Goa has several species living in the rich bio-diversity and greenery. While many speak only of the tigers there are several elephants and rare birds too. It offers a magnifiscent view with the misty westeren Ghats.

As there was Portugal rule from 450 years before Goa gained independence in 1961, the country offered the people living in Goa Portugal citizenship so those who are born on or before the date when the state of Goa was integrated into the country and residents of other places such as Daman & Diu.

11. One of the highest falls of India - Dudhsagar Falls

Goa is famous for several things and also housing one of the highest waterfalls in India – Dudhsagar falls. This four tired waterfalls which literally means Sea of Milk.

There are only limited ways to reach the Dudhsagar falls so plan and research well before going to witness the beauty of the waterfalls. It is a splendid view but take safety precautions before going and beware of fake tour guides.

As most of the state lines the western coastline of India this small state has several beaches alongside. Each beach in Goa has a unique reason to visit it.

Known as the land of sun, sand and surf, you can imagine that how many adventure sports are available here. Get to see the hippie style people who have stayed here for a long time. Find the lighthouse and weekly flea markets that are other reasons to visit the beaches in Goa along the azure waters of the Arabian Sea.

Since the year 2004 The International Film Festival has shifted to the permanent venue to host the festival which is in Goa. It is held at towards the end two months of the year but not particular dates every year.

This has also gained global popularity and fame over the past years with the first edition in the year 1952. The objective of the film festival significant in Asia is to offer a common platform to international cinema for film art and excellence and appreciating film culture in their context of cultural as well as social ethos.

Now Goa is organized jointly by the State Government of Goa and Directorate of Film Festivals under the Ministry of Information and Broadcastings.

The state of Goa also is the first place where printing machine brought down by missionaries of Portugal and established here. This was back in the mid sixteenth century after which several older books as well as manuscripts were printed by the help of printing machine press.

On April 30th 1556, a letter dated was written by St. Ignatious of Loyal and introduced in India established in Goa. So, you can know that the region of Goa was the first place in India for the printing press to begin.

Goa Medical College was not only the first in India but also one of the first medical colleges in Asia. It was established in the year 1842 by the Portuguese in Goa’s capital city Panjim.

However presently the medical college is in Bambolim at four km distance from here. The medium of medicine education was originally in Portuguese and is now in English.

16. Gambling is legal in Goa

There are several different forms of Gambling and recent surveys have found that the local people engage in current gambling more than the casinos. Moreover, there are casinos that float on the water inbuilt in the huge boats anchored to especially at River Mandovi.

There are also lotteries run by the state that gets a lot of revenue towards the state and the funds are diverted to social welfare cause.

The casinos on land and off-shore casinos are also run by privately and contribute to the tourism industry of Goa. So far, the casino and gambling market attract over fifteen thousand people everyday.

Tourists and visitors to Goa know about the crowded places, loud music, rush roads, and so many people getting in the way of photos. The quintessential islands of Goa provides a respite from these things and many more with a plethora of options for you.

The over 150 islands of Goa provide respite so visit the top islands of Goa for at least once in your life. The famous islands include Chorao, Divar island, Butterfly island, Sao Jacinta Island, Monkey island and Raneache Zuvem but there are many more.

It is said there are at least 40 estuarine, 8 marine, and about 90 riverine islands in Goa.

In addition to all the above reasons and beaches in Goa, the small state is also famous for its flea markets on the beaches. Even if you’re not going to shop till you drop here, you can still check out the tings sold here.

There are spice aromas, fascinating looks and weird sounds and so you get a sensory overload here. While there are some markets that operate throughout the year others only run at peak season such as from November to March.

Your trip to Goa is incomplete without a visit to any of these interesting places. You can find these flea markets on almost every other day or weekend organized on various beaches of Goa. There are many but these are the most popular flea markets in Goa.