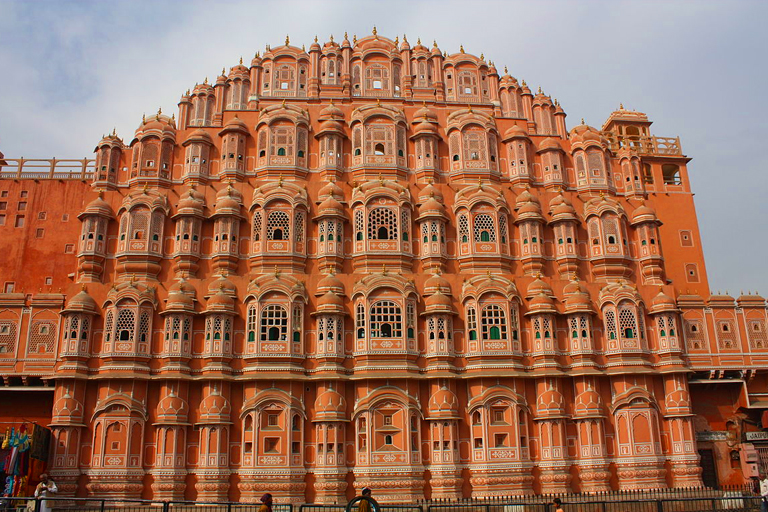 History about the Hawa Mahal

The palace was built in 1876 under the reign of Pratap Singh Marah. It was an extension of the woman’s chamber of his palace. The building was painted with calcium oxide paint to give the distinct pink color. The main function of the palace was to allow the women of royal family to watch the street without common people spotting them. The windows are angled to allow a good view of the market area where religious ceremonies and processions take place.

Hawa Mahal is famous for

This structure is built like the crown of Lord Krishna, Hindu God. It has five stories with honeycomb structure. There are 953 windows in this palace. The top three floors are one room width where women stand and watch the road. The first two floors have patios furniture. The palace is built with minimal ornamentation. The building was built with sandstones and painted pink. You can find stone inlay work and arch works inside.

Tourists should enter the building through an imperial gateway, which opens to a large courtyard. There are two buildings on three sides of the courtyard and the Hawa Mahal stands on the east side. There is a small museum in the courtyard. The museum has a small collection of weapons, articles and antiques that were used in the past by the royal family. Each window has a chamber behind it where people stand or sit and watch the streets. There is a fountain in front of each chamber. The top two floors are maintained by the archaeological department and can be accessed through ramps.

Where Hawa Mahal is Located ?

This palace is located near City Palace. It stands on an end of the City Palace. The monument is found in Hawa Mahal road. You can hire taxis, autos or buses to reach Hawa Mahal. The nearest metro station is the Merta road station.

The best time to visit is during early morning when the golden ray of sun fills the palace. The structure’s windows are normally closed to avoid accumulation of dust. Thus, it is not always possible to enjoy the wind gushing into the palace.

Photography is not allowed from inside the palace.