Must See Places to visit in Mahabalipuram

Counting the list of traditional towns of India, Mahabalipuram is one of the towns located on the sea-side. The town rules for its artsy golden beaches, attractive historical monuments and much more. This all makes Mahabalipuram one of the unforgettable destinations.

The town always welcomes a large crowd of tourists throughout the year especially from Puducherry and Chennai. Popular by the name of Mamallapuram, this tourist destination is filled with cafes which lead to the oceanfront, cuisines restaurants, basking and surfing, and much more. While the mornings can be devoted to the historical temples there, the afternoons can be spent seeing some architectural places and dining at some delicious seafood items.

So, are you planning a trip to Mahabalipuram? Here are some destinations you should not miss out for a holistic experience. Explore the list of must see places to visit in Mahabalipuram

1. The Captivating Beaches of Mahabalipuram 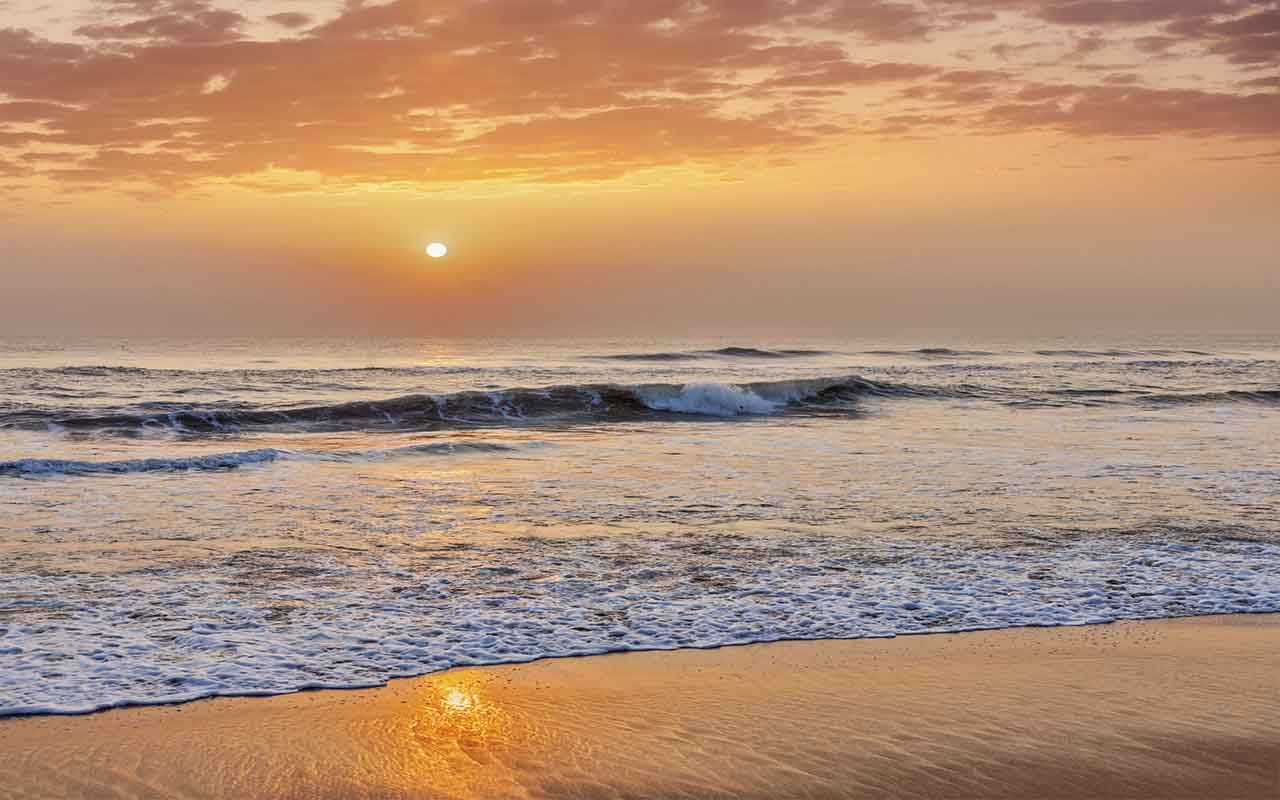 Want to have a rejuvenating vacation this time? The golden beaches of Mahabalipuram are surely going to help you out. A major crowd is experienced at the beaches of this coastal town which stretches to nearly 20 km. The coastline is divided into two, providing you with two attractive beaches, Pallava Beach and Mahabalipuram Beach.

The beaches are widely visited by various foreign tourists for rejuvenation and revitalizing the entire soul, mind, and body. The golden sand on the beach ends provide you with an opportunity to visualize the mesmerizing beauty of the beach and the adorable sunset or sunrise. Basking in the warmth of the sun and the tasty coconut water is sure to capture your hearts.

Be it a family holiday, honeymoon, or merely a casual trip with friends, the beaches provide a number of beach activities for every age group. Some sports that excite the adventure lovers at these beaches are kite surfing, windsurfing, surfing, boat rides, quad bike rides and much more. 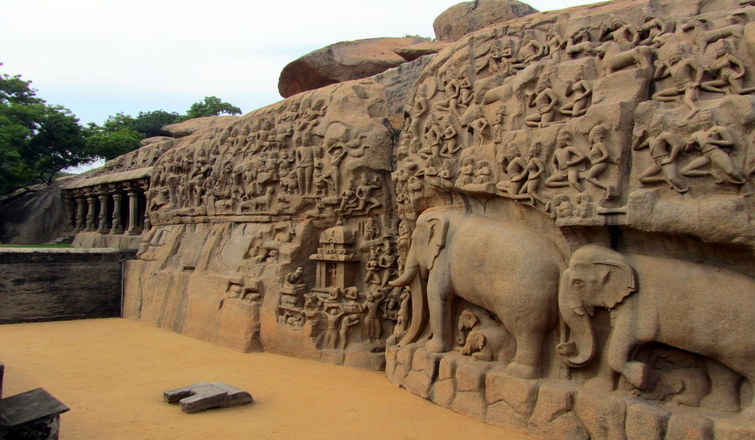 This is among the primary attractions of the tourists visiting Mahabalipuram. Counted among the most ancient and greatest artworks of India, Arjuna’s Penance is a rock work combining two monolithic rocks. The rock work represents the penance of Arjuna which he carried out for gratifying Lord Shiva for getting the celestial weapon very impressively.

The rock carries several carvings which display the scenes from Hindu Mythology including human figures, animals and God images, by giving them the form of a sculpture. The site is situated at a height of around 43 feet which stretches with a length of around 100 feet. The hard work is also praised and included in the list of masterpieces of the world by the UNESCO World Heritage Site. The open-air sculpture is among the intricate Indian art pieces carved with the utmost detailed work.

3. Dredge into the Marvelous Structure of Thirukadalmallai

It is a historical monument which is popular for the structure and arts, and it carries the Thirukadalmallai. The structure was craved during the rule of the Pallava Kings in around 6th to 8th century BCE. Also, known as the Sthalasayana Perumal Temple, this is among the 108 temples of Lord Vishnu in India. The temple is entirely crafted in the Dravidian Pallava architectural style. It still remains crowded with devotees for offerings and other religious activities during festivals.

The prayers and offerings during the ceremonies are quite popular and connected with ancient rituals. For the prayer ceremonies, the temple doors are open for the devotees from morning 6 to 12 in the afternoon and from 3 in the afternoon to 8.30 in the evening. During the entire day, a total number of 6 prayers and rituals are offered and performed. Again, while visiting Thirukadalmallai, one must not forget to visit the gopuram which is a monumental tower. It is in white color which has ravishing beauty compared to other gopurams in golden around the temple and the entire Mahabalipuram.

4. The Largest Seashell Museum and Aquariums 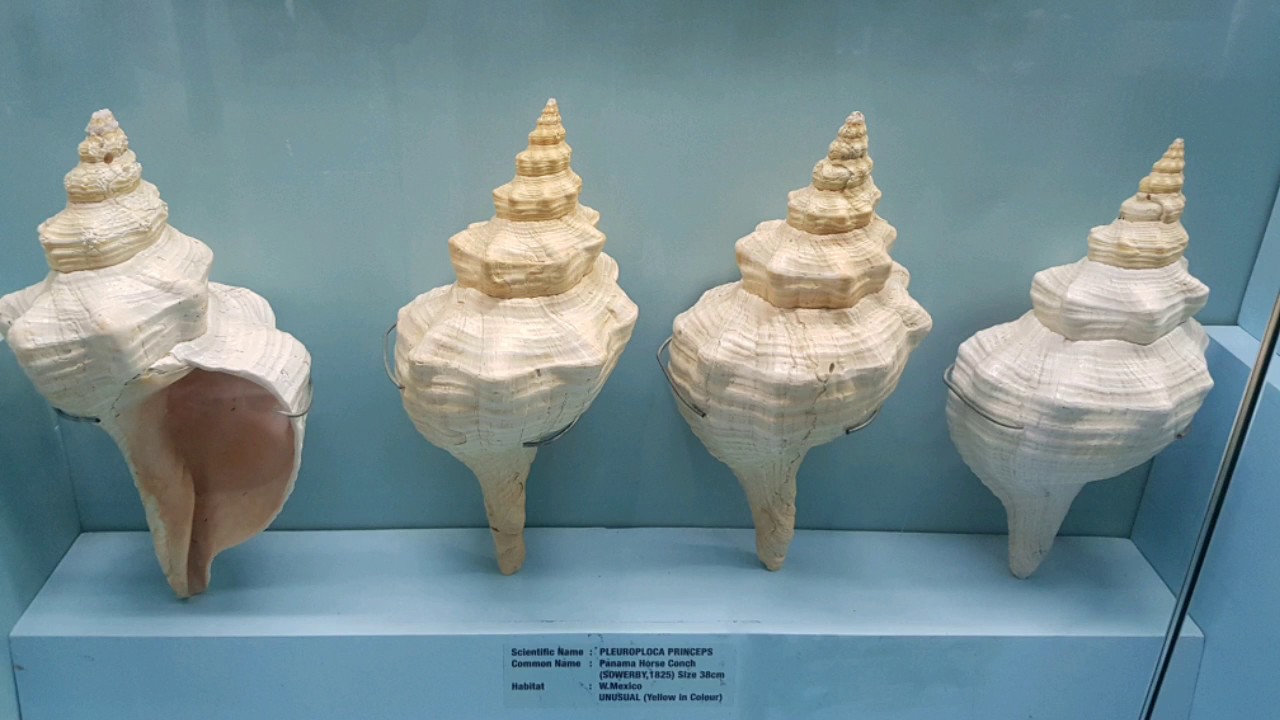 Listed in the list of best Museums and Aquariums of India, India Seashell Museum and Aquarium is popular for the largest collection of seashells. For the people willing to study marine life, this Museum and Aquarium is the treasured place to be in. The monumental place adores around 40000 different types of unique shells along with fossils, shark teeth, and whale fins too. Covering an area of around 2 acres, this museum and aquarium also includes a boutique named Maya Bazaar where you can purchase various marine items like seashells, pearls, conch, etc.

The beautifying jewelry in pearl and various other artifacts are something that would surely steal your heart. Again, for the seafood lovers, not visiting the scrumptious restaurants and the delicious ice-cream parlors would be a failure. The places serve with mouthwatering seafood varieties along with a wide variety of desserts which you shall never forget. With a minimal entry fee of Rs. 150, you can enjoy an entire day in the aquarium and the souvenir shops. 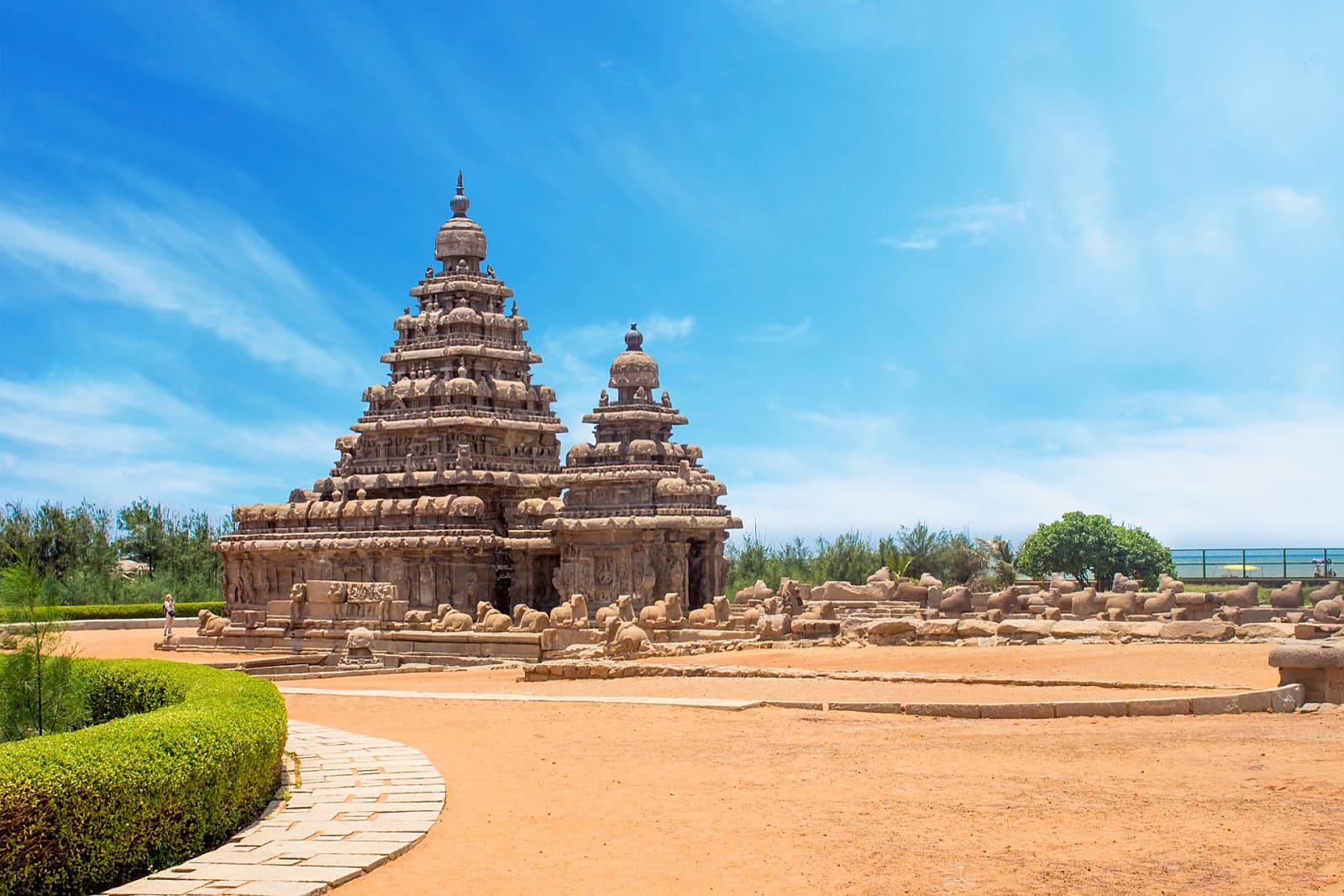 This picture-perfect place in Mahabalipuram is located on the Coast of the Bays which is quite captivating for the tourists. The masterpiece Pagoda is built using granite that contrasts both the sky and the sea, making it a memorable place to visit. The monument is given the name due to the closeness it comes with the shore. However, the actual name of the monument is still unknown.

According to various facts, the Shore Temple is considered to be the only complex existing among the seven shrines which have survived after the deadly Tsunami. The temple is inclusive of three sanctums where 2 are dedicated to Lord Shiva and 1 to Lord Vishnu. No doubt, the sanctums are slightly defaced, the still stand among the best rock sculptures with a single rock. Apart from the two sanctums, the temple also includes various small shrines that entirely complement the Pagoda. 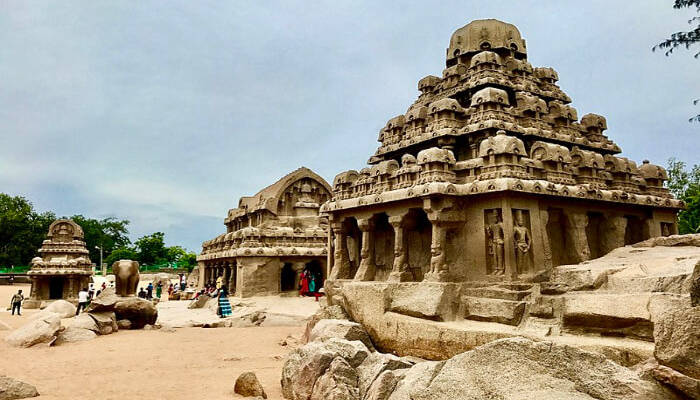 It is located on the Southern end of Mahabalipuram. Pancha Rathas is another monument that is mostly visited for the architectural beauty it is craved with. The place houses the Pancha Rathas or the five chariots which are craved with artistic skills from granite. The sculptures are again another example of the Dravidian architectures related to the Pandavas from the era of Mahabharata. The chariots are named on the names of the Pandavas. The architectural premises include a temple in the shape of a hut which is dedicated to Queen Draupadi.

There is a huge sculpture as you enter the hut of Goddess Durga. The place also includes the Ratha of Arjuna which is entirely dedicated to Mahadev, or Lord Shiva. It is also sculpted with images of Gods, Goddesses, and human beings too. There is another chariot named Yudhisthira which is devoted to Lord Shiva and has various sculpture forms of Lord Shiva. There are two more Rathas that are devoted to Lord Indra, known as the Nakul and Sahadeva Rathas which carry the sculptures of Nandi and an elephant along with other animals. Lastly, there is a mammoth Ratha that is named after and devoted to Lord Bhima. The legendary place dwells in the rustic beauty of the destination.

7. The Appealing Butterball of Lord Krishna

Mahabalipuram is filled with various attractions, but the gigantic Butterball of Lord Krishna surely comes with its own uniqueness. The ball is a huge granite boulder and is among the most visited place in the town. The Butterball is on top of a hill which stands around 16 feet tall without any hitch.

According to some facts, the rock was once pulled by 7 elephants for a trial to bring it down the slope, but the practice failed. The scientists are still working on the reason why the rock is standing still on the hill for around 1200+ years. However, no one is able to still figure it out. The surprising historic monument is not only the center of attraction for the visitors but also among the unsolved mysteries for the scientists and the archeologists.

It is located on the outskirts of Mahabalipuram. Dakshina Chitra Museum is a place which would allow you to explore the lives of the people living humbly in the Southern states. Counted among the culturally living museums, it brings to you a collection of fine craft and art evolving with architecture and the Southern lifestyles of India. The place homes 18 authentic and historic houses all in different patterns or designs.

The destination allows you to enjoy various activities to spend your entire day as well as provides you with an opportunity to learn some of the crafts. The Museum was established with the purpose of preserving and promoting the lifestyles and culture of the Southern States for learning its importance and benefits from the heritage.

Along with all these, some other destinations in the list include the Crocodile Farm, the Mamallapuram Dance Festival, the Cave Temples, Ganesha Ratha, Tiger Caves, Sculpture Museum, Nithya Kalyana Perumal Temple, Mudaliar Kuppam, and many more.

So, when are you planning your trip to Mahabalipuram to explore the ancient heritage this Southern State of India has salvaged!