Nepal, located in Asia, is one of the most known locations among the tourists. A lot of people plan on visiting Nepal and even though there is no specific time which is considered the best for this tour, you might want to consider the time of the Holi festival for this trip or Holi Celebration in Nepal.

Holi, which is also known as the Festival of Colours, is famous as the most illustrative festivals of the Hindu community. It is not only the most popular festival in Nepal, but is also the most famous one. The day on which Holi is celebrated is a full moon in the month of ‘Fagu’, according to the Nepali Language.

This month basically means the time of February and March according to the English calendar. The Festival of Colours, or rather, Holi, comes after the Dashain and Tihar Festivals and these festivals together extend the period of festivity for up to a week. The celebration of Holi signifies the triumph of good over evil and also marks the commencement of the spring season. 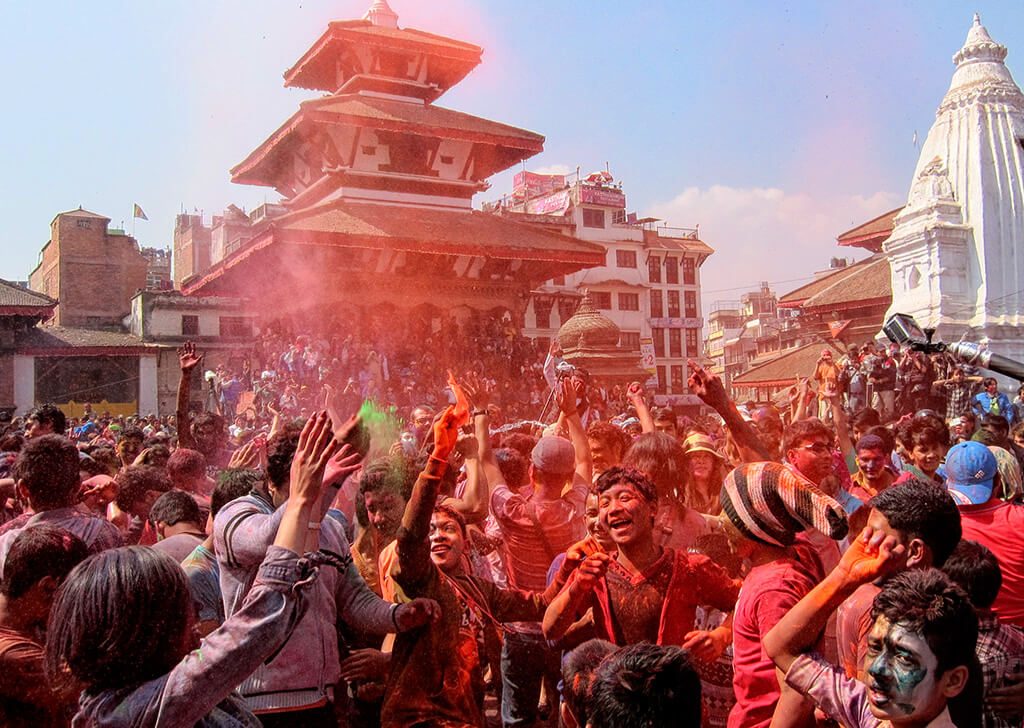 The most enjoyable and ecstatic activity of this festival is playing with the colours. The festival of Holi includes a lot of colours. The colours used here are either powdered or watered and it is used to colour each other, blessing them with good blessings and wishes. Throwing colours at each other is how Holi is “played”.

The origin of the Festival of Colours can be marked to the period when the Indian Epic, Mahabharata was first composed.  According to the legend, the King Hiranyakashipu, was a very arrogant individual and as a result of that he had limited the devotion of Lord Vishnu. It was later that his son Prahlada, who turned out to be an ardent enthusiast of God Vishnu, contradicted his father.

This eventually drove the arrogant king mad and he ordered his sister, named Holika to burn the prince, his own son, during a full moon night. It is believed that the devotion of Prahlada earned him the care of Lord Vishnu and he escaped unharmed and instead, Holika got burned. The stepping out of the prince signified the triumph of good over evil and the people had thus adorned him with colours.

Read more – Top things to do in Nepal

Table of Contents hide
Rituals and Traditions
When is Holi in Nepal?
What are the best places to experience Holi in Nepal?
Celebrations in Nepal Paint Festival
Cuisine During Holi Celebration in Nepal
Tips for Nepal Holi Festival

The rituals that are followed in the Holi celebration in Nepal mostly consist of a ceremony where people place a bamboo stick or a wooden pole erectly. This stick is decorated with a lot of colourful materials.

The celebration of this festival begins a week ahead of the official day of Holi. Most of the Nepali Women dress up beautifully in colourful garments to celebrate. They carry auspicious things and circle the erected pole, praying for blessings.

On the eve of Holi, Chir Haran or Holika Dahan is celebrated. This is when the stick is brought down followed by the scorching of the coloured decorates. This also marks the official beginning of the festival of Holi.

The celebration of Holi is classifies into two parts, the first part is the Holika Dahan and the second part is the Rangwali Holi. The area of Durbar Square and the areas surrounding it are filled with vivid powders of different colours and also colourful waters.

The whole area is also given a fun and joyful atmosphere with the help of some music. It is on the eight day of the ceremony that the Holi Bonfire is made and this bonfire marks the end of Holi.

Read more – How to Travel from India to Nepal?

When is Holi in Nepal?

The festival of colours, or Holi, can easily be listed among the most famous festivals in Nepal. It is a known and common fact that Holi is celebrated on the day of the full moon in the Nepali ‘Fagu’ month, which falls somewhere from the middle of February to middle of March. It usually lasts for two days and occurs after the Dashian Festival and the Tihar Festival.

What are the best places to experience Holi in Nepal? 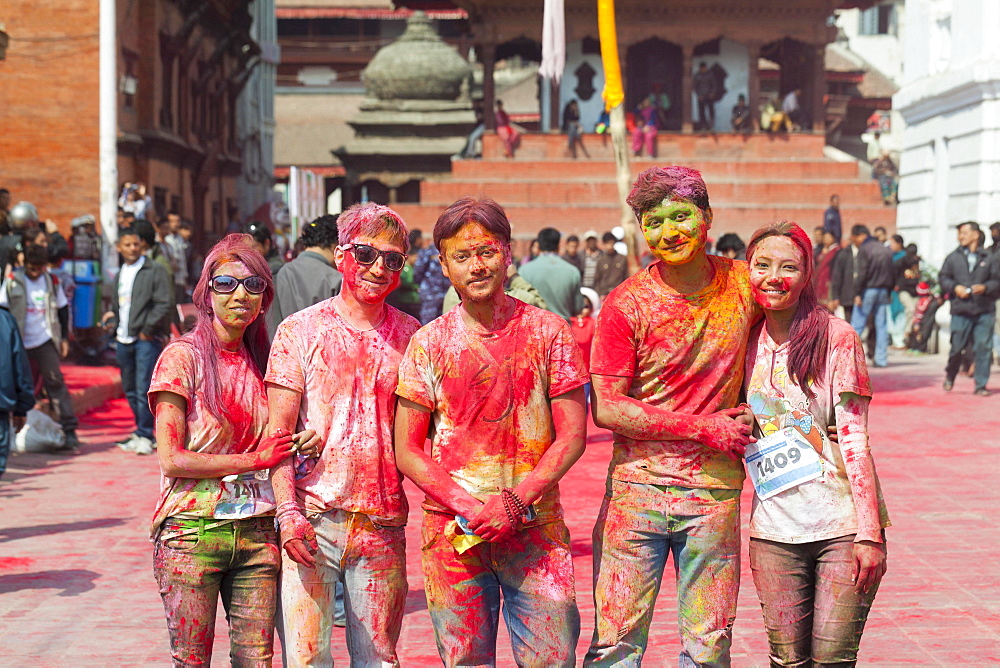 The best celebrations of Holi are seen in the streets of Kathmandu. During the period of 10 AM and 3 PM, if you stroll through the narrow streets in Kathmandu, you’ll get a first-hand experience of the celebration of Holi in Kathmandu. However, be aware of the surprise colour attacks on the people.

Even in Kathmandu, the place where the best Holi celebrations are observed is in the Thamel Streets, on the Durbar Square. Even though this area is extremely crowded, once you experience the celebration here, it’ll all seem worth it.

Another one place which is recommended to experience the Holi Celebration in Nepal is the Lakeside Road in Pokhara.

Apart from this, you can also see little kids enjoying the festival in some remote areas of Nepal. The festival is celebrated throughout the country however, as a tourist, the best place to experience it is in Kathmandu. No place would seem as grand in Holi after you’ve seen in the celebrations in Kathmandu

Also Read – 10 Ultimate Things to Do and See in Kathmandu 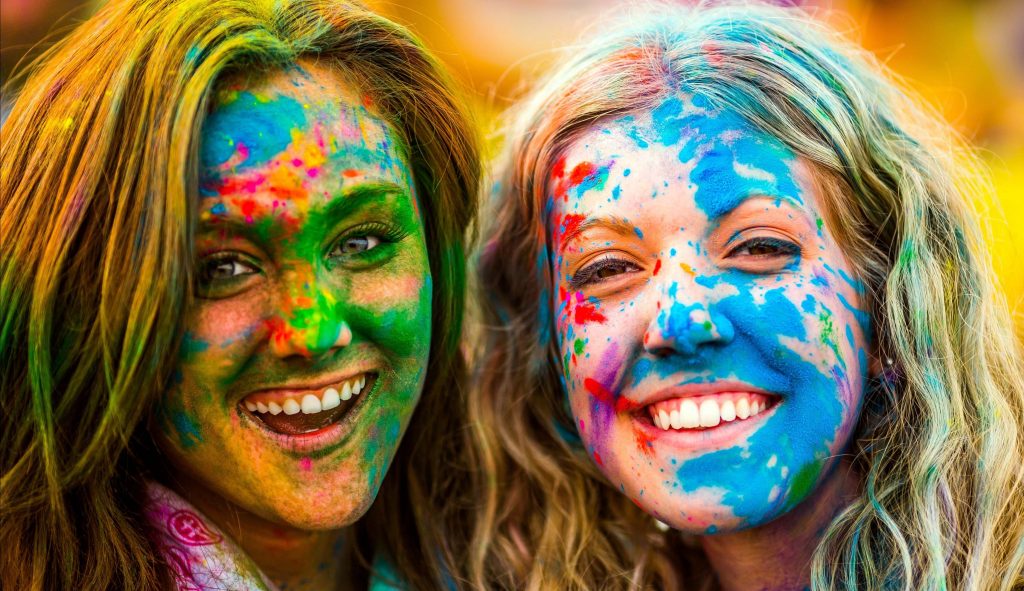 The day of Holi is a national festival and on this day, every shop is closed. All the members of the society eagerly participate in the festival and get their faces and bodies painted on with colours. Either they are coloured with the sprayed with powder colours or they are also sprinkled with water colours by all – be it friends, relatives or strangers.

Participating in this festival locally can earn you both a gentle touch of colour and even an attack of a heavy splash. You might also be chased by the kids or even older people with some water balloons. You can also buy a ‘pichkari’, which are basically water guns and join the celebrations with the people. Powdered colour, also known as ‘gulal’ can be used to paint the face of others.

Even as an adult, you can take part in this joyous celebration and experience being a kid again for one day. The celebrations are fun, joyous and are filled with laughter, smiles and celebrations. Originally, these colours were made only of organic components like bilva, haldi, sandalwood, neem, turmeric.

Unfortunately, nowadays synthetic colours with the help of chemicals are being processed so that they can be found in abundance and are also cheaper.

Holi is one of the best times to organised some concerts or some cultural events, not only in the capital city of Kathmandu, but also all throughout Nepal. Many celebrities show up to these events, attracting even more crowd to these celebrations.

The celebrations extend up to late nights and are a perfect way of celebrating a festival with your friends and loved ones. During the festival of Holi, the whole of Nepal can be defined in four words – water, colour, music and sweets.

Cuisine During Holi Celebration in Nepal 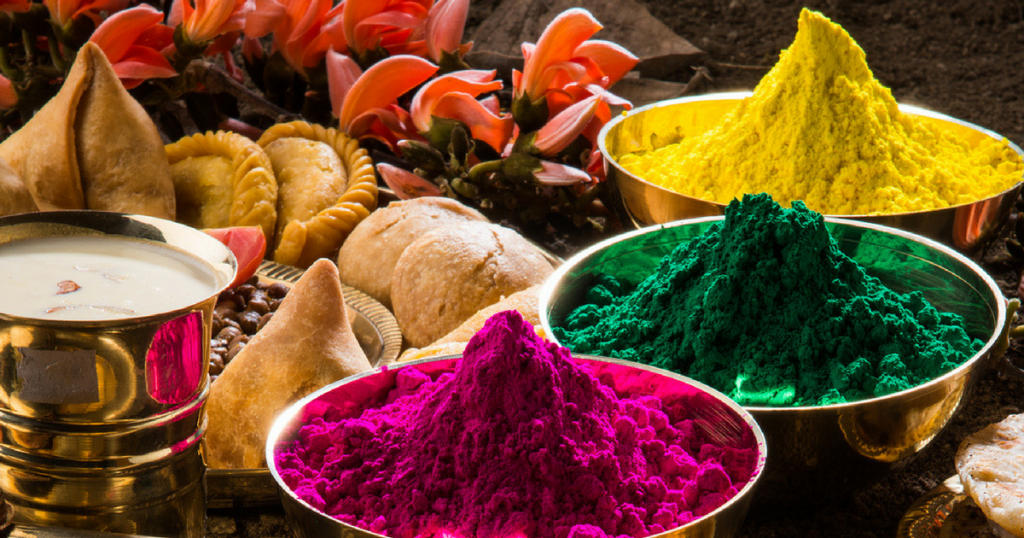 It is an old form of sweet which is made of dried milk powder and crushed nuts. Along with the colours, these sweet beverages and deserts never fail to make this festival worthwhile in Nepal. Apart from these traditional food, there are also several other trademark Nepali dishes that can be easily found in this country, an example of this being Momo.

While travelling to Nepal you can also explore the Famous Cuisine of Nepal.

Read more – Top 12 Most Beautiful Destinations to Visit in Nepal

If you’re planning on experiencing Holi in Nepal, there are a few things that you should keep in mind. A few tips for Holi Celebration in Nepal are –

1. It is necessary to dress properly for Holi. Since it is the colour of festivals, wearing new of good clothes for this day makes no sense. Instead, you should wear such clothes which you can get dirty without any regrets. You can keeps these coloured clothes as a souvenir or you can also try to wash the colours off.

2. It should be marked that even if you try to wash the clothes, the colours will still stain the clothes for a short period of time.

3. If you’re carrying a camera, it would probably be a good decision to have it covered with plastic or any other waterproof material to protect it from getting damaged.

4. During the time of Holi Celebration in Nepal, the best location for clicking best pictures is the Durbar Sqaure in Kathmandu.

5. Since these are not only powdered colours but water colours as well, it is advised to not carry too much money or even any kind of valuable jewellery.

6. For those who have sensitive skin, it is a must that you pay attention to the colours to avoid any kind of negative reaction on skin.