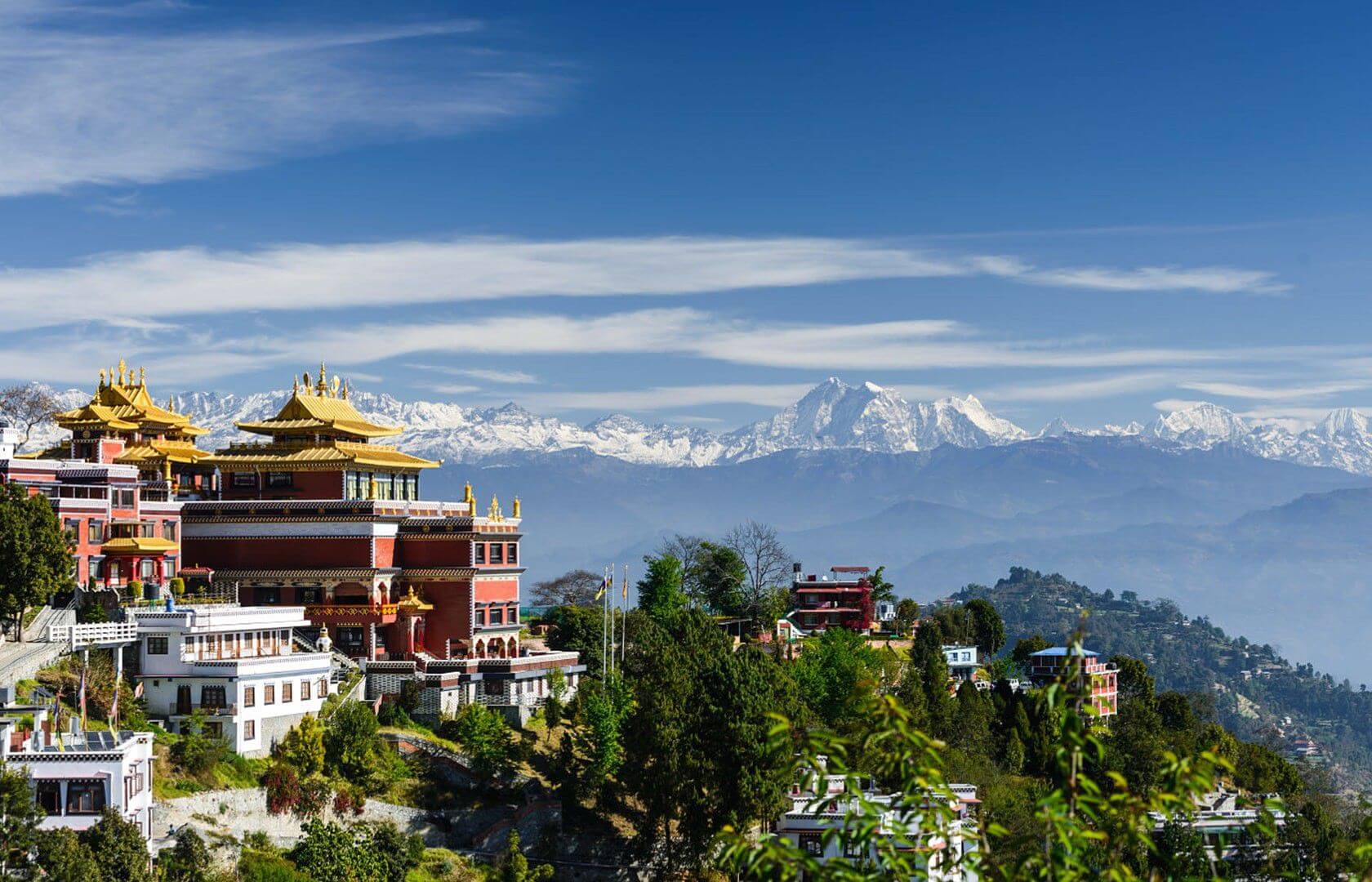 Situated so close to the capital of Nepal, Kathmandu this former summer rest house of the British, Indian and Nepali royalties, a quaint village town is now one of the top tourist destinations in Asia.

The original chirping of birds early in the morning and the constant humming of breeze as it blows through the evergreen pines. So Elysian amidst nature, it offers one of the best view points of Asia’s greatest mountains – the Himalayas.

It is situated at a height of 7000 feet above sea level which is roughly 2000 meters, on the sidelines of Kathmandu Valley. It offers panoramic views of the 8 ranges out of the 13 Himalayan ranges from anywhere even from your hotel window!

This picturesque village was once an ancient fort constructed to oversee the external activities of various other kingdoms. It later was utilized as a summer retreat for the royal dignitaries of British, Nepal and India and the Royal family. This amazing paradisaical village is now one of the most popular tourist destinations in Asia.

Top Attractions to Visit in Nagarkot

One of the greatest things about this country is definitely the rich bio-diversity. Get to spot very colorful and amazing butterflies around. It is a hiking journey of nearly 12 kilometers starting at the Nagarkot Panoramic Hiking Trail. You can find the villages and see the local culture of Tamang. They are warm, hospitable, friendly and ready to welcome you.

This hike helps you to witness one of the incredible viewpoints of the Himalayas in Nepal. And if your day is lucky then you can also spot the tallest mountain peak – Mt. Everest too! The time taken to complete this task is at least 3.5 – 5 hours if you’re fit. There are also other attractions that you can see on the way such as Cheese Factory, Gairi Gaun, Katike, Dhada Gaon, Baluwapati Village, and also Mahankali Temple.

This is one more great place where you can travel hiking and watch one of the greatest magnificent statue of Buddha in Golden highlighted in the center. There are beautiful terrace gardens that you can see on the way while you make it to the statue.

The Namo Buddha situated amidst the mountains close which is well known as Supreme Sacred place as it is one of the greatest Buddhist Pilgrimage Site in Nepal.

People from all over the world come here as it is considered most sacred for the devotees. The old temple and a cave with statue of prince, as was his previous life. Also, the nature spot is great for meditation and peaceful walk around.

This is one of the best haven for the thrill seekers and adventure enthusiasts as you get some of the highest points for paragliding. There are some adventure – sports organizers that offer the paragliding to those interested from the skyline Himalayas in Nagarkot.

It is a truly adrenaline pumping activity as you also get a bird’s eye view over the Valley. It is an adventurous twisting and turning in air as you fly over the great forests, rural areas of bordering places, and wilderness of the mountains.

It provides the most stunning view across the mountains. and great amazing landscape from the zones that take – off. Moreover, it is only possible if the climatic conditions permit.

This UNESCO World Heritage Site is situated in close proximity to Nagarkot. The temple that is nearly 2000 years old will not fail to fascinate the history enthusiasts and nature lovers. The temple that is dedicated to Lord Vishnu is set amidst Magnolia trees on top of a hill and overlooks the splendid greenery in the valley. The style, and carvings in both wood and in stone on the site are mesmerizing.

The duration of such a tour generally takes 4 hours and one the way the sights include smaller green areas, rural towns, people of Nepali culture and lifestyle, and various ethnicities. Some of the carvings on this site that is listed as 1979 AD also belong as old as fourth century AD.

This is one of the most significant places for the Hindu devotees of Lord Shiva. Visitors and tourists are treated with the tallest statue of the Hindu God Shiva in the whole world. This is situated only at a distance of 20 kilometer drive from Nagarkot in the city of Bhaktapur.

The towering statue is seen from afar off over several surrounding villages and the Valley. It measures a whopping height of 143 meters in length. Every week there are several hundreds of visitors to see the statue that was built with great effort as it is on top a hill during the years 2004 – 2011.

This is one of the best places to view the great mountains. of the Himalayas. There is no better view of these world famous mountain ranges other than Nagarkot. Moreover, it is only about 20 kilometers south of Nagarkot and is alongside the Aranio Highway.

It has great picturesque beauty and is one of the places where culture and tradition is well preserved. There are vast green farms, lush fields and also fresh forests that is a treat to the eye whenever you pass by this way. The duration to go for this hike is almost 6 hours. It is a town known as Dhulikel which is a typical Newari region.

The only official and acceptable currency in Nepal is the Nepalese Rupee and there are several ATMs found in Nagarkot. You can exchange foreign currency at the Kathmandu International Airport before you travel elsewhere

The most common food available in Nagarkot is the Nepalese Cuisine as well as Indian Cuisine. Almost every restaurant in Nagarkot serve these foods on their menus. One of the best restaurants in Nagarkot is Cafe du Mont. Many tourists and visitors like this restaurant not only for the food it serves but also mainly due to the panoramic view of the mighty Himalayas.

There is very limited options for shopping in Nagarkot. However, the capital city which is economic is very close and within 30 kilometers from Nagarkot. So, do all the shopping in the Kathmandu city.

However, one shop called Mala Shop is one great place for everything – from gift articles to souvenirs. There is Peacock window to shop for great handmade paper, notebooks, and posters.

Take a step inside the other building which is a paper – making factory and you can see the entire process of handmade paper! So, these are great places to see when you buy stationary or poster from the peacock window in Bhaktapur.

The hilly region of Nagarkot has beautiful and favorable climate in the Spring season. You can find the flora bloom beautifully in the fields and meadows. So, the best time to visit Nagarkot is definitely March & April for best climate. The adventure activities such as paragliding is best for visitors in these seasons.

As summers are hot, it is better not to go during this time due to humidity and difficulty for adventure activities. So, avoid during the months of May to September. During this time there are also heavy showers that makes it difficult to hike / trek. The other months is November to February which is winter but visibility during evenings gets low due to mist, fog, humidity, etc.

Nagarkot is famous for The Best Himalayan View

Remember to make it a point to schedule your trip to Nagarkot between the months of October and December for the best view of Himalayan ranges. If you can take the cold season the dry winter months means lesser cloudiness and humidity. It goes down to even 1 degree Celsius but at sunrise and sunset the best of all 8 ranges are mesmerizing.

How to Reach Nagarkot

As Nagarkot is less than 30 kilometers from the Kathmandu International Airport it can be fast as you can hire taxi / cab from there. This is one of the greatest things as it is situated so close to the capital city of Kathmandu.

Everything from food to accommodation is reasonable and affordable here. Moreover, the best part about this greatest international hill station in Asia is that it takes less time to reach from Kathmandu and is located close by.