Everyone enjoys a good story in general or rather good food in particular. Food is that element at the thought of which your mouth fills with saliva and you want to get your hands on a plateful at the very earliest.

Even though we hardly care to think beyond our taste buds getting a tour of paradise, there actually exists a relationship between the type, taste, and quality of food and the culture of a region. It is the food that binds the region together.

Let us have a look at the wonderful cuisines of Nepal. Whenever someone says Nepal and food the thing that comes first to our mind is momo. The amazing delicacy that is now available almost everywhere you go and there is no end to how many different types of them even exist and there definitely are so many homemade creations having personal mixes with them.

Here are some cuisines of Nepal that are widely recognized: 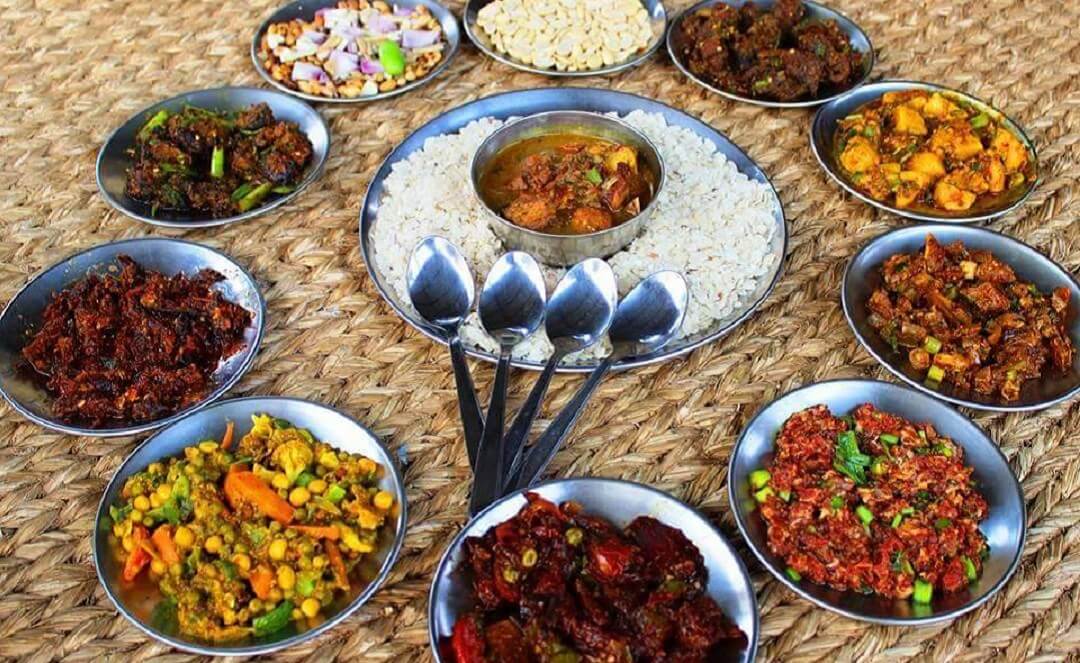 Newari Cuisine is also referred to as Newa cuisine. It originated in Kathmandu Valley. It is the most famous food variety in the country that harbors over 200 dishes. Newari food is considered the best food in the entire country. The cuisine offers non-vegetarian and vegetarian.

The Newars take pride in their culture and hence give it a lot of importance. Feasts and festivals go on throughout the year and each feast corresponds to a few special dishes being the primary dishes that actually are symbolic and hold great meaning for the locals.

The alluvial soil of the Kathmandu Valley is highly fertile which allows an exceptional quality of crops and food to be farmed thus, forming a foundation on its own.

Lohorung people are ethnic native people of eastern Nepal. Their homeland is Sankhuwasabha district in the northern part of the Arun watershed, a tributary to the Koshi.

The most famous item from the Lohorung cuisine is Tongba. The cuisine uses locally available spices and ingredients to make its dishes. The cuisine has spread all over Nepal and even beyond Nepal to Sikkim and Darjeeling.

Tongba is a millet-based alcohol beverage. Millet is fermented and stored in a vessel. Then hot water is poured atop and sipped until the alcohol stops oozing from the millet.

The people of Terai originate in the lowlands of the country. This region experiences high temperatures and humid weather. The lowlands rely on monsoons as their primary source of irrigation. This region is like gold for the people.

There is always a surplus of rice, wheat, sugarcane, and lentils. There is so high productivity in this region such that crops are transported to other parts of the country. Terai region is also called "the food granary of Nepal".

Vegetables are accessible year-round and there is no need to store them for dry seasons. Since vegetables are incredibly cheap and easily available in the Terai, deep-fried vegetable fritters called pakoras are generally eaten. These are crispy fritters that are offered to guests, eaten as a snack or even with meals.

People of Terai have a soft spot for sweet dishes. The curry is very commonly eaten in Terai. Some vegetables that are used to make curry are cauliflower, egg-plant, cabbage, and green beans.

Jalebi, Lalmohan, Rasbari and other sweets items are commonly found in the Terai cuisine

Tibetan cuisine includes culinary traditions and practices and its peoples. The cuisine reflects the Tibetan landscape of mountains and plateaus and includes influences from neighbors.

The most important crop is barley. Flour milled from roasted barley, called tsampa, is the staple food of Tibet is eaten widely throughout Nepal, as well as Sha phaley (meat and cabbage in bread). Nepalese cuisine in the northern region follows a remarkable similarity to Tibetan cuisine.

Thukpa is a dinner staple consisting of vegetables, meat, and noodles of various shapes in broth. Tibetan cuisine is traditionally served with bamboo chopsticks, in contrast to other Himalayan cuisines, which are eaten by hand. Mustard seeds are cultivated and feature heavily in its cuisine.

Some of the most distinguished food items of Tibetan ethnicity are noodles, yak cheese, dumplings (MoMo), Tibetan bread, goat and yak meat dishes. These dishes are all widely eaten and enjoyed all over Nepal in general and the northern region in particular. 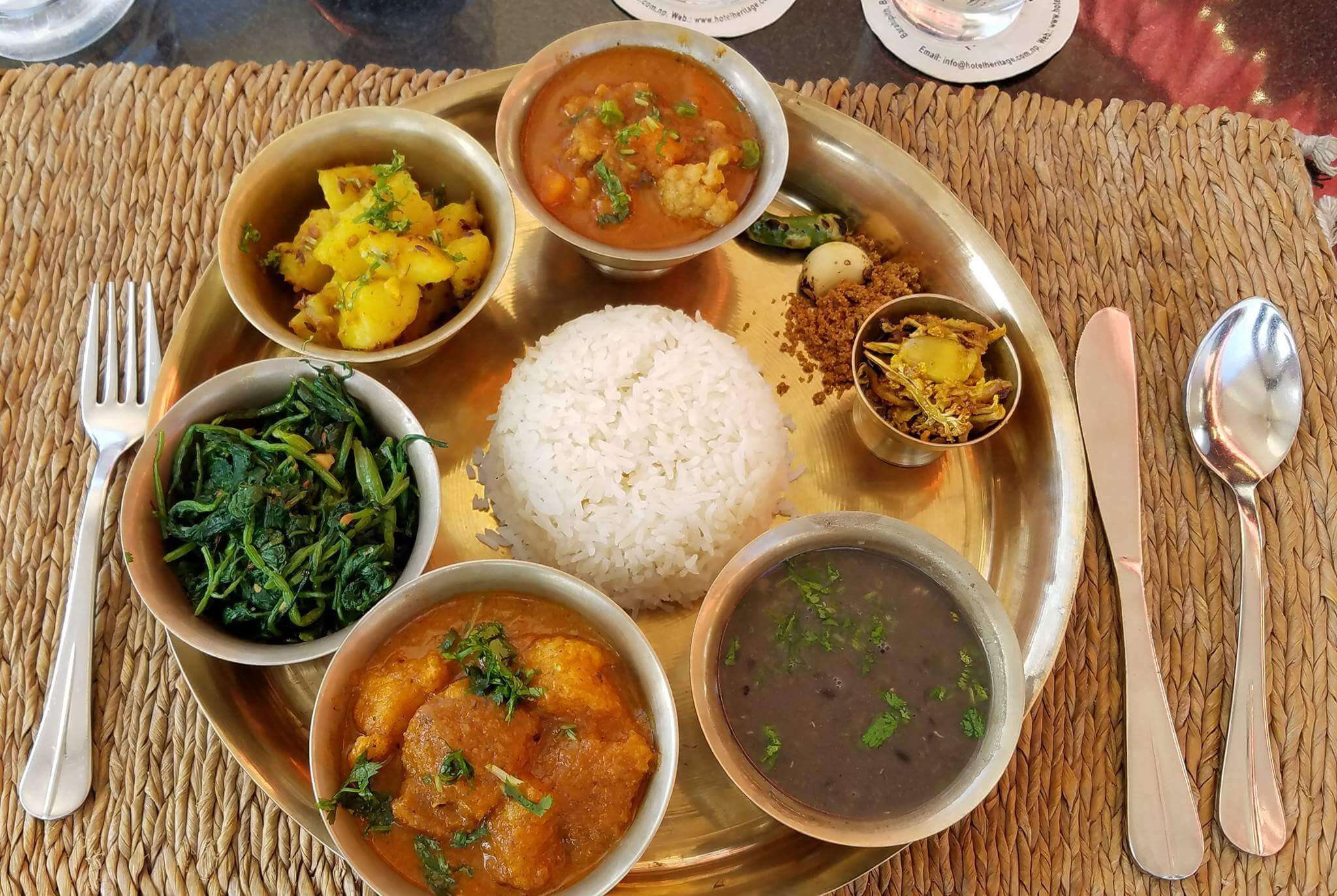 The country of snow capped Himalayas is surrounded by Tibet, India and Nepal, so the cuisine has the flavors and spices influenced by so many different regions. the food is healthy, locally grown, and with side pickled dishes.

The flavoring, aroma, and taste shows the hospitality that welcomes the visitors to the mountainous region.

This Nepali dish is a type of pickled side dish that is generally served alongside the main dishes such as flat bread or rice. Best veggies are picked and then fermented and such type of food generally comes from the cauliflower and radish. This simple dish is also due to the not-so-great farming ability in the snow climate. So, when they grow they are pickled spicy and served with rice or other dishes as a side dish.

This is authentic traditional Nepalese food that is customized according to preference or the seasonal veggies. It is prepared especially during get together of family and friends and also at festival times. It consists mainly of smoked meat with herbs and spices called Choela and beaten rice. Other ingredients includes mustard leaves, lentils pancake called bara, marinated potato, ginge garlic juice and other spices. It is served as a specialty during a special lunch or a celebration.

This is a staple food of the Nepalese people made from lentils and rice. They are boiled and cooked to a soft soopy dal. The bhat means cooked rice and it is flavoured with ginger and garlic, chillies, tomatoes, tamarind, cumin, tamarind, and other herbs and spices.

There is a specific festival known as Yomari Punhi and during this time especially this sweet dumpling dish is prepared. This sweet dumpling is made from steamed rice flour and has a shape that has a particular significance. It is said to resemble the Shadkona that is a symbol of Saraswati Goddess of wisdom. This Nepalese delicacy called Yomari is served as a delicacy during important festivals and particularly the Newar group of people.

This dish that resembles a donut is also a famous road side snack found in several street stalls in many streets across Nepal. This Sel Roti is deep fried in oil are circular in shape similar to a donut. They are especially made during special festivities such as Dashain and Tihar and family celebrations across many Nepali households. It is also made as a breakfast and served along with curd and veggies. Although they are crunchy on the outside they are soft inside.

It is pronounced wah and it is a lentil pancake which is a typical Newari style cooking. The green or black lentils are also ground into a thick batter mixed with egg and sometimes minced chicken to prepare a non-vegetarian form of lentil patties. They are also Bara served traditionally during the Siti Nakha which is a famous Newari festival. This is not only a festival delicacy but is also a healthy and light lunch dish or even a spongy evening snack to beat hunger cramps.

This is an alcoholic beverage with millet which is a traditional drink especially in eastern parts of Nepal. It is popular with the Limbu group of people and is also popularly called Tibetan Hot Beer. It has a unique way of drinking this been from a straw made of bamboo. It is also served in special type of containers. The locals have many rounds of the warm drink to keep warm in the cold weather.

This is one of the top dishes near the Kathmandu, the capital of Nepal and other cold mountainous regions of the country. It is a gravy noodle delicacy that has its origins and influence from regions around like Tibet, and China. It is prepared with meat stock and the smell of it mixed with spices is sure to make you go hungry and want more of it.

Also spelled Chhoyela is a non-vegetarian dish that uses buffalo meat but is now into different meat variations. This spicy tangy hot and yummy dish is served alongside Chura a powdery rice flakes dish. It is served along with the Samai Bhaji dish while these are typical Newari dishes. This makes a must – serve dish during celebrations in Nepal.

This famous street snack of Kathmandu is the one dish that you have to try to get a happy expereince eating the street food in Nepal. These small soft dumplings is a common household snack and street food prepared everywhere.

It has its special chutney dipping and specific spices that makes the Nepali Momo quite different from the momos that you taste and see in the rest of the Asian countries. Every street stall and household would prepare this soft delilcious dumpling snack in their favourite way.