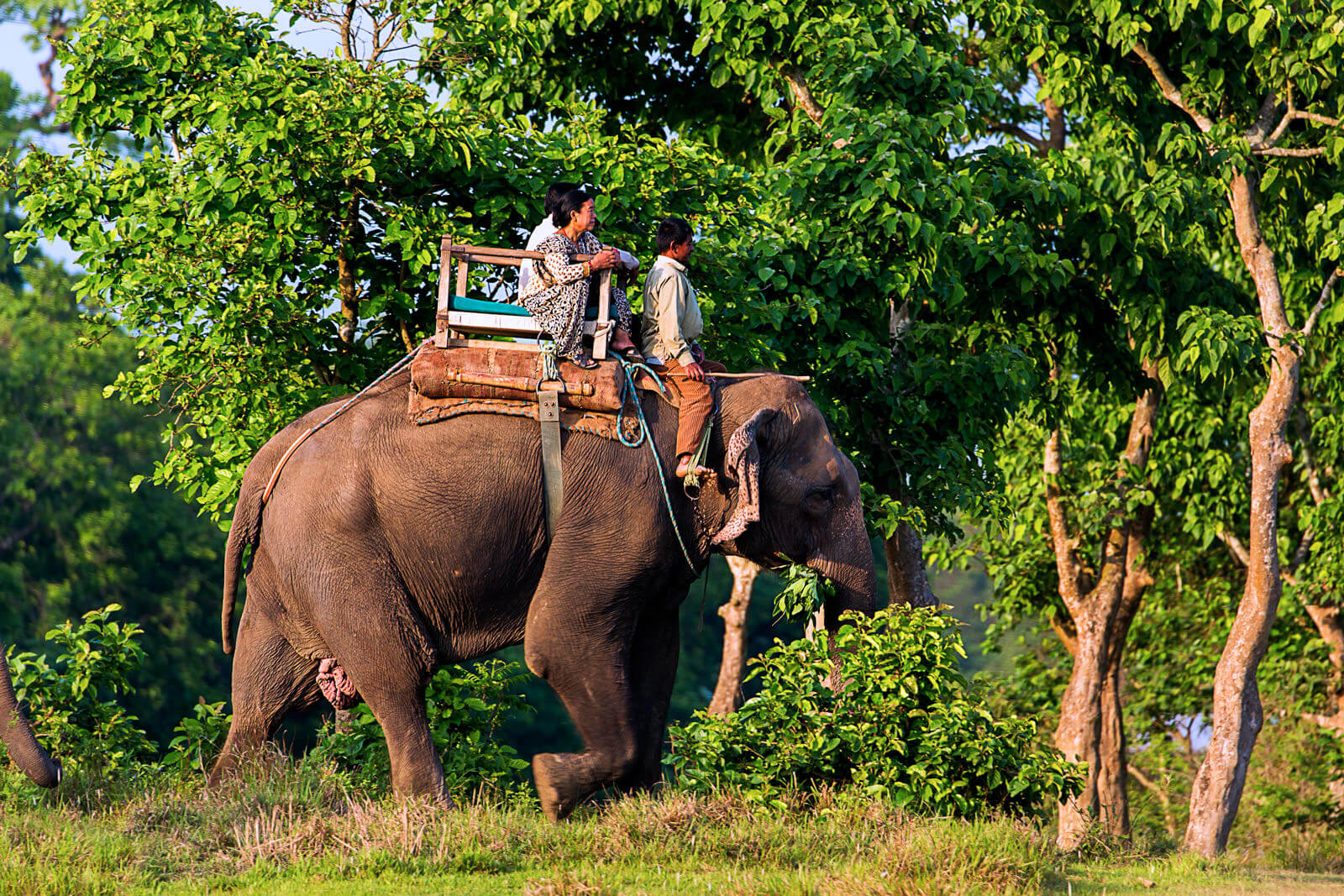 Travelling to watch animals in the national park where hundreds of species and thousands of those animals are protected from hunters can be a great experience.

A national park doesn’t just have animals but much more that them. It is a heaven for all the nature lover as well as those who like to seek adventure and explore new places.

A lot of times people wonder what national park are and what makes them special. There are other questions like are national park safe, is it worth visiting one and several other which include how to visit and how to actually enjoy in National park.

A lot of these questions will be answered as the oldest and biggest National park Chitwan National Park in Nepal will be discussed here. There are a lot of facts about the Chitwan national park that must be known while making a trip to Nepal

A safari in the National park is worth the money as it is one of the best parks in the world which offers a huge variety in animals and some exquisite greenery for the whole year.

About the Chitwan Park

This park is among the few parks that being recognized as well as declared as heritage sites. It lies in the southern part of the Nepal and has Subtropical trees which keeps the place eccentric for whole part of the year.

Things to do in Chitwan National Park

Some of the best thing to do in Chitwan national park and the things it is famous for is trekking, wildlife safaris and boat rides. These are the adventurous activities and have a thrill attached to them.

The wildlife safari is the best way to enjoy the parks exotic and wide range of wildlife. It is one of the best method to cover a large area and explore the jungle on jeeps which provide an open view to enjoy some breathtaking scenes and mesmerizing sounds of various animals.

Trekking can also be done however; it is advised to have a travel insurance as trekking can result in close proximity with some big animals. This activity allows the tourists to look out form some exotic birds and colorful flowers and insects. There are a lot of birds that might be impossible to find anywhere else in the world and the exotic flowers that are usually unheard of.

Boat rides are very common method provided by the locals that can be used to find some amazing fishes and water-based animals like crocodiles. The cannoning boats are very interesting and the distance between the tourist and the fish are less. There are some colorful fishes that increase the beauty of the lakes and the river that belong there.

One of the most amazing treks is the elephant treks as nothing is more fun when compared to ride the giant and most lovely animal. Tourists can ride on the back of the elephants and explore the forest area more safely. These tour lasts for roughly one to one and a half hour while costs just around 1800 – 2400 Nepalis rupee depending upon the duration.

The elephant ride is one of the best way to look for some big animals like rhinos whereas enjoy the beautiful scenery of the jungle. The elephants are not cruelly trained but breaded by following proper guidelines and hence these rides can be taken without any hesitation.

Best way to see a Rhino in Chitwan National Park 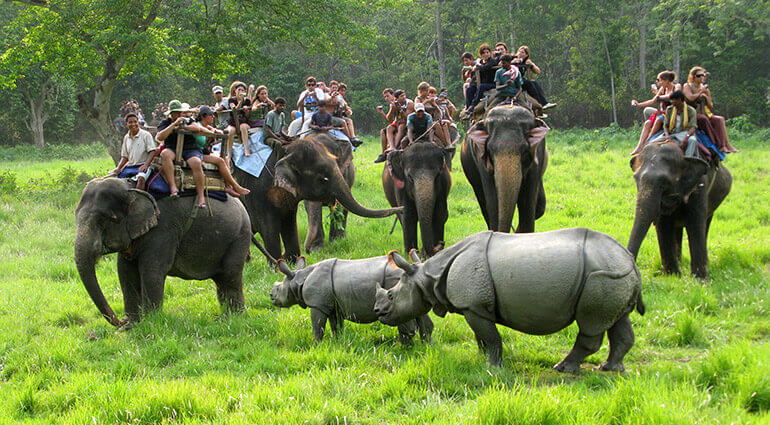 The major purpose of going to trip in Chitwan is to spot some nice animals and among those are the one horned rhinos. These humongous creature can be found in the deep jungle.

The best way to go to these treks are by riding the elephants which costs about 2000 rupees for about an hour. Rhinos are more likely to be seen during the morning time in the water bodies and in deep jungle during the full sun time.

Watching rhinos on the top of an elephant is safer than watching them by foot, as they can charge on humans, they might feel danger from. Also, elephant treks are more amazing and entreating than normal trek.

Best way to see a Tiger in Chitwan National Park 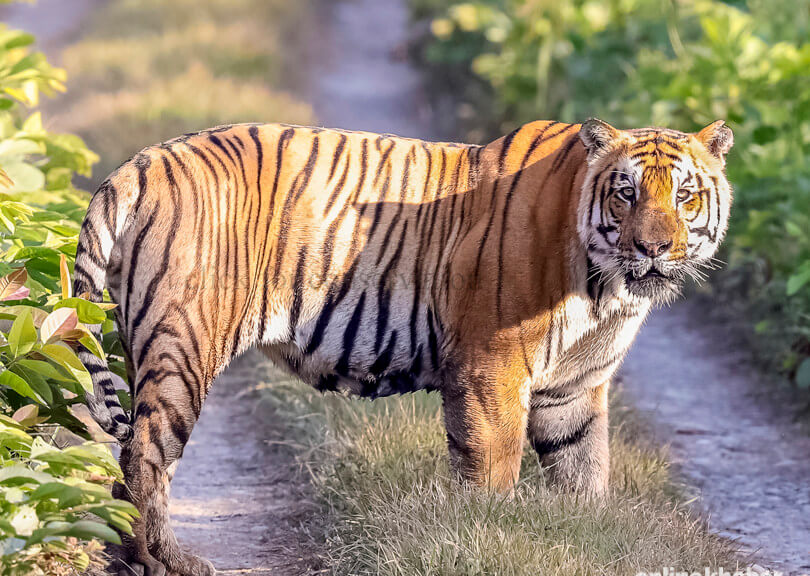 Tigers are one of the hardest animals to find in the jungle of Chitwan and hence they need not just a day trekking but a time period for at least 3 days. There has been growth in the population of the tiger in the recent years but tigers being pride animals don’t let anyone approach them easily and with a wide area they have great deal of places to hide.

A deep jungle safari is needed to increase the chance of spotting the tigers and it usually takes 2 or 3 days, at times even more than that. Tigers are present in the remote area of the jungle and hence the safari can be taken to reach those areas but to spot the tigers, tourists need to search them by foot. Two nights can be easily spent in the jungle and even that doesn’t give a guarantee about spotting the most ferocious animals.

It is also important that tourists need to stay on alert when searching for tiger as tigers are the best hunters in the jungle and can easily outrun most of the animals. It is best advised if a tiger is spotted then a distance should be maintained, and they are not to be disturbed. When a tiger is taking care of cubs or is hungry then tigers can be dangerous.

Chitwan national park is one of the most beautiful forest park in the world to visit and see some endangered and rare animal species. For a foreign national the cost of visiting the park is 2000 Nepalis rupees whereas the cost for the south Asian nationalist is 1000 rupees.

A boat ride in Chitwan national park costs nearly 1400 to 2000 Nepalis rupee depending upon the duration of the boat ride ranging from a full day to half day. Canoes can be rented on the rapti river along with the option of trekking for a day or full. A wide range of birds can be found alongside river and some crocodiles that is a one in a million experience.

A normal jungle trekking costs 1800 for a full day trek for four people whereas the jeep tours cost around 180$ for full day through which some great animals like rhinos and if lucky tigers can also be found.

There are no lodges inside the park and hence tourist should avoid such kind of false statements by individuals or organizations. There are many accommodation places next to the dense park in Sauraha which is also a part of the forest. Rhinos can be spotted from that point as well.

There are numerous guesthouses that price from 10$ a night to 200$. There are few hotels that can be found just outside the jungle.

Restaurants and eating places in Chitwan

While doing all the trekking and the sight-seeing it is important for the tourist to eat well as they could be easily exhausted from all the travelling. There is some famous restaurant like the Jalapeno restaurant, KC restaurant and Friends restaurant.

These restaurants can be easily found and near some prominent places like elephant statue, open gardens etc. and tastes good.

There are some newly opened restaurants and cafes along the riverside area which can provide some nice eating places and a good view of the jungle and sunset. A guide to these eating places can be found in guidebook of Chitwan national park by government.

A travel insurance is always advised before visiting Chitwan as there are a lot of wild animals in the park. It is very important that the instructions given by tour guides and the trekking companies is taken very seriously.

Most of the animals never intentionally kill or harm humans, however, when they are hungry or feel danger they might attack. It is very important that most of the animals should be seen from the distance preferably from elephant treks or jeep treks to avoid any direct contact with the animals.

Each animals react to danger in their own way, some run away, some attack and some hunt. So, it is very important that a knowledge on how to safeguard yourself instructions are listened by the experts properly.

There are few cases in which animals have actually tried to hurt humans and ever fewer when humans did get hurt. But it is in the best interest for the tourist to stay precautious while trekking.

Tips on saving money in Chitwan

A trip is enjoyed best if the money spent on them is reasonable rather than unconventional. There are few ways through which a tourist can save some money and some points where tourist should seek professional help.

Lodgings can be rented upon arrival and tourists are allowed to change their lodgings as per their comfort and the price they like. This can be annoying for the hotels, but it is one of the best methods to save money. Hence, it is more preferred to book the tour upon reaching.

Also, it should be kept in mind that there are lot of guides some which work for certain agencies whereas some work independently. It is more preferred to work with more experienced for which an agency can vouch rather than independent guides as there authenticity is hard to verify.

The visit to park can be one of the best way to look some exotic animals and birds. It is best advised to trek in the Chitwan for at least two days and enjoy the trip properly. The elephant treks are very interesting, and the tourist can visit some elephant breeding spots where elephant population is controlled properly. The baby elephants are some of the most beautiful animals that can ever be seen.