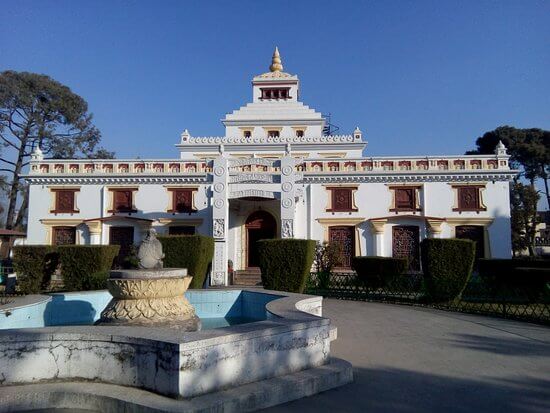 This is one of the greatest museums in Nepal and is a significant symbol of history of the country. The nineteenth century museum in Kathmandu towards Swayambhunath Hill is one of the top museums of Nepal.

Still referred to locally as Chhauni Silkhana, it was established in 1928 and is currently housed in a historical structure constructed by Gen. Bhimsen Thapa.

The historic collections are categorized to three major collections, each placed in different buildings. Over the years the great museum was also significant in upcoming museums of the country and has got a significant part in the archaeological happenings within the country.

Where is National Museum of Nepal Located ?

The National Museum of Nepal is situated at Museum Road, in the capital city of Nepal. This massive museum is one of the top tourist attractions in Nepal situated in the heart of Kathmandu.

The entrance gate is exactly opposite the Nepal Army Military Museum and takes just 15 minutes by walk from Swayambhunath Temple. Otherwise, it is a 25 minutes walk to reach here from Hanuman Dhoka Palace Complex. It is well connected by public and private transport.

History of the National Museum of Nepal

In the year 1938 the museum was open for public viewing and gives a chance to re-visit the historical times. It was then the building for the art museum got its name Juddha Jatiya Kalashala after its founder. Once again, in the year 1967 the popular National Museum of Nepal was renamed Rashtriya Sangralaya.

Many foreign dignitaries, scholars from around the world, and Rana Prime Minister’s guests visited the art museum occasionally. Even the Japanese Government visited 1995 and made a donation to exhibit Buddhist Religious Art. This further helped in Buddhism research and studies by holding exhibition of great art and artifacts preserved through history.

What type of findings are there in the Museum ?

Many pieces of art and artifacts that share the history and culture at various times of Nepal. There is a collection of BC coins, preserved relics of Nepal earthquake during 1934, stuffed animals, collection of dolls that were gifts to royal women, and the weaponry.

One of the prime pieces of such historical weapons is the leather cannon pertaining to Tibetan war period of 1792. Other collection of weaponry showcase the changes in Nepali weaponry at various time periods.

How many sections are there in the museum ?

Roughly a century old, the splendid museum that showcases the history and culture of Nepal over the generations through various relics, artifacts, images, craft, etc. It comprises of three major buildings

From the three buildings this is the oldest and was the home of Gen. Bhimsen Thapa. There are life-sized paintings on the walls of the building of different rulers from Malla dynasty and Shah dynasty till the Prime Ministers of the country. It is within this building that you can find the leather cannons of 1972 Nepal – Tibet War. Inside this great structure there are three galleries and also a museum.

The Hall of Sculpture attracts many visitors who are interested in culture. The Juddha Jayatiya Kala Shala is a gallery full of ancient wood carvings, ornate metal works, and also stone carvings including huge images that stand inside the museum.

There are also sculptures of Gods such as dancing Ganesha, and Lord Brahma in addition to the unique sculptures of Uma and Maheshwara. There are various galleries in the Hall of Sculpture

One of the most prominent of such stone carved structures is the Licchavi King Jayavarma from the second century. There are sculptures of

A beautifully ornate section of wooden carvings includes such art work done on rosewood, salwood, teak wood, and even on window frames showcasing the intricate and complex skill of artists.

There are life-sized images done into the various walls of the museum.

There is another section that consists of paintings. There are mystical doings of Lord Krishna, so these scenes are depicted in the paintings section that is called ‘Krishna – Leela’.

The National Museum of Nepal also has another fascinating section which is called Doll Gallery. This comprises of a plethora of dolls from all around the globe. These doll collection artifacts were gifted by the different dignitaries and Head of States of foreign countries over the several years to the women in royalty.

What are the Timings of the National Museum of Nepal?

The National Museum of Nepal is open for visitors from 9 am to 5 pm. The museum remains closed on all public holidays and every Sunday & Monday of the week.