Top Monuments and Historical places in and around Agra

Without doubt, Agra is a prime attraction because of the historic sites and monuments left by the Mughals and other great empires of the past. Agra is the garden of marbles and sandstone’s, which expresses love, romance and loyalty.

No, Taj Mahal is not the only iconic attraction of the land. The entire region is filled with exceptional architectural beauty and this article pays importance to all unique monuments in and around Agra.

Taj Mahal or the Crow of Palace was built in 17th century with marble, as a mausoleum for Shah Jahan’s favorite wife, Mumtaz Mahal. Taj Mahal includes the cemetery, museum, guesthouse, formal garden and fortified walls. This world heritage site is the icon of Mughal architecture and is one of the Seven Wonders of the World. It receives around 7-8 million tourists every year. Are you willing to cover Taj Mahal as the main attraction of your vacation? Visttnt has got your vacation covered. 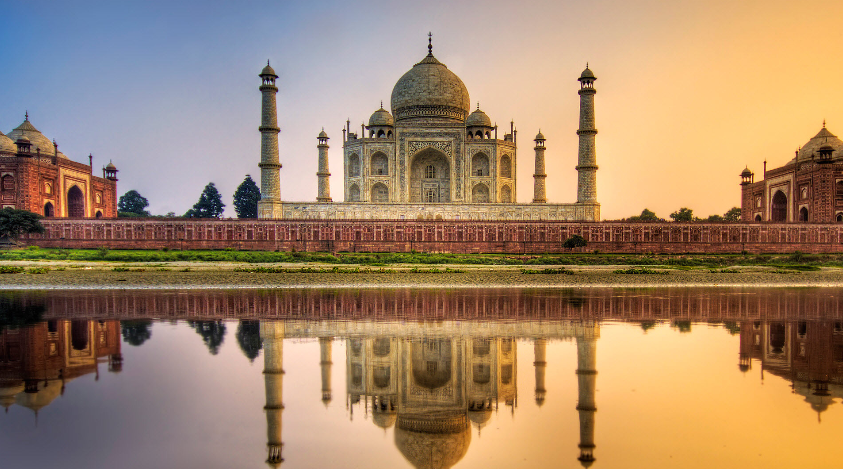 The structure is built in ancient Persian and Mughal architecture. The inspiration came from a series of structures including Gur-e-Amir, Jama Masjid, Itmad-Ud-Daulah Tomb and others. The structure was built with white marbles and decorated with semi-precious stones.

The main element of Taj Mahal is the tomb, which consist of arch doorway and symmetrical buildings. The main chamber of the structure holds false sarcophagi of Shah Jahan and his wife. The original grave is located exact under the fake one, in an underground chamber, which is closed to tourists. The minarets are around 40 feet tall and the top of the tower holds a balcony to get a panoramic view. The inner dome have inscriptions from Quran and you can find incised paintings, geometric patterns, carvings of flowers, fruits and others.

The East and the West Gate of the complex is open from sunrise to sunset. The South Gate opens at 8 in the morning and closes by 5 in the evening. The complex is closed on Fridays, except for those who visit the mosque for praying.

Located in a small town of Uttar Pradesh, the Fatehpur Sikri was built as a capital in 16th century by Akbar. After a decade or so, the emperor abandoned the new capital due to lack of water. This capital village gets its name from the village, which was present before the capital was built, Sikri. It is also said that his son, Jahangir was born in this village. 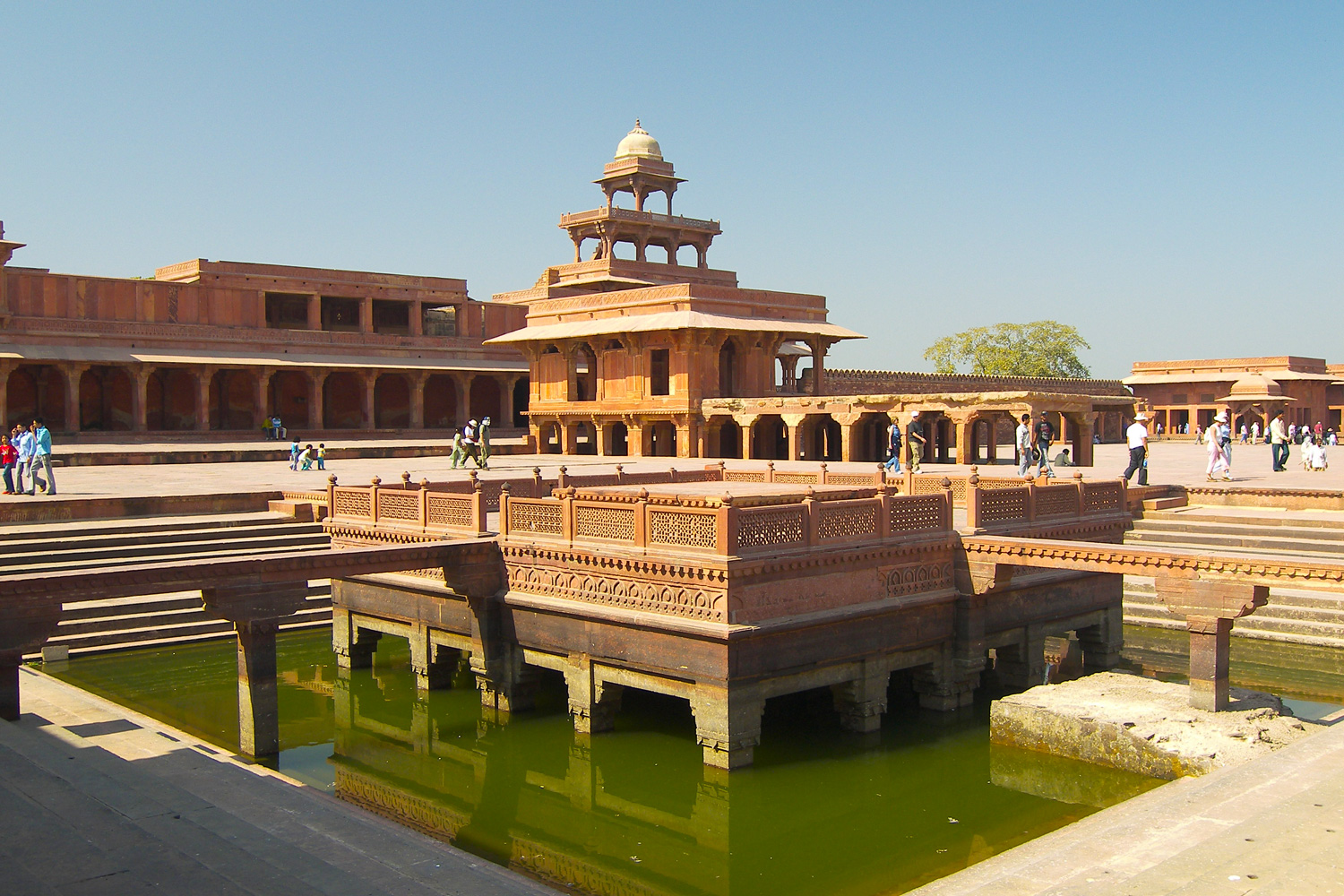 This capital city is 3 km in length and is covered by fortified walls on three sides and a freshwater lake on one side. The lake was considered to be the main water source of the land. After many years, the lake started to decline and with no rain to support the region, the land became a desert. With hostile armies from surrounding regions threatening to attack the already weakened city, Akbar abandoned the city. The capital was built with gardens and structures for services and luxury facilities. The city was built with Hindu and Muslim styled architecture. The city could be accessed via nine gates in the fort wall. The best way to cover Fatehpur Sikri is via luxury trains. If you are choosing to visit Agra with luxury trains, visit for more details about Luxury Train Tour India

The capital is open from sunrise to sunset.

The complex is closed on Fridays.

This is a historic fort of the region and the second most important structure among tourists after Taj Mahal. Built in 17th century, this fort was used as the prime royal residence by Mughal emperors. It is more of a walled city than a mere fort. This heritage site belonged to Lodhi Dynasty before Mughal took over. After the fall of Mughals, Maratha emperor took over the fort and later handed over it to British government. Do you want to know more details about Agra Red Fort?

This fort covers 94 acres of land, in a semicircular shaped layout. The borders are parallel to the river and it holds four gates, one on each side. The most notable gates of the fort are the Delhi Gate and Lahore Gate. The Delhi gate is famous for statues and carvings and was used to welcome kings after victory. Delhi Gate is not open to tourists.

Open from sunrise to sunset, throughout the week

Jama Masjid is the name given to numerous mosques built during Mughal regions. This Jama Masjid is located in Agra, right opposite to the Agra Fort. Jama Masjid is translated as Friday Mosque and it is one of the largest Islamic religious structures of the country. Do you want to cover Agra in a couple of days or just one day? 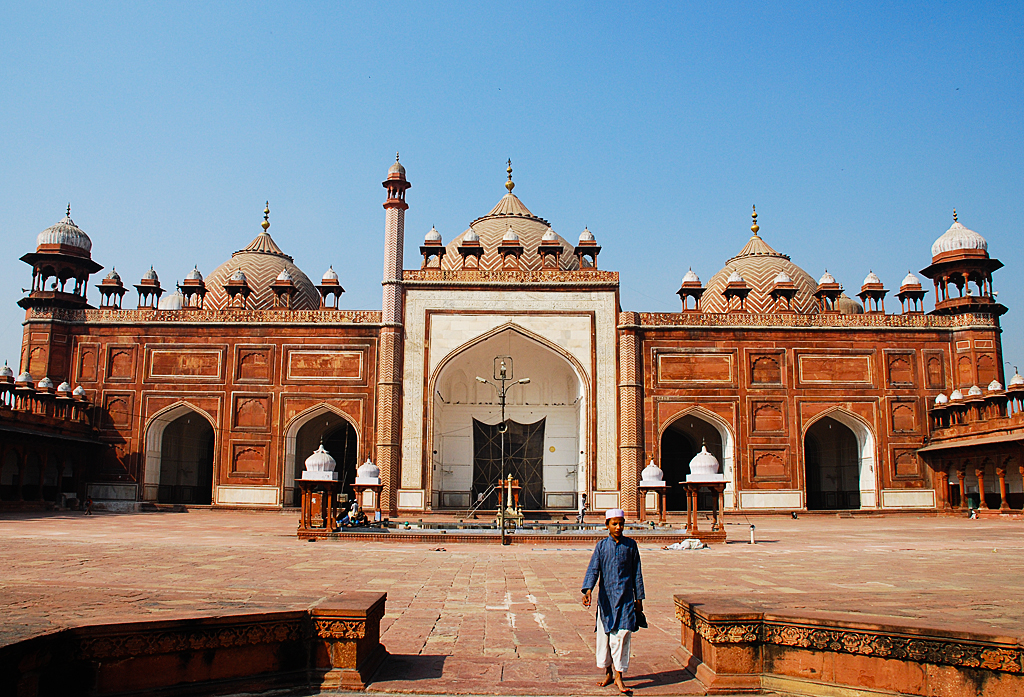 This mosque was built in Shah Jahan in 17th century. The mosque was dedicated to his favorite daughter, Jahanara. It is said the Tripolia Chowk was destroyed to make space for the mosque. The main entrance of the mosque is located on the eastern side, which leads to the prayer chambers.

Akbar’s tomb is the resting place of Akbar, the Great. This 17th century structure was built in an area covering 119 acres of land in Sikandra region. The tomb was massively destroyed during the reign of Aurangzeb by invaders. Later, British government reconstructed the tomb to the current structure. 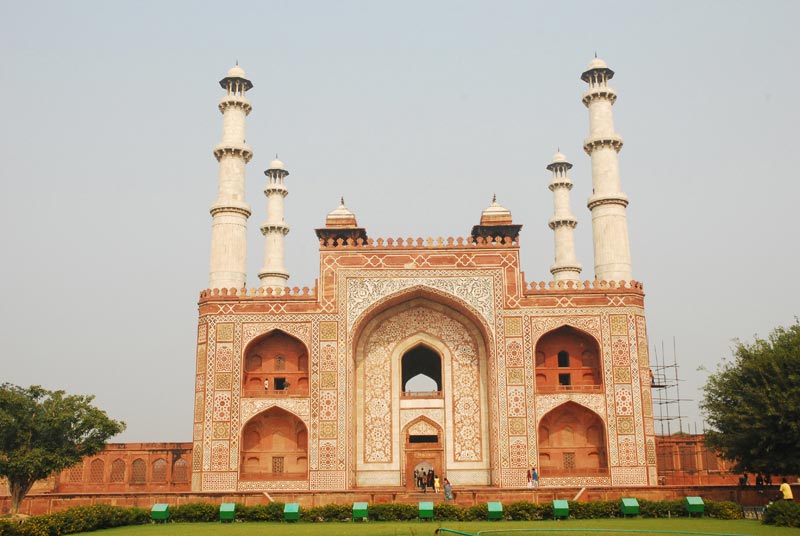 The tomb was built by Jahangir, son of Akbar. It is said that Akbar, himself chose the place for his burial. After his death, his son started the construction. Many years later, Jats ransacked the region, looted all the beautiful carpets, decorative structures and others. Later, the Jat king dragged the bones of Akbar from the tomb and burned the remains.

Open from sunrise to sunset, throughout the week

This is yet another mausoleum of Mughal reign, which is also called as the Baby Taj. This structure was built in 17th century with marbles and sandstone’s. The structure was built by Nur Jahan, wife of Jahangir, for her father, Mirza Ghuas Beg. It is said that Shah Jahan wanted to build something more beautiful and stunning that would overshadow the beauty of this structure and, thus built the Taj Mahal. 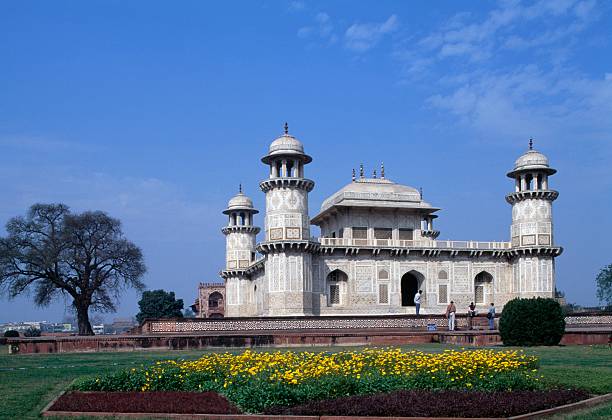 Although commissioned for Mirza Ghiyas Beg, many of his relatives were also buried in this structure. Due to the lack of tourists and ignorance of importance to the intricate designs, the structure is rumbling to dust. Soon, the delicate designs will be destroyed to wear and tear. Thus, it is better to visit this structure as soon and possible.

Open on all days from sunrise to sunset

Are you just spending less than a day in Agra? You can still cover all these heritage sites, with the itinerary proposed by read article: How to Spend a Day in Agra – Ideas and Itineraries.

Must read some itineraries: