Indian currency is available is various denominations. Some are in the form of notes whereas some in coins. Indian currency notes are always known for its monumental and architecture images printed on the back. The Reason why RBI prints this monuments behind the currency notes is to display country's culture which reflects nations rich diversity and proud achievements.

The tradition of printing this type of monuments and achievements behind currency notes are followed from the beginning. Rs. 1 note had pictures from world war 1 of history. Along with monuments, pictures depicting big achievements are also printed. Picture of Mangalyaan is printed behind the denomination of Rs.2000.

The demonetisation of 2016 turned the currency notes of Rs.1000 into scrap. After that, new currency of Rs.2000 was introduced. This architectural prints of India's best monuments always stand as the proof of India's rich heritage and shows the world about national achievements.

Some of this Top Historical Monuments Printed on Currency Notes are 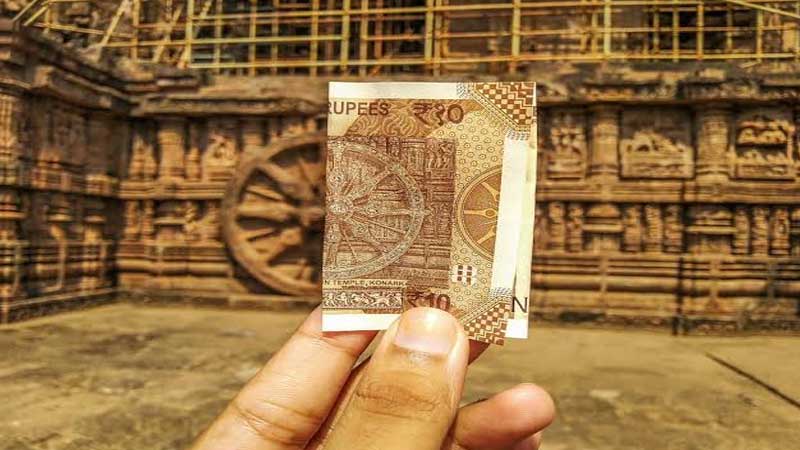 The new series of currency for Rs 10 was introduced on 5th January, 2018 by RBI. Just like the old one, front side shows the picture of Mahatma Gandhi.

Whereas on the back side, you can see Konark Sun Temple of Odisha. This banknote is of brown color. This sun temple was constructed in 13th century. It was built by king Narasimhadeva I and is also known as Surya's chariot.

This temple is India's one of the tallest temple till date. Besides this, it is also a part of Golden Triangle of Odisha along with Puri and Bhubaneshwar. It is also considered as pilgrimage center. The design carved on the temple is not just designs but carry deep meanings too. The architecture shows a chariot that is pulled by Surya’s seven horses.

This seven horses depicts seven days of the week. Apart from this, chariot have 12 pairs of wheels which shows 12 months of the year and have 24 wheels which means 24 hours of the day. This masterpiece of arithmetic equation is recognised by UNESCO as World Heritage Site in 1984. 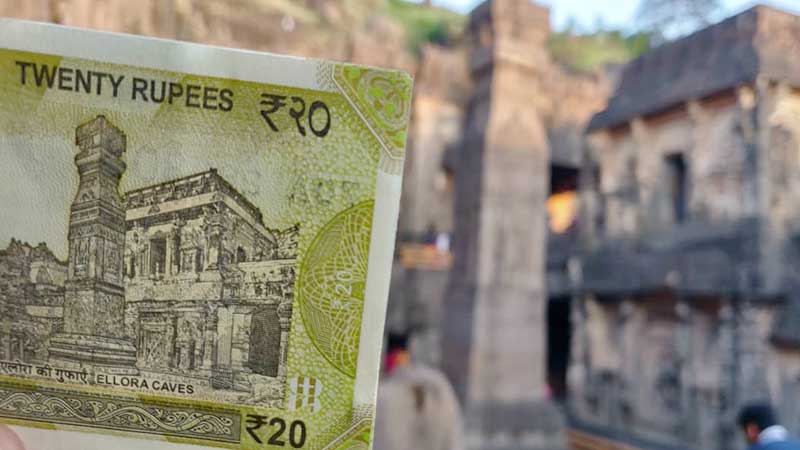 The currency of Rs. 20 is the recent change by RBI.

The colour of the banknote is changed to florescent green type from pinkish red. Earlier there was a picture of beach from port blair printed on the reverse side. But now, the new series have Ellora caves printed on the back.

The currency was announced in April 2019. These Ellora Caves are located in Aurangabad district of Maharashtra.

There are over 100 caves at this side and are said to be constructed between 600-1000 CE period. This monuments features Buddhists, Hindu and Jain artwork. This picture on the banknotes shows the country's cultural heritage right from ancient period.

Ellora caves were declared and were listed in World Heritage Site by UNESCO. 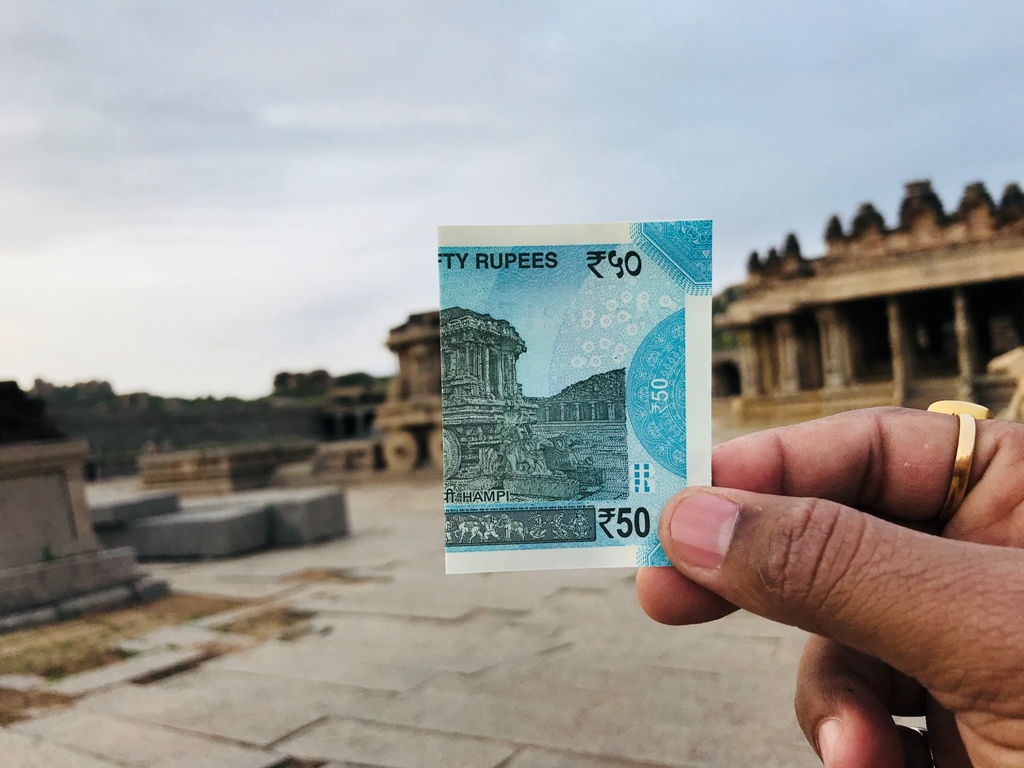 The new currency of Rs.50 was released on 18 August, 2017. Earlier , the bank note had picture of Sansad Bhavan or we can say Parliament printed on its back and was of purple type shade.

The new currency is of florescent blue shade. This banknote too have a picture of chariot temple like Rs.10 currency. This chariot temple is from Hampi, Karnataka.

This fine design us a Garuda shrine in the form of Krishna built in Vithala temple complex. Hindu mythology mentions Garuda as Vishnu's Vahan.

This beautiful structure was built between 14th to 16th century under the reign of Vijayanagar Empire. This temple was also mentioned in UNESCO's list of World Heritage Site in 1986. 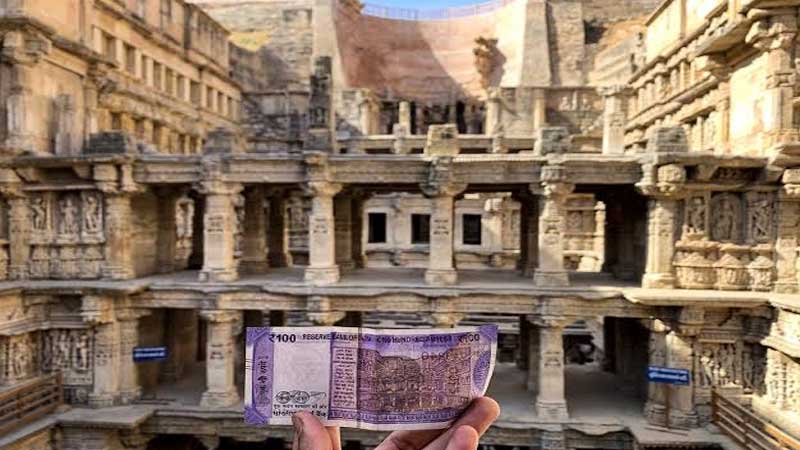 The old notes of 100 rupees had Mount Kanchenjunga printed towards its back. Whereas the new currency has Rani ki Vav on the reverse side. Rani ki Vav is a stepwell located in patan, Gujarat.

This stunning structure was constructed in 11th century by Solanki Queen Udayamati. Queen Udayamati built this structure as token of love and memory dedicated to her husband, King Bhimadeva.

This stepwell has number of Parvati and Gauri sculptures which represents the widow queens and resembles the presence with their husbands in some other region. Apart from this there are above 700 mythological sculptures and figures.

Rani ki Vav is also listed as World Heritage Site by UNESCO in 2014.

Earlier there was no currency with denomination of Rs.200. This Orange colored currency worth Rs.200 was first introduced in August 2017.

This was constructed in around 2nd century BC. This monument was constructed by Emperor Ashoka and is said to he the oldest Buddhist sanctuary. Until 12th century, this place stood as Major Buddhist Center of India.

This site has beautifully carved torans and is specially known for them. One of this torans is also featured on banknote. The intricate designs carved on this torans show tales of Buddha's life and are usually known as Jataka tales. Sanchi stupa was declared as World Heritage Site by UNESCO in 1989. 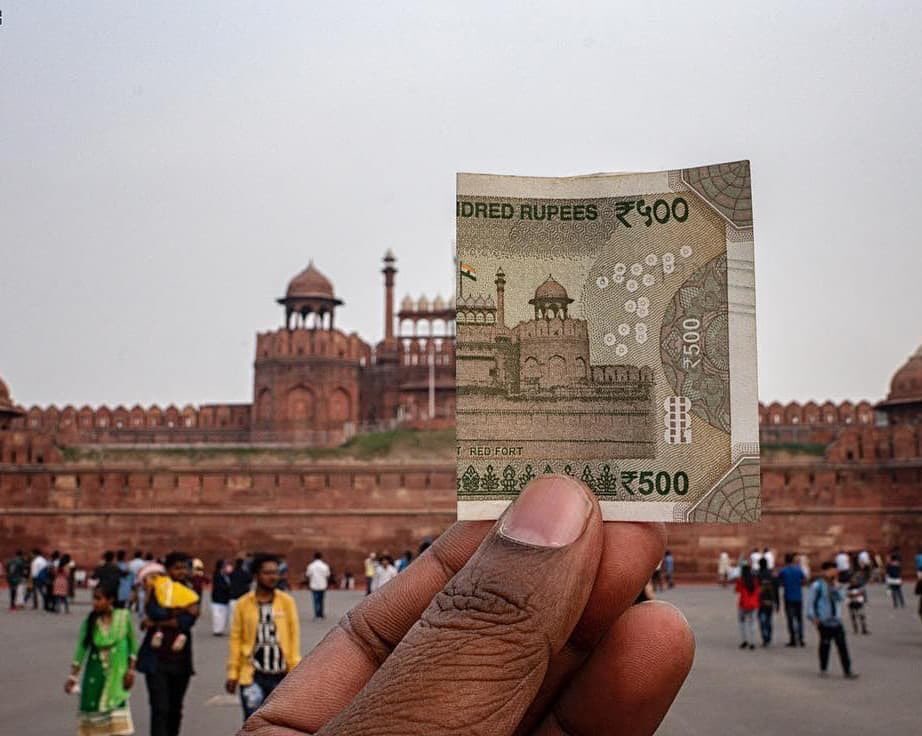 The Denomination of 500 was totally taken back in November 2016 by Prime Minister. A new currency of Rs.500 was introduced in a new design. The new currency featured parts of Red Fort, Delhi.

There's a picture of national flag with Red fort on the note. This structure was built in 17th century.

For almost 200 years, Mughal emperor had control on it. Red fort was originally known as 'Qila-i-mubarak', or Blessed Fort. This is the platform where the flag is hoisted by nation's Prime Minister on Independence day. Red Fort is also listed in UNESCO's World Heritage Site.

There may not be any country without its currency. Currencies are considered as the pride of nation. This monuments printed on the reverse side of currency shows the treasure owned by nation.

This depicts the precious heritage, beautiful sculpture and intricate designs built number of years ago. These old buildings stands as the pride of nation in front of the world.