Mount Everest – the highest mountain on earth at nearly 8848 meters above the sea level. It was formed by the pushing up of force by the collision of the two tectonic plates of India and Eurasia.

There are hundreds of climbers every year to this iconic mountain estimated to be around 50 – 60 million years in age. Every year with the hundreds of aspiring climbers and successful climbers there are many tales of it too.

Here are the Interesting and Unknown Facts about the World’s highest mountain – Mount Everest. 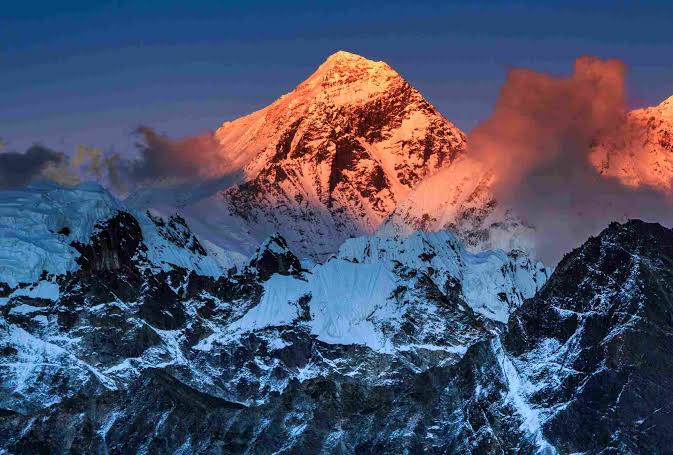 Have you ever wanted to be on the top of the world? If you have felt this way at least once in your life then there is a place – Mt. Everest. Seriously, This mountain peak marks the highest point on land in the whole earth!

There are many mountaineers who have successfully summated this great mountain and a couple even completed a wedding ritual up there!

There are several interesting facts about the Mount Everest that will shock you. So, if you would like to know about this highest mountain and what’s happening there then this is just for you.

Mount Everest is the highest peak in the world even though there are different measures given at various markings. In the year 1865 the Royal Geographical Society provided the official name of Mt. Everest.

The British Surveyor General of India Andrew Waugh recommended the name despite objections by Sir George Everest who the mountain was named after. There are 3 countries sharing this huge mountain and each have a traditional name for it. In Sanskrit or Nepali it is known as Mt. Sangamatra whereas in Tibetan it is called Mt. Chomolungma or Qomolangma Feng and Chinese call it Zhumulangma Feng.

Do you think if life can exist at this altitude and freezing temperatures? Do you find plants and animals, humans? Read on.

It is a very interesting and eco system with limited flora and fauna growing or living in that height in freezing temperatures. One of the most famous plants of the snow region is the Arenaria which is an alpine cushion plant but it grows below the 18,000 feet in the snowy region. However over 2 decades it is now found that plants are growing in some areas where there were no vegetation. However at heights of 21,260 + feet there is moss growing but not above this height.

If you are thinking that the Himalayas and Mount Everest is all about snow and mountaineering then think about this. There is a Rongbuk Monastery which is of course at the base of the north western side of the Mt. Everest. However, this is respected as the holy sacred threshold of the Mt. Everest. Moreover, this place gives the most spectacular views of the world.

There is also life of human beings with the Sherpa people of Nepal that are especially from the Khumbu region who live on the slopes of the tallest peak in the world – Mt. Everest. You can come across many human beings trying to climb up with their heavy backpacks and professional guides too helping them our. The waste products, oxygen tanks, cans, food is thrown and not to mention the tons of human excreta that is polluting the mountain up there.

Finally, there is not only life that happens up Mt. Everest but also death. It is recorded that 300 climbers have lost their lives trying to summit the highest peak in the world. Their bodies are scattered, buried, some fallen in crevices, etc. So, this makes Mt. Everest also the highest graveyard in the world!

Q. How do you pronounce Mount Everest?

This is how Mount Everest (pronounced Eve+Rest) and is generally pronounced (Ever+Rest) by many.

Sir George Everest discovered this as the tallest mountain. He served as a Surveyor General of India 1830 – 1843. Earlier, surveyor and mathematician Radhanath Sikdar identified the obscure Peak XV.

Q. Where is Mount Everest Located?

The Mount Everest summit is on the border of the country Nepal (towards south) and Tibet (toward north). The mountain is situated on Nepal – China border.

Q. How many successful mountain climbers?

There are nearly 4,000 or more climbers till present. With gadgets and technology, discovering new routes, and commercial trips, the number of mountaineers and climbers is rising.

Q. Which climber has climbed Mount Everest most times?

Apa Sherpa & Phurba Tashi Sherpa from the Sherpa tribe have achieved the top number of climbing Everest. They both successfully climbed 21 times!

Q. How do they call Mount Everest in Nepal & Tibet?

Q. When was the first Mount Everest successful climb by Whom?

The first successful summit was done by Sir Edmund Hillary and Tenzing Norgay in the year 1953.

Q. Who holds the record for oldest and youngest climbers?

An 80 year old Japanese man called Yuichiro Miura successfully climbed in the year 2013. The youngest is Jorden Romero who climbed Mount Everest in the year 2010 at the age of 13 years.

Q. Who was the first disabled climber of Mount Everest?

Q. Who was the first female disabled climber of Mount Everest?

Arunima Sinha, a national level sportsperson who lost her leg in a train incident successfully climbed seven summits of different continents including the Mount Everest.

Q. Which Couple got Married on top of Mount Everest?

In the year 2005 Nepalese man and woman married on their successful summit of Mount Everest which makes them the first couple to get married on the highest mountain in the world. It was a 10 minutes ceremony on top of it. They kept the secret till they successfully reached the top.

Q. What type of living creatures live up there?

Euopnrys Omnisuperstes is the scientific name for the jumping spiders in the Himalayas residing at a height of nearly 6700 meters above sea level in the Himalayan ranges. Other species of grasshoppers were gathered in 1924, the first British Everest expedition.

Due to extreme freezing temperatures, climbers suffer from snow blindness, suffocation, and even starvation, frostbite and hypothermia and some climbers even die on their summit attempts.

Q. What is known as “Mount Everest Death Zone”?

At an elevation of 7500 m the region from there up is known as Death Zone due to the deaths because of snow diseases. Doctors check on mountain climbers are available at a height of 5400 m or below.

Q. How do they move dead climbers?

Mountain climbers also come across dead bodies sometimes on their Mount Everest summit. There are around 200 dead bodies and they cannot be brought down as it is dangerous in poor climate.

Q. What is the Maximum Temperature on top of the mountain?

A surprising fact is that the max temperature up the mountain has not gone more than 20 degrees. This is the hottest that it can get on the snow filled tallest mountain.

Q. Is there oxygen at the top of Mount Everest?

There is very little amount of oxygen which makes it difficult for people to breath and they suffocate. Climbers carry the oxygen tanks up there as the oxygen present is lesser than 1/3 of oxygen at sea level.

Q. Is there high speed internet on Mount Everest?

As the hiker used 3G from the top of the mountain after reaching there, he tweeted: “Everest summit no 9! 1st tweet from the top of the world thanks to a weak 3G signal and the awesome Samsung Galaxy S2 handset! @samsunguk”. However, while going up the Everest there is high speed internet.

Q. Can there be a traffic jam while climbing up Mount Everest?

Yes, its’ surpirsing! But there is this picture captured by a mountaineer here. It shows the number of people in the lengthy queue for the summit of Mount Everest in what looks like a ‘traffic jam of climbers’ that was clicked in the year 2012.

Q. What is the exact measurement height of Mount Everest?

This is still in dispute as there are different measurements coming. Some say it measures 29016 feet or 8844 meters above sea level whereas others say its height measures 29029 feet or 8848 meters.

Q. What is the wind speed and climate like up there?

It is freezing cold and people get frostbites too. The speed of winds on this mountain goes up to 200 mph. This is the type of wind speed that blows at storms, typhoons etc. on ground level.

Yes, people have even died during these avalanches which is a flowing down force of ice, snow and smaller rocks down the mountain.

Q. What is known as the 'Maiden Year of Mount Everest'?

1974 is considered as the maiden year for a strange reason – Nobody attempted the Mount Everest summit during this year!

Q. How does the Mount Everest grow tall every year?

Scientists have found that there is an increase in the height when compared to years before. So, it means the mountain is growing or an northward movement of the rock on which Mount Everest stands.

Q. How many attempts were made to climb Mount Everest?

It is estimated 4000 people have tried to climb the highest mountain in the world and 800 people include the guides, Sherpas, professionals, etc.