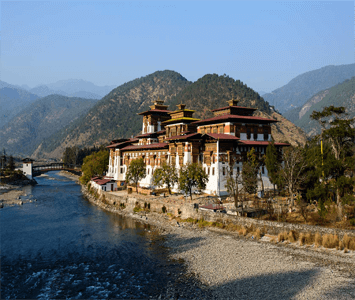 If you are seeking peace and have a keen desire to experience spirituality, then go for a Bhutan Monastery Tour. This 9 days customized tour of Bhutan Monasteries will take you through the silent valleys of Paro, Thimphu, Trongsa, Bumthang and Punakha.
Besides visiting the monasteries, you can capture the scenic views of the highest glacial peaks of the world. The hills with lush greenery and a silvery river Pa Chu will add charm to your tailor-made tour of Bhutan.

Thimphu being the capital city of Bhutan, offers a lot for sightseeing. To know about the Buddhist texts and manuscripts you will visit the National Library. Also visit the Textile & Folk Heritage Museum through this 9 days tour.
During this private tour of Bhutan, The highest peak- Gangkar puensum can also be seen while traversing to Wangduephodrang town. Observe the enchanting prayer flags while crossing Pele-la pass.
The carefully tailored tour of Monasteries in Bhutan, offers you more than just visiting the monasteries. We help you to know the culture and heritage as well by introducing you to the antique thangkha paintings, textiles, natural and historic artifacts of the country. Overall, you will have an excellent vacation of 9 days in Bhutan.