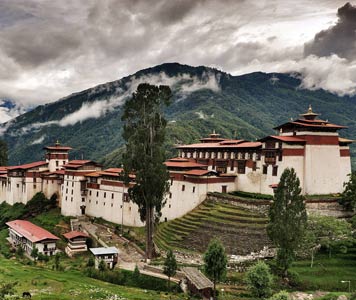 To get the best of Bhutan, take a 7 Days tour of this holy nation. This personalized tour will cover the major destinations of Bhutan like Paro, Punakha, Wangduephodrang, Thimphu and Phuentsholing. You will be able to visit the enchanting tourist spots through this tour of Bhutan in just seven days.
Visit the well known pilgrimage site- the Taktsang Monastery and the National Museum- Ta Dzong (which display Bhutanese postage stamps, art & artifacts and weapons). Besides, you will visit the ruins of Drukgyel Dzong and Kyichu Lhakhang.

The customized tour will also take you to Punakha crossing Dochula pass with the elevation of 3,080m and Wangduephodrang. Travel around Thimphu, which is not only famous for its museum but also for its streets and shops, reflecting the tradition of the Bhutan.
Bhutan's National Library, The Textile and Folk Heritage Museum will keep you busy during your private tour to Bhutan. A visit to the Memorial Chhorten and Handicrafts Emporium will help you observe and admire the traditional handicrafts & arts in Bhutan.
Visit Kharbandi Goemba, a popular monastery housing remarkable statues of Guru Rinpoche, Sakyamuni and Shabdrung Ngawang Namgyal before you are all set for an exciting drive to Phuentsholing via Simtokha Dzong.
This is how we plan an exciting 7 days Bhutan tour for you so that you can have a pleasant vacation. Get inclusions and exclusions done as per your interest.