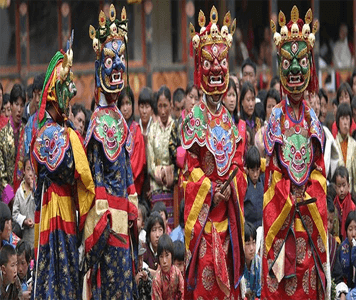 Explore the rich culture of Bhutan by choosing this 6 days cultural tour. This personalized tour of Bhutan will cover some major destinations like Thimphu, Punakha, Paro giving you the best sights of Bhutan.
Through this Bhutan tour you will be able to visit the Chief Abbot of Je Khenpo (the Chief Monastic Body of Bhutan). It is the summer residence of Je Khenpo. The trip will include a visit to National Library located in Thimphu (having huge collection of Buddhist texts and manuscripts of ancient time).

Visiting the Handicrafts Emporium will let you admire the intricate traditional crafts of Bhutan. This tailored tour will then proceed towards the famous stupa, Memorial Chorten. You will get the amazing view of flurrying prayer flags, adorning the highest point on the road.
An adventurous visit to Dochula pass with an elevation of 3080 m, will keep you thrilled. From there you can also get the glimpses of Masagang, Tsendagang, Terigang, Jejegangphugang, Kangphugang and Zongphugang if the weather remains clear. Besides, you can visit the highest peak of Bhutan, Gangkar puensum with the height of 7,497m.
Therefore, we assure you that your private tour of Bhutan will leave an unforgettable impact on you!