Delhi is one of the most visited puts in India and witness a huge number of travelers from different places of India just as the entire world all the time. There is a noteworthiness significance about the city that is heart to the India.

There is incredible arrangement of spots that can be visited in Delhi, however there can be inquiries as a primary concern of the individuals visiting Delhi like what the well-known vacation destinations are, the place can a traveler visit in Delhi and what are the pioneer locales in Delhi.

Delhi too has some of the most wonderful and magical temples that captivates the attention of tourists beautifully. Every temple has its own charm and a vibe that makes them so different from the other tourist attractions. The hustle in our lives never really lets us breathe in peace but the calmness that temples enclose within themselves provides the ultimate solace.

Delhi being one of the most visited cities of India accommodates the best tourist spots which includes the beautiful temples and other places of worship. These include Akshardham temple, Lotus temple, Hanuman mandir and many more that very gracefully hold the richness of Indian traditions high.

The popularity of these temples is so widespread that every citizen who knows even a little about our tourism sector would definitely consider visiting them.

Akshardham Temple has gained a worldwide popularity as it holds a record in the Guinness Book of World Records for being ‘World’s largest Comprehensive Hindu Temple’.

The area in Delhi where this temple is located has been named Akshardham itself. It was inaugurated by Dr. Abdul Kalam and is considered to be very sacred. It has a lovely architecture and was built according to the Vastu Shastra.

The temple lies inside a vast complex that also accommodates structures of religious importance. It is dedicated to Lord Swaminarayan and homes a huge statue of his.

Other attractions inside the complex include audio-visual halls showing spiritual and religious films, robotics, boat-ride and a musical fountain with live performances at a step well. The complex also accommodates a lake that has holy waters from religious places across the country. The temple has visiting hours and every tourist should check with that before visiting the place. 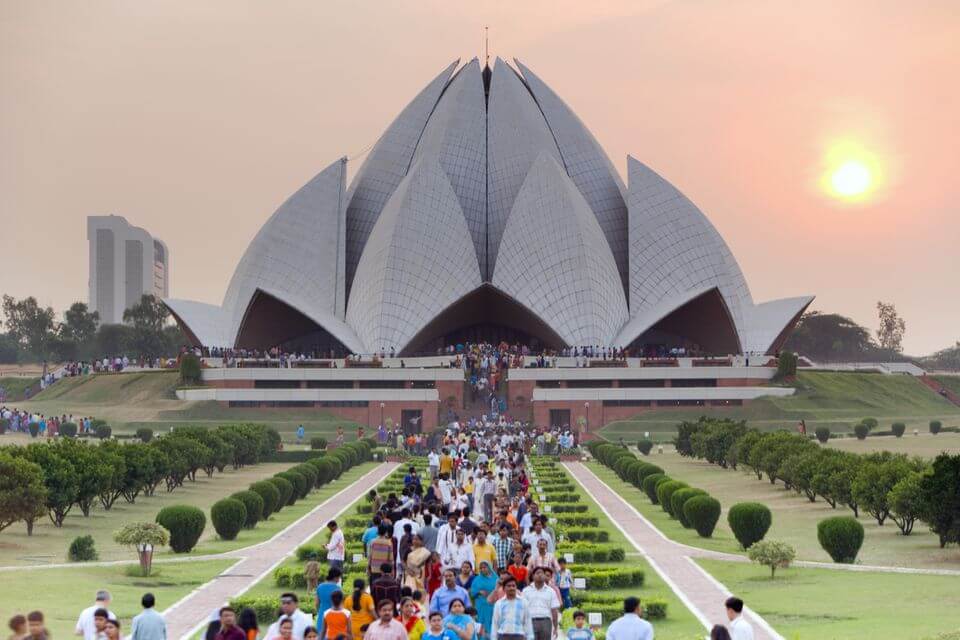 It is known to be one of world’s most visited buildings, the Lotus Temple is a flower-shaped dome structure that is considered among the most sacred places in Delhi.

It homes a number of religious scriptures, books and texts which helps the worshippers to learn the spirituality of life. People practice meditation and spiritualism inside the central hall of the temple.

The architecture of the temple is enchanting with 27 flower petals grouped in three forming nine sides that lead to the nine doors of the central hall. It is a very quiet place that aims to help people relax and unwind.

If one has noticed the huge statue of Lord Hanuman from the Karol Bagh or Jhandelwalan metro station,| they know it’s the 108-feet tall Hanuman temple that took about 13 dedicated years to complete.

The open mouth of the demon crushed under the feet of lord hanuman marks the entry to the temple. One of the most prominent temples of Delhi, this statue of Lord Hanuman is robotic and moves accordingly during the evening aarti. 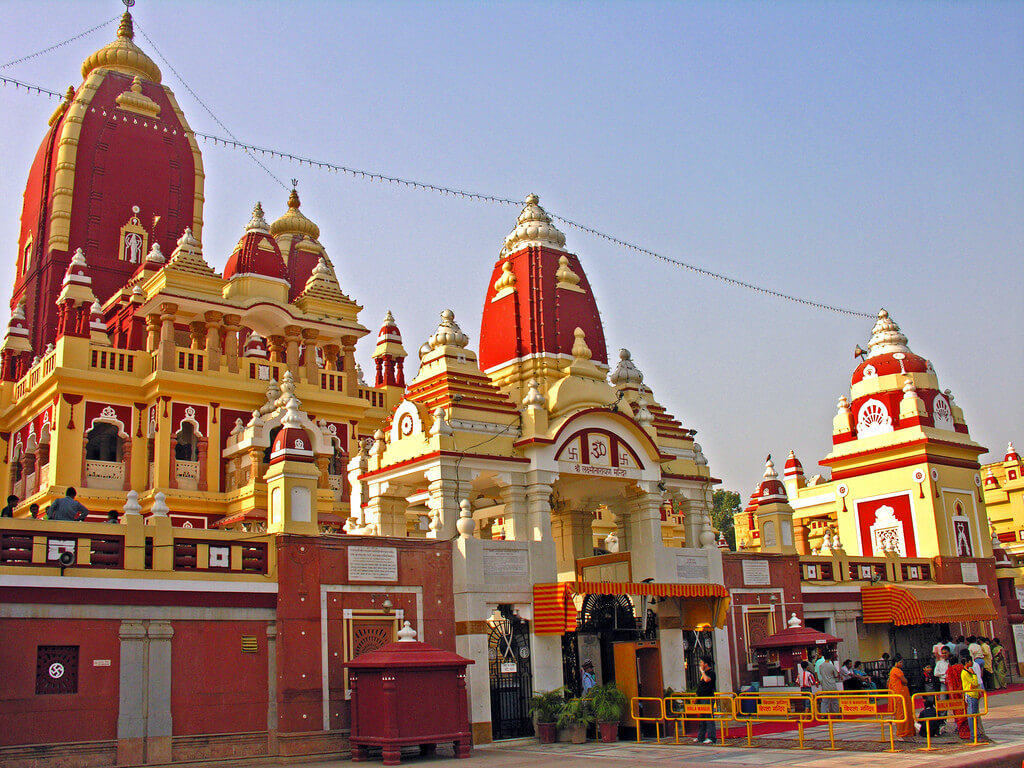 It is one of another prominent temples of Delhi is the Laxminarayan or the Birla temple which was built in the 20th century, has an Indian mythology and Swadeshi movement inspired architecture.

The temple is surrounded by a garden, fountains and discussion halls where the discourses are conducted. The temple has statues of Laxminarayan in the main temple and statues of other gods spread across the complex. The walls of the temple have mythological carvings and paintings making the corridors attractive.

The Kalka Ji Mandir dedicated to Goddess Kali is located near the Kalka Ji metro station in Delhi and stands as one of the oldest temples built in Delhi. It has a striking resemblance to a highly worshipped Hindu temple, Vaishno Devi and was built by the Marathas.

The temple has a number of regular visitors but is mostly visited during the festival of Navratri. It has an architecture leading back to the 18th century with inscriptions and statues made of sandstone, brick and marble. It is said that the goddess has self-manifested at this site and the place is very sacred. 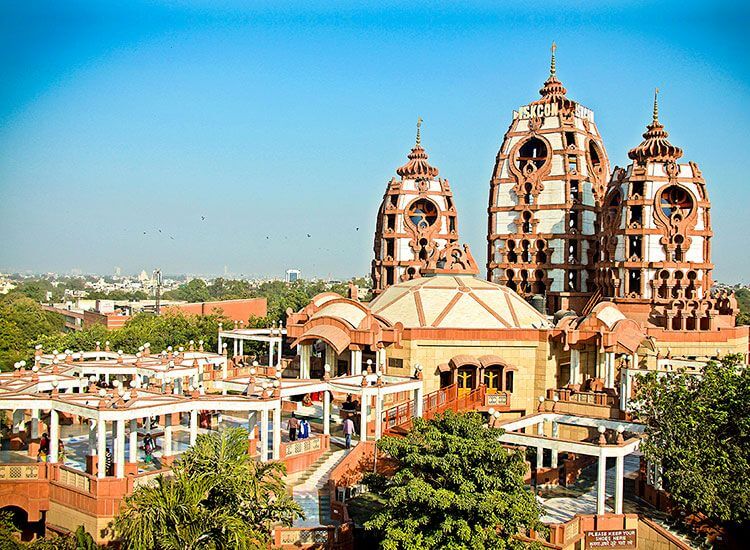 Even though there a number of ISCKON temples spread across the country, the one at Delhi is among the most visited ones. Located on the Hare Krishna Hill, the temple is dedicated to Lord Krishna and was built in the 20th century.

The location of the temple has made it easily accessible from the Nehru Palace metro station. The priests carry out the morning and evening aartis in the temple and spiritual sessions are held by the gurus or teachers who lead the devotees on the path of salvation.

The temple has different sections in the complex that are dedicated to religious books and other items for sale.

The Gauri Shankar temple located in Chandni Chowk dedicated to Lord Shiva and Goddess Parvati. It is a temple built with a lot of emotional values of a soldier who had returned home after facing the atrocities of war.

Devotees of Lord Shiva are very frequent at this place and consider it as a very important place of worship. The statue of Lord Shiva is known to age back 800 years and is decorated really well during festivals.

Delhi is highly influenced by the customs and culture of Tibet and north-east and promotes secularity throughout. The Lake Buddhist Vihara temple is a Buddhist temple on the banks of Yamuna that has a very composed and quiet environment.

The colorful and bright building of the temple surrounds the visitors with a cheerful and mesmerizing vibe. The monastery homes a giant Buddha statue and the monastery offers religious learning to the visitors.

Another well-known temple of Delhi includes Shri Digambar Jain Lal Mandir located near the Red Fort and is built with red sandstone just like the Red Fort.

Delhi has very few Jain temples and this is among the most prominent ones of them. It has a 2-floor structure with the deity and other religious proceedings happening on the first floor and an amazing view of Chandni Chowk on the second floor.

Apart from all the regular temples in Delhi, there is one such place which is known for its unique environment. More famous for marriages than religious gatherings, the Arya Samaj temple has its own place in the hearts of Delhiites.

Any newly married couple of yet to marry pairs come here to either take the blessings of the god or to tie the knot. The temple believes in true love and disregards any caste or cultural barriers in the path of love.

Jagannath Temple is one of India’s most visited and sacred temples situated in Puri, Odisha and is popular worldwide. A temple with sharp striking similarities to the Jagannath temple has been built in Delhi to enable the visitors experience the magic that exists there.

Regarded as the most important temple for the Odiya devotees, the Jagannath temple at Delhi proves to be a boon to the ones residing there. The temple witnesses prayers and chants throughout the days and nights and becomes lively with the presence of devotees.

The Chhattarpur temple in Delhi is regarded among the largest temples there and a beautiful culmination of the architecture of north and South Indian temples. The beauty of its architecture has a very different charm that attracts the tourists from around the world.

It homes 20 shrines in the complex for 20 deities and offers a beautiful sight of the surroundings. The temple has frequent visitors but is over-crowded during the festivals.

All in all, the city of Delhi has enclosed some of the most wonderful tourist destinations that attract tourists from across the world and gives them an insight into the Indian culture and traditions.

For Indian tourists, temples have always been a forever favorite as they help us meet our roots and make us a better person altogether. These temples in Delhi are a must visit for everyone making their Delhi trip even more memorable and full of positive energy.